Oak Park four-star lineman Rayshaun Benny plans to narrow his field to a handful of schools during the next few weeks.

Oak Park four-star lineman Rayshaun Benny plans to narrow his field to a handful of schools during the next few weeks, then take his official visits this fall before making his decision during the holidays.

Benny doesn’t feel rushed to make his decision and he has that luxury because of his four-star status and the fact he has 40 offers. 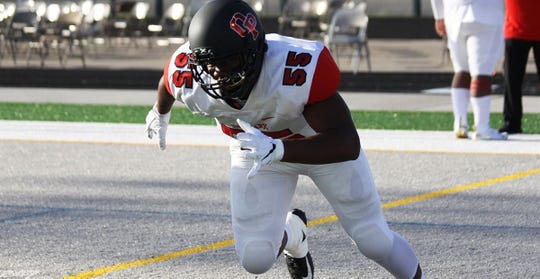 Benny enjoyed his conversation with new Michigan State head coach Mel Tucker when he attended the Spartans-Ohio State basketball game in East Lansing this past winter.

“Coach Tucker sat right by me,” Benny told The Detroit News on Wednesday. “He gives out great energy and you can tell the players will feed off that energy.”

Benny also is impressed with Michigan’s coaching staff, a reason the Wolverines are high on his list.

“I like Michigan because of the culture, and the coaches are real straight forward with you,” Benny said.

Penn State has more than a half dozen players from the state of Michigan on its roster – or will be on its roster – including Benny’s former Oak Park teammate, defensive back Enzo Jennings.

Benny said Iowa is one of the schools he likes due to defensive line coach Kelvin Bell.

Benny is ranked as the No. 20 offensive tackle in the nation in the 2021 class by the 247Sports Composite, and he is No. 14 on Rivals. But Benny says he likes playing on the defensive line more, adding on Wednesday, “that it’s great to get on the field again, working on my footwork, on my quick twitch.”

Benny is looking forward to his senior year when he will be a two-way lineman, blocking for Michigan State-bound three-star running back Davion Primm.

“Last year we had three or four backs and the seniors got the bulk of the carries,” Benny said. “I see Davion having a big year, a 1,000-yard season. He’ll make big plays when we need them. He’s big, but he also has breakaway speed where he can use a stiff arm and get to the outside.

“He’s been to camps and that’s why he got the offer (from Michigan State). A lot of stuff is based on potential and he has a high ceiling.”

Benny has followed in the footsteps of former Oak Park standout linemen JaRaymond Hall, Marquan McCall and Justin Rogers, with McCall and Rogers now at Kentucky.

Dellinger plans to make his decision on June 24, with Portage Northern running back Anthony Tyus III – No. 19 – announcing Thursday.

More: Michigan a finalist for Clarkston stars Dellinger and Spindler, but package deal is no guarantee

Tyus, ranked the No. 2 running back in the state behind Edwards, has multiple Big Ten offers, including Northwestern, Indiana and MSU.

Spindler said he plans to take all five of his official visits this fall before making his decision.