Dhue-Reid has thrown for 7,195 career yards and 95 TDs during his first three years, leading Belleville to a 34-3 record.

By the time quarterback Christian Dhue-Reid finishes his senior season at Belleville in 2020, he could be the state record-holder for touchdown passes and be No. 2 for passing yards.

Dhue-Reid has thrown for 7,195 career yards and 95 TDs during his first three years, leading Belleville to a 34-3 record and consecutive Division 1 state semifinal appearances – after the program had won just two playoffs games in more than four decades prior to his arrival. 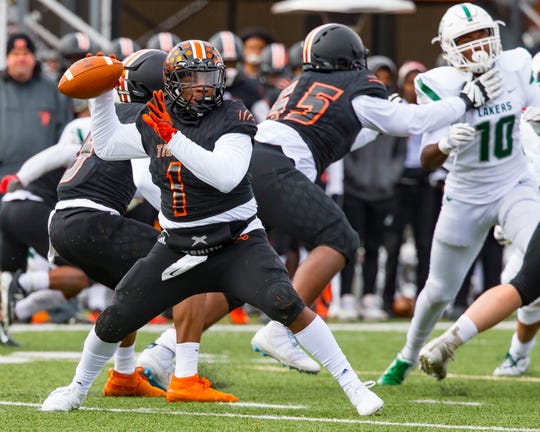 Yet, Dhue-Reid, despite his accomplishments, has no offers to play Division I or even Division II football.

“I’m kind of surprised that I haven’t got one, haven’t received one from Division I or II schools,” said Dhue-Reid, who played last season at 5-10 and 230 pounds and is working hard to cut his weight. “I feel I have to slim down and show them (college coaches) I can run the ball as well as throw it.”

Dhue-Reid certainly has been seen by college coaches – Power Five, MAC and Division II – since Belleville had some of the highest-ranked players in the country competing the last few years, including tackle Devontae Dobbs (Michigan State), receiver/cornerback Julian Barnett, (Michigan State), along with senior two-way lineman Damon Payne and senior linebacker Jamari Buddin. Payne and Buddin both made The Detroit News Dream Team last season.

“I think some people have questioned his dedication to football because of his weight,” Belleville coach Jermain Crowell said. “I think it’s because he’s short and he’s kind of plump so we’re working on getting his weight down, but I can’t do nothing about his height. This summer we’re going to try and get his weight down and hope for the best.

“He’s got a strong arm, can make the throws. I just think coaches want to see him run more for a guy his height, want to see him be more of a dual-threat guy. So we’ll run him more this year, keep him out on the field a little longer than in years past.

“No doubt, if it’s up to him he’ll throw it rather than run it every day of the week. He can run, just doesn’t do it as often as they’d like to see him. A lot of times when people run the zone read, people take to the running back and he very rarely pulls it. Normally he’ll pull it to throw it because it will be an RPO off of it.”

Dhue-Reid was named Belleville’s starter as a freshman when Dwan Mathis (now at Georgia) transferred to Oak Park.

Dhue-Reid said he quickly overcame some feelings of pressure when he was thrown in as a starter his freshman year. 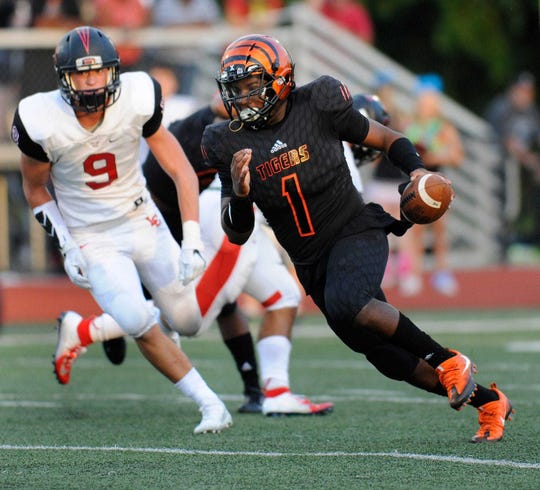 Christian Dhue-Reid: “I feel I have to slim down and show them (college coaches) I can run the ball as well as throw it.” (Photo: Jose Juarez, The Detroit News)

“I had a senior quarterback teaching me the ropes, telling me not to get frustrated, and that felt good,” Dhue-Reid said. “My confidence grew right then, getting the feel for the game while playing with older guys, then later playing with guys my own age.”

Now Dhue-Reid has the state record for TD passes in his sights, needing 30 to pass Mason Gee-Montgomery of Stockbridge, who had 124 from 2014-16.

Dhue-Reid and Belleville will showcase one of the state’s top aerial attacks, with his weapons consisting of Purdue-bound receiver Deion Burks; four-star junior Christian Rapley; speedster Darrell Johnson, who has multiple MAC offers; as well as Buddin, who will play tight end.

“Jamari used to play receiver; he’s an athlete, has great hands and can go up and get the ball,” said Crowell of the 6-2, 210-pound Buddin, who is expected to announce his college choice in July with Penn State, Michigan and Michigan State still high on his list.

Burks has developed great chemistry with Dhue-Reid, resulting in his coming up with 35 receptions for 871 yards and 12 TDs last season.

“Everybody knows Christian Dhue-Reid is the best quarterback in the state, so I’m very surprised that he hasn’t gotten any looks yet,” Burks said. “We’ve been throwing the ball around, but he’s really been working on getting his weight down. He wants to get down to that 200 range.

“Christian is very smart. He knows everyone’s position, everyone’s assignment and that really helps him. He has a very strong arm and he can lay the ball right on point. We have a very good connection on and off the field. If I’m running the fade, he knows where to throw the ball.”

Though he has aspirations to play in college, Dhue-Reid’s highest priority is getting Belleville to Ford Field for the chance to play for the state championship.

“I want to win the state championship, that’s my main goal,” he said. “It would mean a lot to my coaches, my teammates, the school and the entire community, be the first time for any senior class here at Belleville. I have to improve on my speed – that will help with our running game. I feel I can make any type throw – deep, middle, underneath – that’s all my strong suit.”

The state of Michigan is well known for its linemen this season, with five of the top six seniors competing up front, as ranked by The Detroit News. The top quarterback is at No. 20 with Zach Trainor of Walled Lake Western, followed by Northwestern-bound Brendan Sullivan of Davison at No. 21, Dhue-Reid at No. 37, Harvard-bound Conor Easthope of Ann Arbor Pioneer at No. 42 and Western Michigan-bound Mareyohn Hrabowski of River Rouge at No. 49.

Trainor completed 74.5 percent of his passes in 2019, throwing for 3,845 yards and 44 TDs with just four interceptions to earn a spot on The Detroit News Dream Team while leading his team to the Division 2 state semifinals.

Sullivan showed his ability as a dual-threat QB by completing 14-of-19 passes for 290 yards while picking up 40 yards on 10 carries in a 35-25 Division 1 state title game win over Brighton.

Hrabowski is also a dual-threat QB, running for 175 yards (15 carries) in a 30-7 Division 3 state championship upset win over Muskegon, scoring on a 40-yard run while also breaking loose for a 48-yard run to set up a score during a 10-play drive when he connected on two third-down completions.

Easthope, who originally committed to Western Michigan, led Pioneer to its first state playoff appearance since 2015.