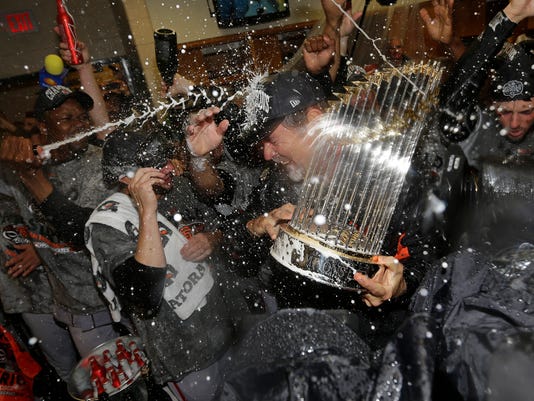 At a quarter to 9 p.m. on Wednesday, less than three hours after his team clinched the American League pennant, the manager of the Royals left Kauffman Stadium in search of dinner. Ned Yost piloted his family toward the Capitol Grille on the Country Club Plaza. Awaiting him was a reception he had neither expected nor ever before experienced.

Before Yost could dine on steak, lobster mac and cheese and french fries, he feasted on a wave of adulation. The reaction was immediate, intense and emblematic of the good feeling inspired by the team's berth in the World Series. Once upon a time, Yost used a fake name at Starbucks to avoid recognition.

Now he cannot dodge it.

The evening called for a victory lap. The Royals have stormed through October, with eight victories in eight playoff games, the only team ever to complete that feat. They bounced the Orioles out of the AL Championship Series on Wednesday and ignited a celebration that swept both east and west across the plains.

The next morning, Yost rose before the sun. By 6 a.m. he was on the phone with his close friend Jeff Foxworthy. And his boss, GM Dayton Moore, was up at 4:45 a.m. There was business to attend to, even as a city and region woke up from the hangover induced by this baseball club.

Next up are the Giants in the World Series, starting Tuesday.

When the Royals clinched a berth in the AL wild-card game on Sept. 26, they ended the longest postseason drought in the major North American sports. When they recovered from a four-run deficit against the A's in the play-in game, they infused themselves with a confidence that has yet to waver. The victory ignited this unprecedented winning streak.

So much has changed in these two weeks. Once lampooned for their lack of offensive firepower, the Royals now receive garlands for their defense. The Wall Street Journal branded Yost as a "dunce" before this series started. But he out-foxed Orioles manager Buck Showalter during the past four games. Yost displayed an evolved sense of bullpen deployment as his club rolled.

On Thursday afternoon, Moore and Yost settled into chairs in the ground floor of Kauffman Stadium. On a table before them sat the 2014 William Harridge Award, given each year to the champions of the American League. Moore glanced at the trophy before answering a question about its meaning.

"It's a lot of pride," Moore said. "But at the same time, we know it's a really special opportunity moving forward.

"And we're looking forward to that challenge."

Yost remarked on the beauty of the trophy. The day before, owner David Glass had also basked in the hardware's glow. But, Yost relayed, Glass reminded of the ultimate goal. "He said, 'I'd sure like to get the one that's round with all the flags on it,'" Yost said. "I said, 'Just hang on.'"

The new president of baseball operations for the Dodgers, Andrew Friedman, plans to hire a new general manager and retain Don Mattingly as manager.

... Jeff Banister, after 29 years as a player coach and instructor in the Pirates system, was introduced as Rangers manager. "The best opportunities to come along are the ones you're not looking for," he said.