Tim Hudson starts for the Giants against the Royals' Jeremy Guthrie in Game 3. 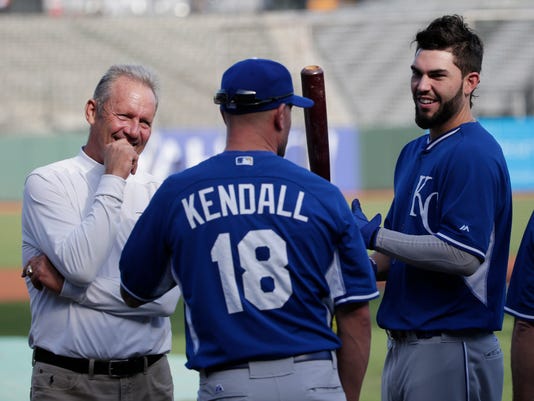 San Francisco — Eric Hosmer loaded up, launched a long fly and watched it sail toward McCovey Cove. Way out there in right field, near the 421-foot mark, the ball bonked off the brick wall.

"We were definitely trying to hit 'em," the Kansas City first baseman said. "We took turns trying, but no one did."

Even so, Hosmer liked what he saw during a workout Thursday as many Royals got their first look at San Francisco's waterfront ballpark.

Starting in Game 3 of the World Series on Friday against the Giants, they might also discover what makes AT&T Park so unique.

"It's a little quirky out there," San Francisco manager Bruce Bochy said.

Just wait until someone trips over a bullpen mound chasing a foul ball. Or somebody loses a fly in the mist that wafts above shallow center. Or those swirling winds turn a routine popup into an all-out scramble.

Who knows? Might even get a crazy carom off that odd-shaped brick facade on the right-field wall, resulting in the first Series inside-the-park home run since 1929.

"With that brick wall and that chain-link fence, the ball go could go anywhere," Royals outfielder Lorenzo Cain said.

Tim Hudson starts for San Francisco against Jeremy Guthrie as the Royals play their first game in San Francisco since 2005, when they took two of three. Buddy Bell was their manager back then, Tony Graffanino batted third and Jeremy Affeldt was in the bullpen.

The 35-year-old Affeldt now pitches for the Giants and came on in relief Wednesday night in a 7-2 loss. He said he figured the Royals could handle the new park.

"That's an athletic team over there. So I think they can make adjustments. I don't think we'll go in thinking that they're at a disadvantage because of not being at our ballpark," he said.

Seven players on the Royals' 25-man roster have played at AT&T Park with other teams. Of the most frequent visitors, Josh Willingham has hit .352 with five homers in 16 games and Omar Infante has batted .307 in 19 games, STATS said.

Among the pitchers, Guthrie did fine in two starts and Jason Frasor made two relief appearances.

Cain played one game at the stadium in 2010 when he was with Milwaukee. The AL Championship Series MVP practiced with coach Rusty Kuntz to gauge the bounces.

"You have no idea of where it's going," Cain said.

"It's a big park; right field is tricky. The wind does a lot of different things in the outfield, so our guys are used to it," he said. "It's tough. It's tough out there. But everybody's a professional. I don't think it will be a factor."

One thing will change, for sure. With no designated hitter in the NL park, Morse and Kansas City's Billy Butler will lose their spots — Morse drove in a run during a 7-1 win in the opener, while Butler already has three hits and a pair of RBIs.

With tight foul ground, gusts that whip off the bay, twilight starts and pesky seagulls that hover around in the late innings, a lot of balls become adventures in San Francisco. In 2007, Ichiro Suzuki hit the first inside-the-park home run in an All-Star game when his shot off the right-field wall took a weird ricochet.

There have been nine inside-the-parkers in World Series play. Lou Gehrig and Casey Stengel are on the list, and Mule Haas of the Philadelphia Athletics hit the last one.

Plus, postseason is frequently a weather adventure in the Bay Area. Players need to pack for all sorts of conditions — short sleeves, hoodies, hats and gloves.

During the NLCS, Bochy said the teams played in the toughest winds of the season. Right fielder Hunter Pence had no chance trying to track a fly ball by St. Louis' Kolten Wong that landed for a triple.

"You play this game, you play in a lot of different ballparks and you find a way to adjust," Pence said this week. "I think everyone's going to enjoy it."