Marlins' Gordon unimpressed by his .426 average

Major league batting leader Dee Gordon goes about his business so quietly his .426 average was news to Fredi Gonzalez.

Marlins' Gordon unimpressed by his .426 average 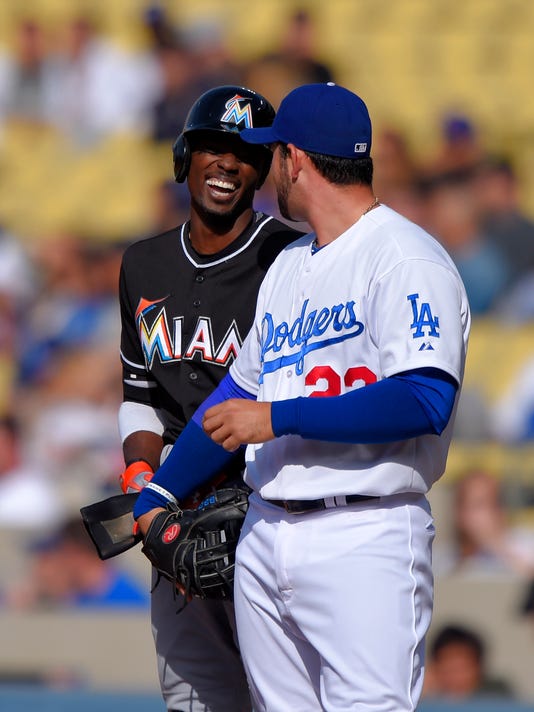 Miami’s Dee Gordon, left, has 58 hits through his team’s first 32 games, the most since Hank Aaron in 1959.(Photo: Mark J. Terrill / Associated Press)

Miami — Major league batting leader Dee Gordon goes about his business so quietly his .426 average was news to Fredi Gonzalez.

The Atlanta Braves manager was startled to discover the eye-popping statistic while preparing for the start of his team's weekend series against Gordon and the Miami Marlins. The teams are NL East rivals, but Gonzalez said he was unaware of Gordon's hitting tear because the Marlins spent the past week on the West Coast.

"We hadn't even heard about it," Gonzalez said Friday. "These guys go off the radar, and nobody has even talked about it. That little son of a gun. He's a good player."

Start spreading the news: The speedy Gordon began the weekend with a lead of 59 points over the second-best hitter in the majors, the Dodgers' Adrian Gonzalez at .367.

Gordon, the son of former big league pitcher Tom Gordon, also led the majors with 58 hits. It has been 56 years since a player had more hits through his first 32 games, according to STATS. That player was Hank Aaron.

The Marlins acquired Gordon in a trade with the Dodgers after he led the majors in stolen bases last year. The seven-player deal also sent right-hander Dan Haren to the Marlins, while the Dodgers acquired pitching prospect Andrew Heaney.

While Gordon came to Miami with a modest career average of .272 through four seasons, he shows no sign of cooling off. He had four hits Wednesday against the Dodgers — his 10th game with three or more — and began the weekend batting .507 over his past 16 games.

But don't try to ask Gordon if he can become the first batter to hit .400 since Ted Williams in 1941. The otherwise genial second baseman dislikes talking about himself, especially his stats.

He was headed for batting practice Friday when a TV cameraman asked him how he has been so hot lately.

"Wrong question," Gordon said pleasantly. "I don't want to talk about it. We've got a big series coming up here."

His bat has been anything but silent. Gordon began a 10-game homestand Friday with a .509 average at Marlins Park. He had 29 hits at home, the most by any player in his first 14 home games since 1914.

He legs out hits with his speed, but he also had 10 doubles, two triples and a .529 slugging percentage. He's fourth on the Marlins with 12 RBIs even though he bats leadoff.

Gordon has also contributed a succession of highlight-reel plays at second base while committing only one error. But teammates rave mostly about his bat.

"It looks like he's playing in Williamsport right now, the way he's playing," left fielder Christian Yelich said. "He's on one of those Little League stretches where you get a hit every time you go up to the plate. And he has been doing it all year."