Jake Arrieta pitched the sixth no-hitter in the majors this season and second against the Dodgers in 10 days. 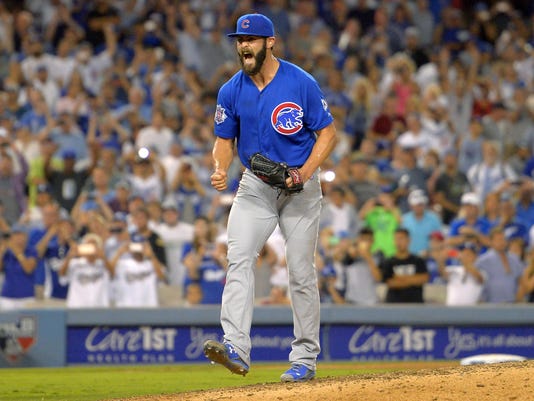 Los Angeles — Jake Arrieta pitched the sixth no-hitter in the majors this season and second against the Los Angeles Dodgers in 10 days, leading the Chicago Cubs to a 2-0 victory Sunday night.

Arrieta (17-6) struck out a season-high 12 and became the first 17-game winner in the big leagues by throwing baseball’s third no-hitter in less than three weeks.

Astros right-hander Mike Fiers blanked the NL West-leading Dodgers 3-0 on Aug. 21. Never before had Los Angeles been no-hit twice in one season.

Arrieta got the benefit of a close call for the official scorer in the third inning, when Kike Hernandez reached on a fielding error by second baseman Starlin Castro.

Hernandez hit a one-hopper at Castro, who tried to play it on the short hop. The ball bounced off him and rolled away, allowing Hernandez to reach first.

The play was ruled an error but probably could have gone either way.

“I thought it was a hit,” Arrieta said. “Tough play. Hernandez hit it well. Tough short hop for Castro. They scored it an error, thankfully so, and I was able to finish it off.”

Hernandez was sacrificed to second before Arrieta struck out Jimmy Rollins to end the inning.

Carl Crawford nearly broke up the no-hit bid with two outs in the seventh, but Castro caught Crawford’s line drive up the middle with a running grab.

With the Dodger Stadium crowd roaring, Arrieta struck out all three batters in the ninth: Justin Turner, Rollins and Chase Utley. Those were the same three hitters — in a different order — that Fiers retired to finish off his gem.

With his 116th pitch, Arrieta fanned Utley on a breaking ball to end it. The 29-year-old pitcher was mobbed by teammates near the mound, and they jumped their way in a huddle over to near the Cubs’ dugout where they high-fived Arrieta.

“It went by so quick, really,” Arrieta said. “Feels like that could have been five innings the way that played out. The stuff was good, commanded the ball well. Kind of speechless right now.”

He became the first Cubs pitcher to throw a no-hitter since Carlos Zambrano on Sept. 14, 2008, against Houston in a game that was moved to Miller Park in Milwaukee because of Hurricane Ike.

“I think it will be more special the longer it sets in,” Arrieta said. “Come a long way, keep getting better.”

Arrieta walked one and helped the Cubs end a four-game skid on the last night of their six-game West Coast trip. He finished August with a 6-0 record, tying Boston’s Joe Kelly as the only pitchers with that many wins in the month.

The right-hander lowered his ERA to 0.43 in August while becoming the first Cubs pitcher with that many wins in the month since Rick Sutcliffe in 1984.

Kris Bryant hit a two-run homer in the first inning off Alex Wood. The Cubs had 13 hits and ended the Dodgers’ five-game winning streak.

Wood (9-9) gave up eight hits in six innings. The left-hander struck out seven and walked one.

Hisashi Iwakuma of the Seattle Mariners pitched a no-hitter on Aug. 12 in a 3-0 win against Baltimore. Cole Hamels of Philadelphia, San Francisco’s Chris Heston and Washington’s Max Scherzer also have thrown no-hitters this season.

Arrieta threw a one-hit shutout against Cincinnati last Sept. 16 at Wrigley Feld, allowing his first hit to Brandon Phillips with one out in the eighth.

Last year, Arrieta became the first Cubs pitcher since 1950 to take a no-hitter into the seventh inning three times in one season. Two of those came in consecutive starts, making him the first to do so since Toronto’s Dave Stieb in June 1988.