It’s supposed to be almost 100 degrees at Dodger Stadium for the opener Tuesday night. 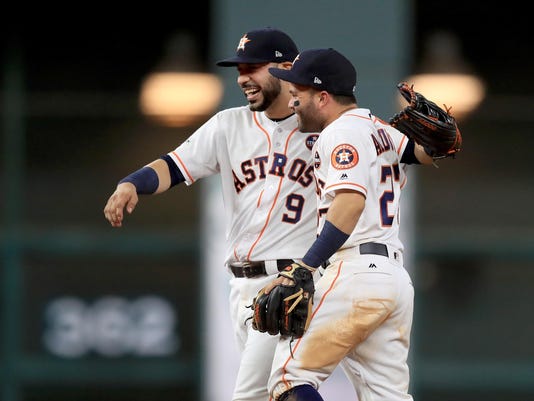 Jose Altuve, right, and Marwin Gonzalez will try to give the Astros their first World Series title, or at least help them win their first game.(Photo: Ronald Martinez / Getty Images)

A pair of 100-win teams for the first time in nearly a half-century. Hollywood Walk of Fame vs. Texans who wear the star. A little extra Magic, plus Nolan back in the fast lane.

This is one hot World Series — the Houston Astros, fresh off a Game 7 victory over the Yankees, taking on the narrowly favored Los Angeles Dodgers, well-rested after a postseason romp.

Could be real steamy, too. It’s supposed to be almost 100 degrees at Dodger Stadium for the opener Tuesday night, maybe the hottest temperature ever at a World Series game.

“Now we chase the ultimate prize,” Astros manager A.J. Hinch said. “There’s two teams standing. It’s a race to four wins now. At the start there’s a race to 11, we’ve got seven of them down.”

At least the familiar October chill that makes players and fans shiver shouldn’t be an issue outdoors in sun-baked California or under the retractable roof at Minute Maid Park.

Not that young stars Cody Bellinger and Carlos Correa would mind, nor would old pros Carlos Beltran and Chase Utley, nor top starters Dallas Keuchel and Yu Darvish.

Because a chance to win a ring doesn’t come very often — these teams that have already played more than 700 games against each other over the years already know that.

The Astros have never won the crown. They’re playing for a whole region, with the Houston Strong patches on their uniforms representing an area hit hard by Hurricane Harvey.

“There’s a lot of people that are really hurting right now in this city,” said Verlander, the ALCS MVP.

“And it gives the city something to rally around and gives people something to cheer for that otherwise may not have a lot to be hopeful for.”

The Dodgers haven’t been in the World Series since 1988, when Kirk Gibson’s bat, Orel Hershiser’s arm and Tommy Lasorda’s moves outdid Oakland for the crown.

Now with Lakers great Magic Johnson as a part-owner, this L.A. team that led the majors with 104 wins is hoping to bring back the glory days that began in Brooklyn.

“I just want to win a World Series,” Kershaw said after the Dodgers dethroned the Chicago Cubs in Game 5 of the NL Championship Series.

“I know more than anybody how hard it is to get there. So, I’m definitely not taking this one for granted.”

The Astros, the major leagues’ highest-scoring team this year, have never even won a World Series game. They only time they made it this far was 2005, when a club that included Jeff Bagwell, Craig Biggio, Roger Clemens and Andy Pettitte got swept by the White Sox.

In fact, a World Series prize is the one piece of hardware missing from the trophy case from the Lone Star State. Texas teams have won the Super Bowl and championships in the NBA, NHL, college football and men’s and women’s basketball, but never in baseball.

Under the leadership of executive Nolan Ryan, the Texas Rangers came within one strike in 2011 before losing to St. Louis. The Ryan Express, who once pitched a no-hitter for Houston against the Dodgers, is currently an Astros exec.

The Astros posted 101 wins this year — not since Baltimore (108) and Cincinnati (102) in 1970 has the World Series matched teams who reached triple-digits.

These teams last met in 2015, when the Astros swept a three-game series at home. But they’d seen a lot of each other in the past.

Overall, the Dodgers are 388-323 vs. the Astros. Houston debuted as the Colt .45s, a National League expansion team in 1962, beat the Dodgers in a one-game playoff for the NL West championship in 1980 and eventually moved to the AL in 2013.

That first year in the AL, the young Astros got pounded and lost 111 times. But with smart drafts and player development, Houston emerged as a power. Hinch’s club capped its rise by beating Boston in the AL Division Series, then stopping the Yankees 4-0 Saturday night in Game 7 of the ALCS.

The Dodgers, with a major league-high $226 million payroll, won their fifth straight NL West title this year, then went 7-1 in the playoffs against the Diamondbacks and Cubs under manager Dave Roberts.

The result? Their first pennant since 1988 — the year Kershaw was born.

It appears the Mets have settled on their choice for a manager.

Several media outlets are reporting the team has offered the job to Indians pitching coach Mickey Callaway. The New York Post was the first to report the Mets were in talks with Callaway, saying a deal is being finalized.

With his contract set to expire, Terry Collins stepped down at the end of the season after seven years as Mets manager and accepted a position as a special assistant to general manager Sandy Alderson.

The 42-year-old Callaway has been Cleveland’s pitching coach for the past five seasons under highly successful manager Terry Francona.

Led by ace right-hander Corey Kluber, the Indians led the major leagues with a 3.30 ERA this season, one year after reaching the World Series.

The Red Sox have hired Astros bench coach Alex Cora to be their manager.

The team made the announcement Sunday, a day after Cora’s Astros reached the World Series.

Cora replaces John Farrell, who was fired this month despite winning back-to-back AL East titles. Farrell’s teams won the 2013 World Series, finished last twice and then in each of the past two years won the division but got eliminated in the first round of the playoffs.

A native of Puerto Rico, Cora is the first Hispanic manager in Red Sox history.

(All games start at 8 p.m.; all games televised by Fox)