Granderson, the former Tiger, was 1-for-15 with eight strikeouts during the playoffs. 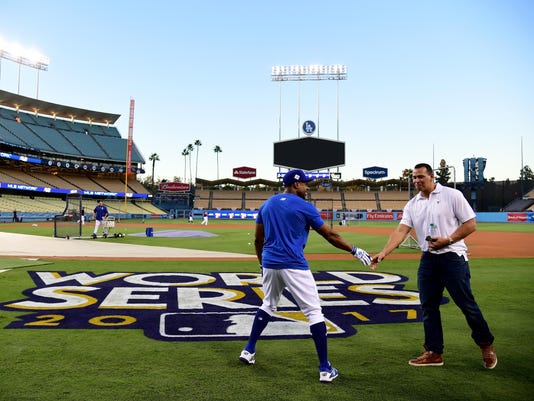 Los Angeles — Shortstop Corey Seager and right-hander Brandon McCarthy were added to the active roster for the World Series on Tuesday by the Los Angeles Dodgers, who dropped outfielder Curtis Granderson and backup catcher Kyle Farmer.

Seager injured his back while sliding in Game 3 of the National League Division Series, causing him to miss the Championship Series.

McCarthy has appeared in just three games, totaling six innings, since July 20 because of a right knee injury and a blister on his pitching hand. His last game was Oct. 1.

Manager Dave Roberts said McCarthy gives the Dodgers an extra arm in the bullpen. The team’s depth allowed it the luxury of leaving off the struggling Granderson, the former Tiger who was 1-for-15 with eight strikeouts during the playoffs. He has struggled mightily since coming over from the New York Mets in an August trade. This was to be his third World Series, including with the Tigers in 2006.

“To win this series, I think that it was the best for us,” Roberts said.

With Seager returning, the Dodgers also have left-handed hitter Joc Pederson, who can play all three outfield positions, pinch-hitter Andre Ethier, and the offense of Kike Hernandez and Chris Taylor to offset Granderson’s absence.

McCarthy has stayed sharp by throwing two innings in each of three simulated games since the regular season ended.

“With what we’ve seen of his sinker, the cutter, the curveball, it just makes sense,” Roberts said. “Being a veteran player, I don’t think that the moment is going to be too big for him. We’re still confident that he’ll be productive.”

Farmer was a third catcher behind Yasmani Grandal and Austin Barnes.

“We didn’t change ours precisely because we feel comfortable with the group that we’ve had moving forward and some of the guys that were on the borderline for us hadn’t done anything for the last couple weeks,” Astros manager A.J. Hinch said. “You can throw bullpens and live BPs but it’s a little different walking out there and facing Justin Turner or facing (Yasiel) Puig or facing (Cody) Bellinger.”