The Twins continued their quest for power during the offseason by agreeing to terms with veteran designated hitter Nelson Cruz on Thursday. 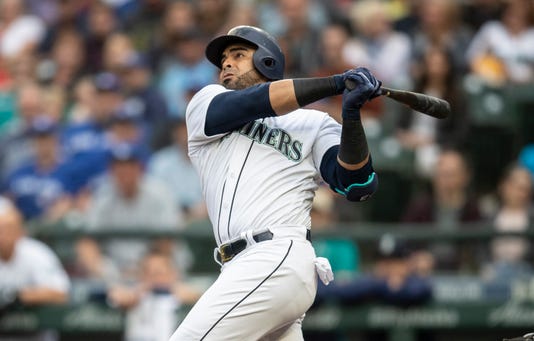 Nelson Cruz is bringing his "Boomstick" to the AL Central after reportedly signing a one-year deal with the Minnesota Twins.(Photo: Stephen Brashear, Getty Images)

The Twins continued their quest for power during the offseason by agreeing to terms with veteran designated hitter Nelson Cruz on Thursday.

Cruz, 38, has 203 home runs over the past five seasons, more than any other player in Major League Baseball.

During that time, Cruz hit at least 40 homers in a season three times. When Brian Dozier hit 42 homers in 2016 it was the first time a Twins player reached 40 since Harmon Killebrew in 1970.

Cruz also had three 100 RBIs seasons over the past five years. The last time the Twins had a player drive in that many runs was Josh Willingham with a 110 in 2012.

And Cruz has a cool nickname — “Boomstick.” No current Twin can boast of such a moniker.

According to a major league source, Cruz will get a one-year contract worth $14.3 million with a club option for 2020 worth $12 million. The Twins’ policy is to wait until a player passes a physical before making deals official.

The Rays were among teams also interested in Cruz.

The Twins didn’t have designated hitter high on their list of priorities this offseason, but indicated they would welcome someone like Cruz for the right price. Cruz’s relationship with general manager Thad Levine, from their time with the Rangers, undoubtedly played a role in him coming to the Twin Cities.

On his Twitter (@ncboomstick23) and Instagram accounts, Cruz posted a message that read, in part: “I would like to thank the Mariners ownership especially (owner) John (Stanton) for all you have done for me and my hometown, the organization, the coaching staff … and most importantly the fans for all of your support over the last four seasons. Seattle, you hold a special place in my heart as you embraced me from the start even when skeptics said I would not succeed in a pitcher friendly park.”

With Cruz now in the fold, the Twins are expected to turn their attention to adding pitchers. They could use bullpen help — although they are expected to convert a starter or two into relievers in 2019 — and could add a starter in the right deal.

Cruz, a six-time All-Star, hit 37 home runs for Seattle last season after leading the American League with 119 RBIs in 2017; he made the All-Star team both years. He is the third power bat added by the Twins during the offseason. First baseman C.J. Cron (30 home runs for Tampa Bay) was picked up off waivers and free agent second baseman Jonathan Schoop (32 for Baltimore in 2017) got a one-year, $7.5 million deal.

A native of the Dominican Republic who became an American citizen, Cruz has 360 career home runs. Before Seattle, Cruz was in Baltimore for one season (an American League-leading 40 home runs in 2014) and Texas for eight seasons, after breaking in with Milwaukee.

During 2013, his final season in Texas, Cruz was suspended for 50 games for using performance-enhancing drugs. He spent 2014 with the Orioles before getting a four-year, $57 million deal in Seattle.

Cruz did not test positive for PEDs, but was suspended by Major League Baseball because he got treatment from the Florida-based Biogenesis Clinic that was linked to PED use by major league players. When he signed with the Mariners, he said a news conference that, “It was something about my health that made me go in that direction. I lost 40 pounds during the offseason. I went to different doctors – they didn’t find what was going on with me, why I kept losing weight.

“And finally they found I had a parasite. And then spring training was close. That’s why I made the decision.”

The Nationals agreed to terms on a two-year, $19 million contract with right-hander Anibal Sanchez.

The deal includes a team option for 2021.

Sanchez, 34, will add depth to Washington’s new-look rotation after boosting his appeal with a comeback season for NL East rival Atlanta. The Nationals signed Patrick Corbin to a six-year deal earlier this month.

Sanchez said the two-year deal was important at his age.

He said another factor was maintaining his relationship with catcher Kurt Suzuki, who he said was important to his success with the Braves in 2018. Suzuki signed a two-year, $10 million deal with Washington last month.

Sanchez, a native of Maracay, Venezuela, was perhaps the Braves’ most consistent starter as he posted a 2.83 ERA in 25 games, including 24 starts. He was 7-6 and had 135 strikeouts in 136.2 innings. It was a remarkable turnaround after Sanchez struggled in 2017 with a 6.41 ERA with Detroit.

The 2018 ERA was the second-best of his career, behind his 2.57 mark in 2013 with Detroit, and sixth-lowest among NL pitchers with at least 24 starts.