The Yankees pitching great was picked by all 217 voters totaled through Monday afternoon by Ryan Thibodaux’s Hall of Fame vote tracker, about half the expected ballots. 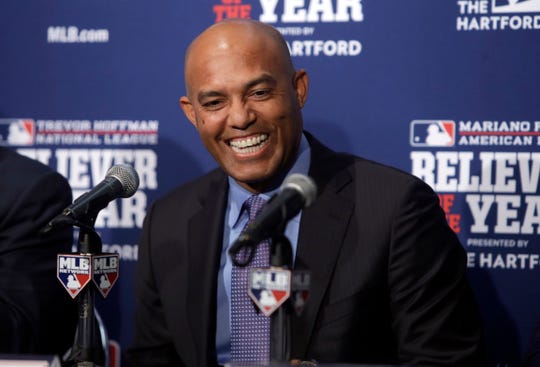 Mariano Rivera figures to make quick work of his Hall of Fame ballot appearance, just as he did of opposing batters, and could even set another record when voting is announced Tuesday: for highest percentage of ballots.

No one has ever been a unanimous Hall of Fame selection. Ken Griffey Jr. holds the mark for the top percentage at 99.32 when he was on 437 of 440 ballots two years ago.

Rivera was picked by all 217 voters totaled through Monday afternoon by Ryan Thibodaux’s Hall of Fame vote tracker, about half the expected ballots.

Bill Ballou of the Telegram & Gazette in Worcester, Massachusetts, wrote in November that because he didn’t plan to vote for Rivera, he wouldn’t submit a ballot.

“He has had a long career, albeit in a role I do not value, a role I equate with a PAT kicker in football or a shootout guy in hockey,” Ballou wrote. “Rivera could be the first Hall of Famer elected unanimously. I think I’m right about closers, but not so much that I would deny Rivera a chance to be the first unanimous Hall of Famer.”

Roy Halladay also appeared headed to election in his first appearance on the Baseball Writers’ Association of America ballot, while Edgar Martinez seemed likely to join them in his 10th and final appearance. Mike Mussina also could gain the honor, but Barry Bonds, Roger Clemens and Curt Schilling probably will fall short while getting closer.

Rivera set the career saves record with 652 in 19 seasons, plus 42 more in the postseason. The New York Yankees didn’t even wait until his final game to retire his No. 42 — he was the last player in the major leagues to wear that number, grandfathered when No, 42 was retired in honor of Jackie Robinson in 1997.

Adding Sonny Gray to a rotation already improved by the offseason acquisitions of Tanner Roark and Alex Wood has the Cincinnati Reds thinking about their first NL Central title since 2012.

“I think we have a group of guys that can hold their own with anybody in this division. I really do,” president of baseball operations Dick Williams said Monday after finalizing a trade with the New York Yankees for Gray. I know our guys feel a sense of confidence.”

Gray’s unsuccessful stretch in New York ended when the Yankees traded the pitcher after the 29-year-old right-hander agreed to a contract with the Reds that added $30.5 million from 2020-22 and includes a 2023 club option.

After finishing last in the NL Central at 67-95, the Reds acquired Roark from Washington and Wood from the Los Angeles Dodgers, joining a rotation that includes Anthony DeSclafani and Luis Castillo.

Cincinnati and New York agreed to a deal Friday, pending a window for Gray to reach a long-term deal. Gray and the Yankees settled on a $7.5 million, one-year contract on Jan. 11 that avoided salary arbitration. .

You didn’t need much of a Spidey sense at Astros outfielder Josh Reddick’s wedding to realize that the ballplayer has an affinity for a certain web-slinging superhero.

KTRK-TV reports Reddick married Georgette ‘Jett’ Elkins at the Jekyll Island Club Resort in Georgia on Saturday during a Spider-Man-themed wedding. Famous for wearing a Spider-Man shirt under his baseball jersey, Reddick wore a Spider-Man vest under his suit. The webslinger’s colors and logo were also featured on the couple’s wedding cake.