Vázquez was taken into custody by athorities on one count of computer pornography/solicitation of a child and one count of providing obscene material to minors. 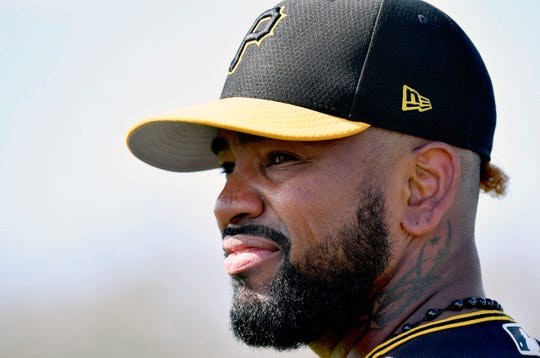 Vázquez was taken into custody by Pennsylvania State Police on one count of computer pornography/solicitation of a child and one count of providing obscene material to minors, both felonies, stemming from an investigation in Florida. He was later charged in Westmoreland County, which is located east of Pittsburgh, with felony counts of statutory sexual assault, unlawful contact with a minor and corruption of minors and a misdemeanor count of indecent assault of a person under 16 years old.

It was not immediately known whether the charges in Pennsylvania were related to or independent of the Florida investigation.

“We are in the process of reviewing both the Pennsylvania and Florida charging documents, as well as the underlying facts of the matter,” Vázquez’s lawyers, Jay Reisinger and Michael Comber, said in a statement. “At this time, any comment would be premature.”

Vázquez was arraigned via video from the Allegheny County jail, wearing a dark-colored sweatshirt and glasses, according to the Pittsburgh Post-Gazette. He was denied bond, with the judge saying she believed Vázquez was a flight risk, the newspaper reported.

The Florida Department of Law Enforcement said it began investigating the 28-year-old in August after learning of an alleged sexual relationship between Vázquez and a teenage girl living in Lee County, Florida. Vázquez, who lives in Saint Cloud, Florida, and the victim began the relationship when the girl was 13, authorities said.

The girl, now 15, allegedly received a text message from Vázquez in July in which he was performing a sex act. Vázquez also texted the girl to ask if she wanted to meet for a sexual encounter following the end of the baseball season, according to police.

According to the affidavit, while Vazquez’s face is not visible in the images sent to the victim, authorities were able to identify him by matching tattoos in the picture against tattoos of Vazquez they discovered on the internet. The victim’s mother discovered the communication in July and texted Vazquez to tell him the person he was communicating with was a minor, the affidavit said. Authorities matched the evidence to Vázquez’s phone number.

Authorities arrested Vázquez after executing a search warrant Tuesday morning at his Pittsburgh apartment. Police said they seized electronic devices that will be used in the investigation. Vázquez is expected to be extradited to Florida.

A two-time All-Star pitcher from Venezuela, Vázquez is 5-1 with a 1.65 ERA and 28 saves for the Pirates this season.

“We take this matter, and these charges in particular, extremely seriously,” Pirates president Frank Coonelly said in a statement.

The baseball commissioner’s office placed Vázquez on administrative leave under its agreement with the players’ association on handling domestic violence, sexual assault and child abuse. The union declined to comment.

Administrative leave is not considered discipline. Vázquez goes on the restricted list and continues to receive his $4 million salary but is ineligible to play.

The arrest is the latest setback in a turbulent season for the Pirates, who are last in the NL Central.

Vázquez and reliever Kyle Crick were both suspended a game last week after getting into a physical altercation in San Francisco. Crick injured the index finger of his right hand during the altercation and underwent season-ending surgery. Crick maintained Vázquez threw the first punch, with general manager Neal Huntington condemning both players for their actions.

Vázquez is in the second season of a $22 million, four-year contract that includes team options for 2022 and 2023.

“It’s something that hits home,” Pirates pitcher Chris Archer said. “I have a 14-year-old sister. In the U.S., you’re innocent until proven guilty. Until due process is completely played out, we’re hoping that this stuff’s not true.”