Rob Manfred said MLB's investigation began because of concern over the initial statement but was ongoing. 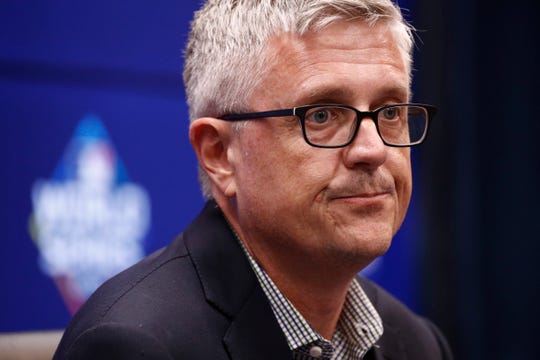 Washington — Major League Baseball is conducting a wider probe of the Houston Astros that goes beyond the assistant general manager who was fired this week for inappropriate behavior, concerned about the team’s initial denial.

“There are aspects of this that go beyond the incident that’s been dealt with in terms of the employment of the individual,” Commissioner Rob Manfred said Friday before Game 3 of the World Series. “We need to gather additional facts.”

Sports Illustrated reported Taubman repeatedly yelled toward a group of female reporters about closer Roberto Osuna, who was suspended for 75 games last year for violating MLB’s domestic violence policy and then was traded from Toronto to Houston. Taubman shouted, “Thank God we got Osuna!” according to SI, which said he made similar remarks several times during Saturday night’s celebration, punctuating them with a profanity.

More: Donald Trump critic, not the president, to throw out first pitch at World Series

Houston issued a statement Monday accusing the SI reporter of making up the story. Taubman apologized for his language in a statement Tuesday, and MLB and the team started an investigation.

Astros general manager Jeff Luhnow apologized Thursday for the team’s initial response, saying it was wrong, and the team apologized to the SI reporter, the magazine and people who saw the incident, and to those who were offended.

“I think it was important that they recognized that they had made a mistake, that they issued an apology, and they dealt with the individual situation in a decisive way,” Manfred said.

Manfred said MLB’s investigation began because of concern over the initial statement but was ongoing.

“I would say that there are a variety of issues,” Manfred said. “There are other things that we want to talk to the Astros about.”

“I don’t want there to be an expectation that this piece of it is going to be as quick as the last piece because there’s more to it,” Manfred said.