The 26-year-old right-hander, who became a free agent last fall, was 3-2 with a 4.85 ERA last season in 46 relief appearances for the Tigers.

The 26-year-old right-hander was 3-2 with a 4.85 ERA last season in 46 relief appearances for the Detroit Tigers. He became a free agent last fall after he was assigned outright to Triple-A Toledo on Oct. 24. 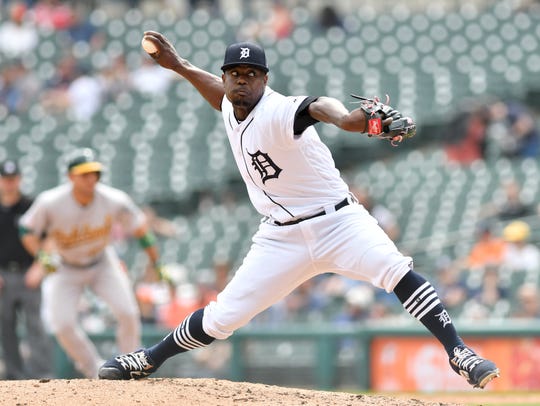 Alcántara made his major league debut in September 2017 and was 4-3 with a 4.28 ERA in 79 games over three seasons with the Tigers.

Hill, a 22-year-old right-hander, was a 10th-round draft pick last year and was 1-2 with a 6.05 ERA in 14 relief appearances for West Virginia of the Class A South Atlantic League. He is on the roster of Modesto of the Class A California League.

Shinn, 23, was a 34th-round pick last year and batted .242 with three homers and 20 RBIs in 46 games for the rookie-level Gulf Coast League Mets.