Hank, the eldest son of George Steinbrenner, died at home in Florida due to a long-standing health issue.

New York — Hank Steinbrenner, the oldest son of George Steinbrenner and one of the four siblings who own the controlling shares of the New York Yankees, died Tuesday at age 63.

The team said he died at home in Clearwater, Florida, due to a long-standing health issue.

A chain smoker and miniature drag racer, Hank hoped to succeed as father as the team’s controlling owner. Between the 2007 and 2008 seasons, he became the public voice of the Yankees’ ownership. 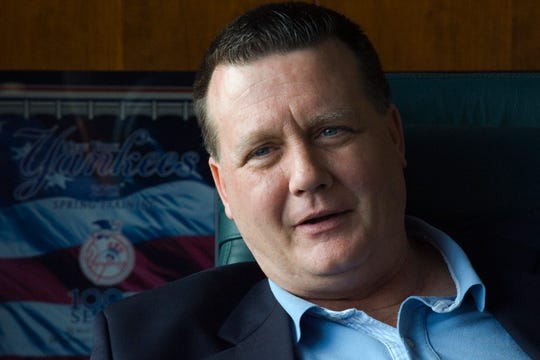 “We’re keepers of the flame, I guess,” he said then. “I don’t particularly necessarily enjoy it. It was kind of thrust upon me. At some point, if you’re going to be a leader, you’ve got to step up and you can’t hide in the office.”

But brother Hal, 11 years younger, was put in charge in November 2008. While Hank was in his 13th season as a general partner and 11th as co-chair, he did not appear to have much involvement in the team’s operations in recent years. Still, Hal said he consulted Hank and sisters Jessica and Jennifer on all major decisions.

A rock fan, Hank Steinbrenner kept a Fender Stratocaster guitar on the floor near the door of his office at the Yankees’ spring training ballpark.

“Hank to me was a Renaissance man,” Yankees president Randy Levine said. “You could have a conversation with Hank for 10, 15 minutes and you can go from baseball to history to rock ‘n’ roll to fine art. He held his own and was extraordinarily knowledgeable in all of those areas.”

Hank was the more boisterous of the brothers, prone to colorful statements in the manner of his father, while Hal describes himself as a “finance geek.”

“Hank was a genuine and gentle spirit who treasured the deep relationships he formed with those closest to him,” the Steinbrenner family said in a statement. “He was introduced to the Yankees organization at a very young age, and his love for sports and competition continued to burn brightly throughout his life.”

“Hank could be direct and outspoken, but in the very same conversation show great tenderness and lightheartedness. More than anything, he set an example for all of us in how comfortably he lived enjoying his personal passions and pursuits,” the team said.

Henry G. Steinbrenner was born April 2, 1957, in Cleveland and attended Culver Military Academy, like his father. He then went to Central Methodist College in Missouri.

He played soccer at Central Methodist and coached at Ocala Vanguard High. He was 15 when his father led a group that bought the Yankees from CBS in 1973. Hank traveled with the team for parts of the 1985 and 1986 seasons, learning under Lou Piniella, Woody Woodward and Clyde King, before getting out of baseball and concentrating on the Steinbrenner thoroughbred stable in Ocala, Florida. He was a vice president and director of Bay Farms Corp. since 1985 and a member of the board of the Ocala Breeders Sales Co.

Steinbrenner also served as chairman of Minch Transit Co. and vice president of Mid-Florida Hotels Corp. He coordinated a partnership with Gwynn Racing in 2000 to field a Gwynn/Steinbrenner Yankees dragster on the National Hot Rod Association tour and with son George Michael Steinbrenner IV formed Steinbrenner Racing in 2016.

He is survived by daughters Jacqueline and Julia, sons George Michael IV and John, granddaughter Anabel, and his three siblings.