The move was made after Major League Baseball decided not to provide any players to its affiliated teams amid the coronavirus pandemic.

Baseball’s minor leagues canceled their seasons Tuesday because of the coronavirus pandemic, and the head of their governing body said more than half of the 160 teams were in danger of failing without government assistance or private equity injections.

The National Association of Professional Baseball Leagues, the minor league governing body, made the long-expected announcement.

“We are a fans-in-the-stands business. We don’t have national TV revenues,” National Association president Pat O’Conner said during a digital news conference. “There was a conversation at one point: Well, can we play without fans? And that was one of the shortest conversations in the last six months. It just doesn’t make any sense.” 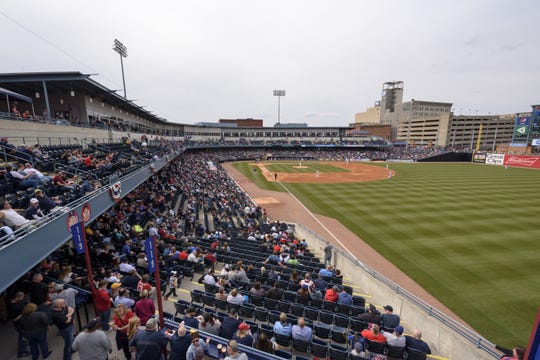 There will be no minor league games played at Fifth Third Field in Toledo this season. (Photo: David Guralnick, Detroit News)

MLB teams are planning for a 60-game regular season and most of their revenue will derive from broadcast money.

“I had a conversation with the commissioner, and we weren’t unable to find a path that allowed us to play games,” O’Conner said. “It wasn’t an acrimonious decision on our part.”

“That was a Band-Aid on a hemorrhaging industry,” he said. “Many of our clubs have gone through one, two, maybe three rounds of furloughs. In our office here, we’ve had varying levels of pay cuts between senior management, staff, and we’ve furloughed some individuals, as well, and are just about to enter in a second round of furloughs.”

He hopes for passage of H.R. 7023, which would provide $1 billion in 15-year federal loans from the Federal Reserve to businesses that had 2019 revenue of $35 million or less and “have contractual obligations for making lease, rent, or bond payments for publicly owned sports facilities, museums, and community theaters.”

In addition, the Professional Baseball Agreement between the majors and minors expires Sept. 30, and MLB has proposed reducing the minimum affiliates from 160 to 120.

“There’s no question that what the pandemic has done is made us somewhat weaker economically,” O’Conner said. “I don’t think it’s challenged our resolve. I don’t think it’s impacted our desire to stick together and get a good deal.”

There have not been substantive talks for about six weeks.

“There are very many teams that are not liquid, not solvent, not able to proceed under normal circumstances, and these are anything but normal circumstances given the PBA and the uncertainty of the future for some of these ballclubs,” O’Conner said. “So I think the coronavirus has really cut into many clubs’ ability to make it. And I think that we’re looking at without some government intervention, without doing something to take on equity partners, you might be looking at half of the 160 who are going to have serious problems.”

MLB already has told clubs to retain expanded 60-player pools, of which 30 players can be active during the first two weeks of the season starting in late July.

Conner said the financial impact of the pathogen might extend until 2023.

“As serious as the threat from Major League Baseball was,” O’Conner said, “this threat from the coronavirus, it transcends any list that anybody wants to make with respect to the possibility of teams not being around in the future.”

Rockies' Desmond to sit out

Rockies outfielder Ian Desmond plans to sit out this season to be with his family and help grow youth baseball in his hometown in Florida.

The 34-year-old Desmond wrote Monday night on Instagram that the “COVID-19 pandemic has made this baseball season one that is a risk I am not comfortable taking.” But the biracial slugger also mentioned a myriad of issues within baseball, including racism, sexism, homophobia and socioeconomic concerns.

“With a pregnant wife and four young children who have lots of questions about what’s going on in the world, home is where I need to be right now,” Desmond wrote on Instagram. “Home for my wife, Chelsey. Home to help. Home to guide. Home to answer my older three boys’ questions about Coronavirus and Civil Rights and life. Home to be their Dad.”

Shohei Ohtani will resume his two-way career with the L.A. Angels when baseball returns.

Ohtani was only a designated hitter last season after undergoing Tommy John surgery. He wasn’t expected to pitch in 2020 until at least May, and general manager Billy Eppler confirmed that the coronavirus pandemic hasn’t altered the Angels’ plans.

... Outfielder Heston Kjerstad agreed to a minor league contract with the Orioles that includes a $5.2 million signing bonus, well below the slot value of $7,789,900 assigned to the No. 2 overall pick.