Joe Nathan desperate to move past flap, and Tigers fans should let him

This response was acceptable. This apology was deeper and stronger than the last. This was the first step Joe Nathan had to take, to have a chance to take a few more.

Joe Nathan desperate to move past flap, and Tigers fans should let him 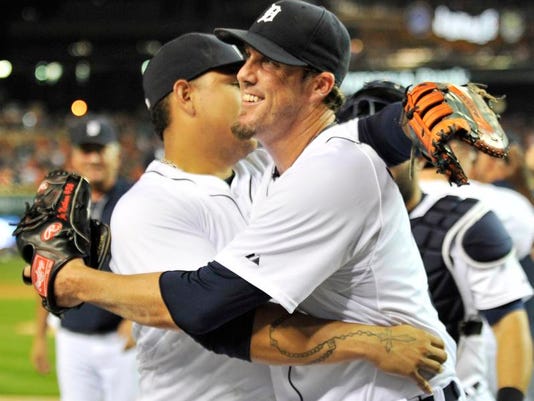 Detroit — This response was acceptable. This apology was deeper and stronger than the last. This was the first step Joe Nathan had to take, to have a chance to take a few more.

It wasn’t perfectly clean, but it was thoroughly necessary, and Nathan survived to battle on. The Tigers’ closer is 39 and has pitched in 14 major-league seasons, but he knew how big this moment was. Nathan surrendered a run but got the final three outs in the Tigers’ 4-2 victory over the Mariners on Saturday night, and while it isn’t closure for the closer, it should be closure for the controversy.

Nathan made it through and moved on, and so should the fans. They booed him again for his disrespectful chin flick, but there were cheers too, perhaps even 50-50, as if the two emotions were fighting for attention. Both reactions were justified in Nathan’s first appearance since the gesture, but from this point forward, it makes more sense to judge him on his performance, not his demeanor.

This outing didn’t end the angst about his ninth-inning role, but it should end the anger. David Price pitched an absolute gem in front of a huge crowd and the Tigers’ hitters bounced the great Felix Hernandez for a much-needed victory. When it ended, Miguel Cabrera gave Nathan a hearty hug, knowing it meant more.

“I knew my nerves would be a little extra,” Nathan said. “I’ve never been a part of any type of controversy, and I will not be a part of it again. This has definitely affected me the last couple of days, and I’m just glad to get the first one over.”

Nathan felt the wrath of Tigers fans since punctuating his outing Wednesday night with two hand gestures to his chin toward the crowd. Fans made their point again with boos when Nathan took the mound Saturday night, and again when he gave up a single to the first batter, Robinson Cano.

The message was received, and I believe Nathan’s remorse is real. He stood for another 15 minutes after the victory, profusely apologizing, hoping to close any rift.

“I felt terrible for my actions, I know that’s not me as a person, and I let frustrations get the better of me,” Nathan said. “I apologize for that and I continue to apologize for that. I know that may not be enough for some of the fans, but the one thing I want them to understand is how much I do care about getting better, and how much hard work I’ve put into getting better.”

For all his struggles, Nathan has held opponents scoreless in 13 of his past 16 outings. The messiness can be aggravating and the walks are damaging, and the trend isn’t good for an aging closer who has lost velocity. But until Joakim Soria returns from the disabled list, and unless Joba Chamberlain or newly signed Jim Johnson show they can handle it, the Tigers need Nathan.

And the truth is, no matter how experienced he is, Nathan knows he needs the support of teammates and fans. He had no problem admitting the negativity affected him. He also defended reliever Phil Coke, another object of scorn, as the Tigers continue to try to stem fans’ irritation.

Nobody is absolving the players of poor performance, and no one is telling fans what they can or should do. Nathan has to be better. Everyone in that bullpen has to be better. Nathan’s gesture wasn’t a violent or obscene act, but it bothered fans who saw the $10-million-per-year reliever costing their team, and flippantly dismissing their concerns. He knows how it looked, and he still appears crushed by it.

“I think sometimes maybe the fact I have worked so hard, and to hear some of the reactions right away on the first pitch — I throw a ball and boos come out — again, frustrations came out,” he said. “I did something I shouldn’t have. But I’ve been in pro ball a long time, and I just don’t want the three seconds of a mistake that I made to say who I am.”

Fair enough. The rest of this season won’t define Nathan’s outstanding career, but it’s a helluva test nevertheless. Manager Brad Ausmus wanted Nathan to face the test as soon as possible, and there was no hesitation putting him in after Price’s pitch count hit 110.

“It was good to get him back on the mound, in light of what’s gone on, and have him get through it, relatively unscathed,” Ausmus said. “At some point, he would have to pitch again in this ballpark. And in my mind, really, it’s better to do it sooner than later.”

It was a painful wait for Nathan, and a tense wait for the fans. It was a crazy night downtown, with a sellout crowd of 43,833 filling Comerica Park, and music fans packing Ford Field to see boy band One Direction.

After the turmoil, maybe, just maybe, Nathan and the fans can start heading in one direction, huh? When the bullpen door swung open, it sure seemed like plenty hung in the balance.

“I was definitely paying attention to what kind of emotions they were going to have,” Nathan said of the fans. “It was exactly what I expected. I don’t expect this to just go away. But I was glad to hear some cheers, so at least I think we’re on the right track.”

With Nathan and the bullpen, there’s no way to predict the next bend in the track. But this was the step he had to take, and the amends he had to make.