Squirrels will have to wait for newest Tigers fill-in, Kyle Ryan

He is from Florida, just down the road from the Tigers spring training complex in Lakeland, and the only thing he enjoys more than getting a hitter to softly slap his cutter or sinker to a waiting infielder is hunting.

Squirrels will have to wait for newest Tigers fill-in, Kyle Ryan 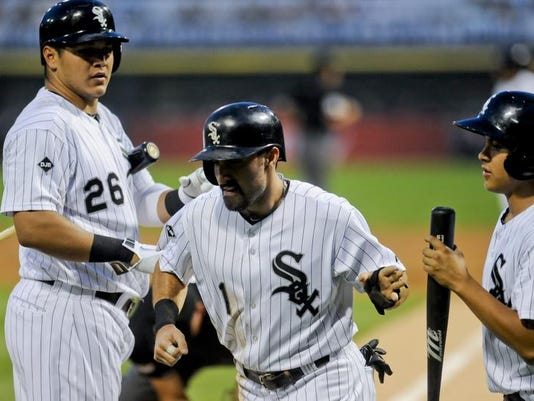 Adam Eaton scores for the White Sox on a sacrifice fly hit by Adam Dunn. The Tigers were up 7-1 in the fourth inning in Chicago.(Photo: Matt Marton, /Associated Press)

Chicago — Next on stage for his Tigers pitching audition is Kyle Ryan, a left-handed starter and a bit of a fine-brushstroke artist whose fastball won’t frighten big league batters.

He is from Florida, just down the road from the Tigers spring training complex in Lakeland, and the only thing he enjoys more than getting a hitter to softly slap his cutter or sinker to a waiting infielder is hunting. He hunts everything, he said Friday during a pre-game interview ahead of the Tigers-White Sox game at U.S. Cellular Field.

“Hogs, squirrels, gators, deer,” said Ryan, 23, who might or might not know that he today will become the 11th man in 2014 to start a game for a Detroit team that has all but held a tryout camp as it attempts to glue together a rotation with four weeks on the regular-season calendar.

“My objective is to get on and off the field as fast as I can,” said Ryan, who was 3-0, with a 1.64 ERA, in five starts at Triple A Toledo following a midseason promotion from Double A Erie.

That getting-on-and-off-the-field-rapidly mantra could be just the ticket today for Ryan and the Tigers. They are supposed to play a day-night doubleheader against the White Sox, a double-shift necessitated by an earlier rainout.

But rain is in the forecast for Chicago throughout the day and into the evening.

The Tigers not only need to play with zest to make the most of skies that might not be helpful, they need Ryan to avoid any calamities in his first big league start. The Tigers are likewise offering incense and chants and any pleasing sacrifice that petitions baseball’s gods for mercy as they try to get some meaty innings from him on yet another day when their bullpen will need all the breathers it can get.

“For finesse pitchers, it’s all about keeping the ball down,” said Brad Ausmus, the Tigers manager who has been trying to keep his ever-changing pitching staff from disintegrating due to schedule jam-ups and pitchers who are either injured or who have been getting mashed. “If he can (keep the ball down), he’ll be fine — similar to what Kyle Lobstein did for us yesterday.”

Ausmus was referring to another left-handed starter who had been shipped to Detroit from Toledo for emergency duty. Lobstein gave the Tigers six innings of quality work Thursday (one earned run, four hits) in Detroit’s 3-2 victory.

There has been a cavalcade of guest hosts as the Tigers have searched for starters in 2014. Buck Farmer had a couple of shots. Robbie Ray had his turns, and so did Drew VerHagen. It’s a long list for a team that a year ago got away with a single extra starter, Jose Alvarez, a left-hander who this spring was traded to the Angels in the deal that brought Andrew Romine to Detroit.

Ryan’s story is fairly concise, if you skip his hunting passion, which has included gator hunting on wild lakes south of Orlando, Florida, and an offseason job working as a deer-skinner at a processing plant.

He is from Auburndale, a community that borders Lakeland, and had a full scholarship offer to Florida Southern University until an uncle asked him why he wanted to go to college.

Ryan was candid. He wanted to play sports. A scholarship would allow it. When the Tigers made him their 11th-round draft pick in 2010 and offered $100,000, Ryan was happy to get busy with baseball, sans college classes.

He had decent numbers during his early years on the Tigers’ farmlands (3.46 ERA in his first four seasons) but nothing compared with those five starts for the Mud Hens.

Ryan credits nothing in particular for a breakthrough month. His fastball, he acknowledges, is more of a high 80-mph, low-90 fastball that works best when it sinks. He has a cutter that he likes to throw at a right-handed hitter’s hands. He wields a “slurve” as his primary breaking pitch, an obvious combination of slider and curve. And he has a change-up.

Whether it’s enough to handle the White Sox today, symbolized by their right-handed basher, Jose Abreu, is for Ryan to determine.

“It definitely is the real deal,” he said of his first big league assignment. “I try not to think about it too much. I’ll trust my catcher and my defense.”

He got the word this week, from Toledo manager Larry Parrish, who generally likes to deliver the news playfully when one of his players has gotten the call to Detroit and to the big leagues.

The minor league season ends this weekend and Ryan was scheduled to be in South Carolina next week — hunting, of course.

“I’ve got some terrible news,” Parrish said as he called in Ryan for a chat. “You’re gonna have to delay that hunting trip.”

That’s all it will be — a delay. Ryan will get busy with his offseason passion as quickly as he completes some in-season business. He hopes today’s start earns a couple more invitations, no matter how long the squirrels, deer, and gators must wait.