Scherzer will open series vs. Orioles

Scherzer will open series vs. Orioles 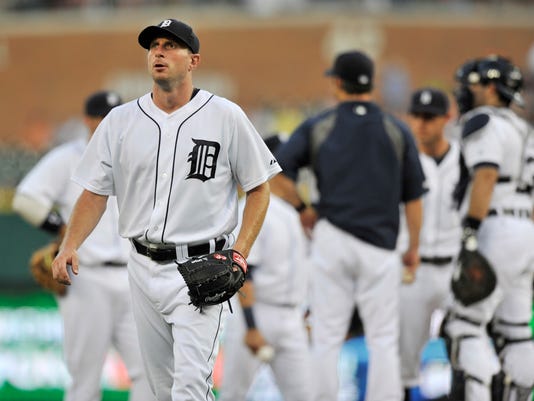 Tigers pitcher Max Scherzer will be on the mound in the playoff opener Thursday in Baltimore.(Photo: Robin Buckson / Detroit News)

Detroit — For Tigers manager Brad Ausmus, the decision to start Max Scherzer in Game 1 of the American League Division Series was relatively easy. Choosing his starter for Games 2 and 3 was much more difficult, and his decision on which bullpen pieces to put on the playoff roster is on hold because of the uncertainty with center fielder Rajai Davis' health.

"But Max has had the best year."

Tigers' manager Brad Ausmus talks about the playoffs before Tuesday's workout at Comerica Park in Detroit.

Verlander will pitch Game 2, David Price Game 3 and Rick Porcello Game 4. Ausmus considered pitching Price in Game 2. Ultimately, he decided that Price would benefit from the extra day of rest more than Verlander would.

"If we pitch Verlander in Game 3, now you've really stretched him out without him having pitched in a while."

As for the bullpen and the rest of the roster, Ausmus will wait to see how Davis responds after the team's workout in Baltimore on Wednesday. Davis has a strain in the pubic symphysis ligament.

"At this point Rajai says he feels better, but we're unsure how he's going to feel come Thursday," Ausmus said. "Until we know what his status is, our postseason roster, including the bullpen, will not be set."

Ausmus has until Thursday morning to submit the roster.

"If you have Raj, then you probably don't need to pinch hit as much and you might not need as many bench players (which would open up another bullpen spot)," Ausmus said. "If you don't have Raj, you might need an extra bench player and that would cut into your bullpen."

"He's only been getting treatment," Ausmus said. "Yesterday he said it felt better, but I could tell by his voice that it didn't feel as much better as he thought it would. Today he seemed a lot more optimistic."