Simon didn't pitch as well after the All-Star break as he did before it; he knows that.

Simon was 15-10 with a 3.44 earned run average for the Reds last season in 32 starts. He struck out 127 batters and walked 56. David Banks/Getty Images
Fullscreen

Simon celebrates the Reds winning the National League Central Division in 2012. He went 3-2 with a 2.66 ERA in 61 innings of relief work that season. John Grieshop/Getty Images
Fullscreen

Simon has had his share of off-field issues. Joe Robbins/Getty Images
Fullscreen

Simon was a 2014 National League All Star. Elsa/Getty Images
Fullscreen

Simon spent four seasons with the Orioles (2008-11). He was 4-9 with a 4.90 ERA in 2011 as a starter. The Reds selected him off waivers from the Orioles. Charles Sonnenblick/Getty Images
Fullscreen

Simon spent time in the Giants organization as well as the Rangers and Dodgers systems before signing with the Orioles as a free agent. Lisa Blumenfeld/Getty Images
Fullscreen

Simon signed with the Phillies as an amateur free agent in 1999. Al Bello/Getty Images
Fullscreen 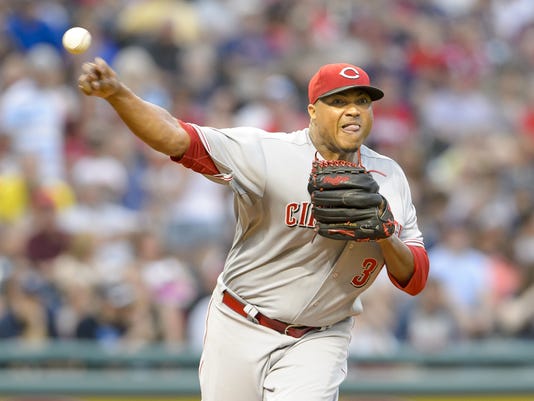 It was a tale of two halves last season for the pitcher Alfredo Simon, who was 12-3 wiht a 2.70 ERA before the All-Star break for the Reds, and was 3-7 with a 4.52 ERA after.(Photo: Jason Miller / Getty Images)

Detroit — Alfredo Simon didn't pitch as well after the All-Star break last season as he did before it; he knows that. But he didn't exactly fall off the grid, either.

"Nothing really went wrong," he said. "I didn't lose arm strength; that was no problem. My first half, everything went 100 percent right. The second half, I don't think I got support with the hitting."

But his point about support is well-founded.

The Reds lost 10 of his final 14 starts and in seven of those games he allowed three or fewer runs. Three were no-decisions, including a 1-0 loss to the Cubs. In five of those starts he got two runs of support or less.

So, did he pitch as well in the second half? No. Opposing hitters posted a .313 batting average against him on balls that were put into play in the final two months. His command wasn't as crisp. He had 75 strikeouts and 28 walks in his first 1162/32/3 innings. Over the next 792/3 innings he posted 23 fewer strikeouts with the same amount of walks, 28.

Yet, he still managed to win two of his final four starts, with the only loss being the 1-0 game against the Cubs.

"I surprised everybody because nobody thought I could do the things I did last year," he said.

The Tigers, who signed him to a one-year deal worth $5.55 million, are going to give him at least the 2015 season to prove it wasn't a fluke.

They acquired the 6-6, 265-pound Simon on Dec. 11 for Eugenio Suarez and Jonathon Crawford essentially to replace Rick Porcello, who on the same day was traded to Boston in a deal for outfielder Yoenis Cespedes.

"He has an above average arm with four pitches," Tigers president and general manager Dave Dombrowski said at the time the trade was made. "He was a guy that never quite got over that hump of being a really good pitcher. Last year, his performance matched his stuff."

"I throw five pitches for strikes," he said. "It took me a lot of time to learn those pitches, but I really got it now."

The last time American League hitters saw him on a regular basis, 2008-2011 with Baltimore, he mostly threw fastballs.

When he was at his best last season, he used an effective mix of two-seam sinkers (95 mph), split-finger pitches (85 mph) and cutters (89 mph). He also throws a four-seam fastball (95 mph) and a curve (78 mph). He threw exactly two change-ups last season.

"This year I am going to prove myself," he said. "I have been working hard to show everybody here in Detroit what I can do and help the team win some games."

Simon, who will turn 34 on May 8, has heard all the talk about how the Tigers' starting rotation has taken a step back with the losses of Max Scherzer and Porcello. On one hand, he said, he's motivated by that talk. On the other, he's not trying to put too much on his own plate.

"It's just, I am here to do my own job," he said. "To play here, I am excited. I want to show the fans that I am here and I can be a starter and be a quality guy here. Probably they don't know me a lot. My goal is just to go out and win some games. That is my focus.

"If I go out and give 100 percent every time out, everything is going to be OK."