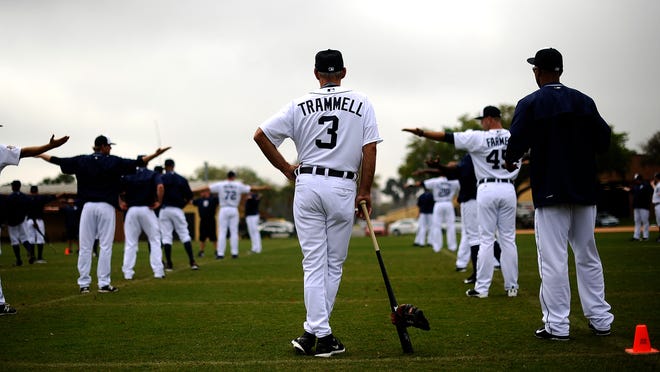 Lakeland, Fla. — It was probably not the way Alex Wilson and Josh Zeid wanted to start their morning, getting the news that the Tigers had re-signed Joba Chamberlain.

Those two, both right-handed relievers, were already facing long odds to make the Tigers' 25-man roster out of spring training. And with Chamberlain, an established right-hander, back in the fold, their odds got longer.

"It's baseball," said Wilson, acquired from Boston along with Yoenis Cespedes in the Rick Porcello trade Dec. 11. "It happens every year. It doesn't matter who you are competing against, you still have to do your job. I just look at it that way. I still have to go out and pitch well and see where everything lies at the end of spring."

Zeid, whom the Tigers signed after he was designated for assignment by Houston, has been through this a few times before himself, being shuttled between Triple-A Oklahoma City and Houston the last two years.

"I didn't come into spring training expecting to have a spot given to me," he said. "I knew I was going to have to earn it. I've had to pitch the last six or seven years fighting for a job. Nothing changes.

"Like I said, my goal is to help the Tigers this season; whether it happens April 5, May 5 or June 5."

Although manager Brad Ausmus has encouraged all pitchers in camp to continue to compete as though there were spots open, players understand the revolving door that bullpens can become over the course of a full season.

The Tigers in 2014 used 28 different pitchers (not counting position players Danny Worth and Andrew Romine, who saw mound duty), 17 of those were relievers.

"Very rarely do you see seven (bullpen) guys stay the whole year," Wilson said. "You know if things don't work out in the spring, you could be called up three or four days later. I made my Major League debut on April 9 after not making the club in spring.

"Just keep your head down, keep pushing and see where it all lays out at the end."

Wilson said the worst thing he could do was allow himself to feel additional urgency or pressure. He said his mindset remained unchanged by the presence of Chamberlain — just control the things he can control.

"You are in the mix, you know where you stand," he said. "They just threw another wrench at you. It's baseball. Everybody expects news to be made. Whether the timing is bad or good, we are all here to win. That's the goal."

If good attitudes ever become tie-breakers, both Zeid and Wilson are in good shape.

"I come to the park every day and try to get better," Zeid said. "This (the news about Chamberlain) is absolutely difficult, but it's an honor to be here. I got designated (for assignment), I am blessed to have a job. I have a family to support and that's what I am here trying to do."