Iglesias keeps it light on spikes early in camp

Shortstop works out in tennis shoes after returning from stress fractures

Iglesias keeps it light on spikes early in camp 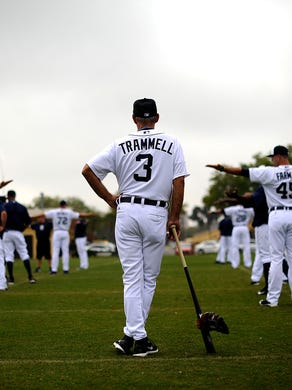 Tigers players high-five fans as they make their way to the field. Elizabeth Conley/Detroit News
Fullscreen

Tigers' Yoenis Cespedes shakes hands with fans as he makes his way to the field for the first full squad workout. Elizabeth Conley/Detroit News
Fullscreen

Tigers' Justin Verlander shakes hands with fans as he makes his way to the field for the first full squad workout. Elizabeth Conley/Detroit News
Fullscreen

Fans line up along the practice field fence get watch the Tigers do drills during Tuesday's practice. Elizabeth Conley/Detroit News
Fullscreen

Shortstop Jose Iglesias worked out in tennis shoes and then switched to spikes when hitting.(Photo: Elizabeth Conley / Detroit News)

Lakeland, Fla. – There are going to be a lot of eyes on shortstop Jose Iglesias this spring. Not only because everything he does, even the most mundane drill, he performs with an unrelenting, joyous flair, but also because he missed all of last season with stress fractures both legs.

Tuesday was the Tigers first official, full-squad workout. Iglesias was in a group with Ian Kinsler and Nick Castellanos, fielding ground balls and taking swings. What was conspicuous, though, was that he wore tennis shoes when he was in the field and only put on cleats to hit.

There is a method to that.

"I can use whatever I want," he said. "It's just I want to start with tennis shoes because it's less impact. I just put on the spikes when I do more activities."

The Tigers want him to ease into things this spring. Manager Brad Ausmus has mentioned on several occasions that he's not at all sure the leg issues are completely in Iglesias's rear-view.

"It's very encouraging to see him out here, but there are a number of hurdles that need to be crossed before I will feel really good about Iglesias's situation," he said. "The biggest of which is being sure his legs can withstand the pounding of daily baseball activity."

Whether he wears tennis shoes, turf shoes or cleats is up to Iglesias. He is not on any kind of team-supervised program. He said he has yet to wear cleats while doing fielding work but expects he will once the drills get more intense.

"There's not as much impact (on his legs) with the tennis shoes; it's just what I feel more comfortable with," Iglesias said. "With the spikes, it depends on what I am doing. It's a different impact with spikes, so I try to stay out of them as much as I can. But when I do some activities, I don't want to slip or anything like that, and get hurt. That's when I wear spikes."

Maybe not the first couple of weeks, maybe not until later in March, but eventually, Iglesias is going to have to remove all the restrictions and fully test his legs.

"We want to ease him in now," Ausmus said. "We don't want him on the field too much. We might even DH him in some games so he can get extra at-bats and avoid the pounding in the field. But as we get deeper into the spring, he's going to have to ratchet that up to make sure he can play.

"He has to monitor that himself. He has to be honest with (head athletic trainer) Kevin Rand and with me."