Pitcher David Price makes his way to the field at the beginning of practice. Cliff McBride, Special to Detroit News
Fullscreen

Joba Chamberlain comes onto the field at the beginning of practice. Cliff McBride, Special to Detroit News
Fullscreen

Players gather to talk in the thick morning fog at the start of a workout. Cliff McBride, Special to Detroit News
Fullscreen

A young fan gets a lift to watch the action. Cliff McBride, Special to Detroit News
Fullscreen 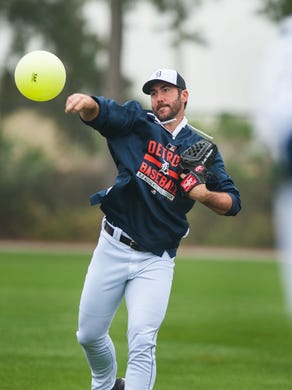 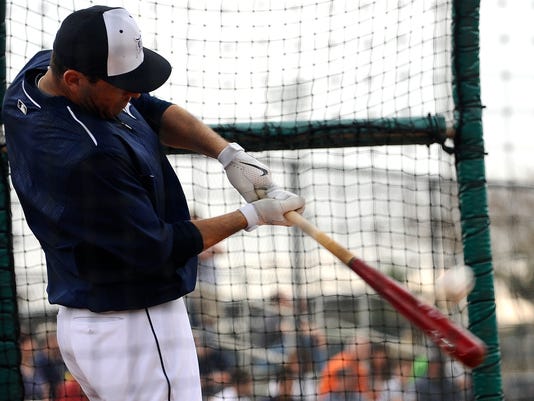 Lakeland, Fla. – Ian Kinsler was in the cage Tuesday, taking a round of situational batting practice against the pitching machine when manager Brad Ausmus gave him a seemingly odd bit of instruction.

"He told me to take a round and work on hitting every ball to second base," Kinsler said early Wednesday morning.

Normally there's not much money to be made in the big leagues hitting balls to second base, but in Kinsler's case, this was prudent instruction.

Thus, defenses are shifting accordingly, more and more playing the second baseman behind the bag at second and pushing the shortstop and third baseman closer to the left field line.

"Let me preface this by saying for a second baseman, his numbers were pretty darn good last year," Ausmus said. "But he knows he's at his best when he uses the whole field. There are a number of teams who shift that second baseman up the middle; I think he could take advantage of that."

Intellectually, Kinsler understands the rationale — hit the ball to all fields, make defenses play honest, have more undefended space to hit at, more balls find holes. But it isn't that simple, not when you have carved out a successful, four-time All-Star career with essentially the same hitting approach.

"Absolutely, I would like to neutralize those shifts," he said. "I'd like to force the other team to make the move back (to a traditional defensive alignment). That's something I definitely want to think about.

One of Kinsler's mentors in this regard is Victor Martinez. He is mostly a pull hitter from the left side, but he has confounded many defenses with his ability to beat shifts.

"When Victor gets in trouble, when he's hitting left handed and they move those guys over, there's times he beats it," Kinsler said. "You'd like to be able to use that to your advantage. But it's easier said than done."

Indeed it is. Not only are the shifting defenses taking space away, pitchers are also trying to locate pitches in areas that force you to pull the ball. They aren't leaving a lot of balls out over the plate for Kinsler to poke into right field.

But the mental hurdle is harder to clear, especially for a hitter as accomplished as Kinsler.

"It's kind of like if you are playing a round of golf and you are hitting your driver really well," Kinsler said. "Then you get to a hole where you are supposed to hit a long iron off the tee. It's hard to pull that long iron out because if you miss with that iron you are going to be mad at yourself. You've been striping your driver all day.

"It's tough to move away from your strengths because you know that's your best chance to do something positive. If I am trying to flip a ball into right field and I end up rolling over or hitting a weak fly ball — I'm kicking myself."

That said, Kinsler works every day on hitting pitches to right field. And the fact the Ausmus is right there with friendly reminders doesn't hurt.

"Just putting the thought into my head," Kinsler said. "That he's aware of it make you aware of it. I know it and I do practice is every day to use it as maybe an escape (when he is behind in the count) or just use it to my advantage."

Kinsler most likely will bat leadoff against right-handed pitchers and possibly second against lefties, Ausmus said, which puts some onus on him to get on base more often.

"Kins also mentioned to me that he thinks it's important, especially with the addition of Yoenis Cespedes, that he is on base to be driven in," Ausmus said. "He said he should walk more."

Kinsler, on top of the 92 runs he knocked in, scored 100 himself. So his point is well-taken.

"Bottom line is, you can't score unless you get on base," he said. "So I just want to get on base as much as possible."