White Sox bemoan not having slow-motion replay of controversial tag

White Sox bemoan not having slow-motion replay of controversial tag 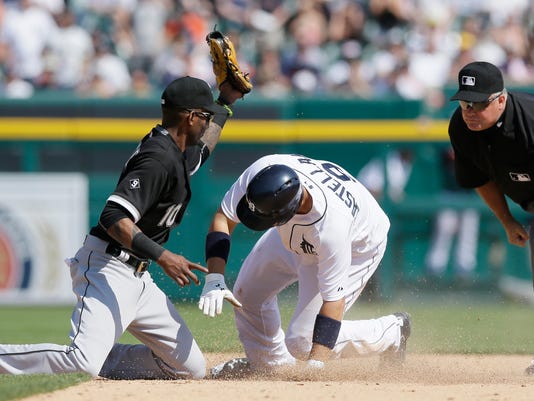 Nick Castellanos is ruled safe on this play Friday. Had it been reviewed, Castellanos likely would have been called out.(Photo: Carlos Osorio / Associated Press)

Detroit – Yesterday, after White Sox manager Robin Ventura opted not to challenge the missed tag call at second base on Nick Castellanos – a failure to act that ultimately allowed the winning run to score in a 2-1 game – it was the Chicago video coordinator that took the brunt of the blame.

On Saturday, the blame was shifted onto the technological inadequacies of the Chicago television crew.

"I think we all missed it," Ventura said Saturday. "You move on. Everybody with 20-20 hindsight, you'd like to change it, but we left that one out there."

Ken Harrelson and Steve Stone, the White Sox broadcast team, said their feed did not get the super slow motion shot that clearly showed shortstop Alexi Ramirez tagging Castellanos. The Fox Sports Detroit crew showed that replay repeatedly during the ninth inning and it conclusively showed the tag was applied.

Clearly, though, that message got to Ventura too late. Umpiring crew chief Jeff Kellogg denied Ventura's late request for a replay review.

"Do you know what happened with the cameras?" Stone said. "Detroit has the technology in their truck to slow it down. Our truck does not have that technology. Even though we had the same angle as Detroit did, when they slowed it down and it showed the tag on the guy's foot before he went up and all we showed was the miss on it."

"We got to the point where you get the feed and it's what you see," Ventura said. "Later on there's a different feed. At that point and you've already kind of made your (mind) — if you're standing out there and go back in — there's a time limit at that point."

"There's a lot of things that you could have done," he said. "We didn't do it so now you've got to put that behind you and play today. You can't sit around worrying about yesterday. You play for today.

"It's better for these guys to focus on today and try and win a game today rather than sit there rehash either not getting a hit or doing anything yesterday. They're good. They put some pressure on themselves to do it. I believe these guys are going to come out of it and play well."