David Price was rocked by the Yankees, and the Tigers were shut out after the fourth inning.

A flyover of helicopters make their way over Comerica Park as part of the opening ceremony. Elizabeth Conle/Detroit News
Fullscreen

Tigers' David Price (14) throws out the first pitch to the Yankees on Wednesday, April 22, 2015 at Comerica Park in Detroit. Elizabeth Conley/Detroit News
Fullscreen

Yankees' Jacoby Ellsbury (22) hits the ground after getting hit in the chest by a pitch from Tigers' David Price (14) in the first inning with no outs. Elizabeth Conley/Detroit News
Fullscreen

Tigers' starting pitcher David Price (14) gets ready to pitch in the first inning as the snow starts to fall. Elizabeth Conley/Detroit News
Fullscreen

Yankees pitcher Adam Warren (43) pitches in the bottom of the fifth inning. Warren was the winning pitcher in the game throwing 101 pitches with 59 strikes. Elizabeth Conley/Detroit News
Fullscreen 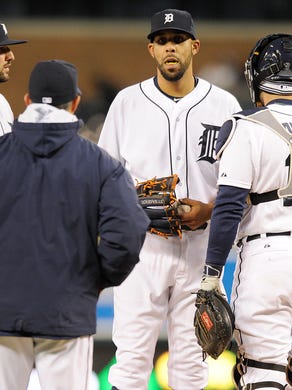 Tigers pitcher Angel Nesbitt (60) gets Yankees' Gregorio Petit (31) out at first for a sacrifice bunt in the third inning. Elizabeth Conley/Detroit News
Fullscreen

Yankees' Chase Headley (12) is congratulated after scoring off of a double by Didi Gregorius (18) in the fourth inning, making the score 10-4. Elizabeth Conley/Detroit News
Fullscreen

A baseball fan reacts to getting a foul ball in the fifth inning. Elizabeth Conley/Detroit News
Fullscreen

Tigers' Hernan Perez (26) gets Yankees' Garrett Jones (33) fly out for the first out for the Yankees in the ninth inning. Elizabeth Conley/Detroit News
Fullscreen

Tigers hitting coach Wally Joyner talks with Rajai Davis (20) in the dugout before Davis went up to bat in the eighth inning. Elizabeth Conley/Detroit News
Fullscreen

Detroit — As cold as it was, and wet, and as badly as David Price got roughed up by the Yankees Wednesday night, you would have expected him to watch the rest of the game from the warmth of the Tigers clubhouse.

No sir. Price stayed in the dugout right to the last pitch, three hours and thirty five minutes worth, of the Tigers 13-4 loss.

"When you throw the ball as bad as I did, give up more runs than outs, you don't deserve to come in," said Price, whose personal nightmare against the Yankees continues.

The last time he faced the Yankees at Comerica Park, Aug. 27, 2014, he gave up nine straight hits and eight runs without retiring a batter in the third inning. In the first inning Wednesday, he allowed six runs and five hits.

Combine those and in one inning Price allowed 14 runs and 14 hits to the Yankees.

"I just didn't have it," he said. "It was a bad start. Not my worst, but whenever you put your team down six runs in the first inning before you even get a chance to swing it, it's tough. We did a great job coming back in the bottom of the first and putting up four runs, then I go back out and give them two more with two outs.

There were mitigating circumstances, though Price wasn't offering or accepting excuses. It was 38 degrees and snowing when the game started Wednesday night. Baseball was not designed to be played in those conditions.

"I don't think he was able to and that affected him."

He hit the first batter he faced, Jacoby Ellsbury, in the chest.

"It felt like a frozen snowball or something going at 93," Ellsbury said. "Hit me right in the heart."

Price then gave up a bloop single to Chris Young, and after striking out Alex Rodriguez, he walked Mark Teixeira to load the bases. It was clear Price was out of sorts.

Singles by Brian McCann and Chase Headley, were followed by a three-run triple by Gregorio Petit (who came into the game hitting a lusty .111).

It didn't get much better in the second. After getting the first two out, he allowed a single to McCann (who is 9 for 16 against him in his career) and back to back triples to Carlos Beltran and Headley.

He allowed a pair of singles with one out in the third and was mercifully pulled from the game. The grim totals – 2.1 innings, 10 hits, 8 runs, three walks and a hit batsman. In his last two starts against the Yankees at Comerica — 4.1 innings, 22 hits, 16 runs.

What do the Yankees know other teams don't?

"Uh, we're not going to tell the rest of the league," Ellsbury said. "No. He's a great pitcher. It's just one of those things, for whatever reason, we've put together good at-bats, strung together consistent at-bats throughout the lineup to allow us to score runs."

Price said the Yankees didn't present any unique difficulties for him.

"The last two times I just didn't throw the ball the way I need to," he said.

Excuse or not, it was a miserable night to play baseball.

The first inning alone took 51 minutes. Neither starting pitcher could get a feel for the baseball or the strike zone. As a result, 87 pitches were thrown, 10 runs were scored, there were seven hits, six walks and one hit batsman.

Warren, staked to a six-run lead, walked four in the first and all four scored.

"That's was definitely the coldest I've ever played in," J.D. Martinez said. "I know I've never played in snow before."