This was not the best week for making historical comparisons of present and past Tigers lineups.

Detroit Tigers' starting pitcher Shane Greene pitches in the first inning against the Cleveland Indians during the first game in a three-game series at Comerica Park in Detroit on Friday, April 24, 2015. Elizabeth Conley/Detroit News
Fullscreen 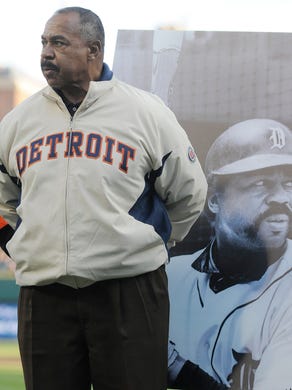 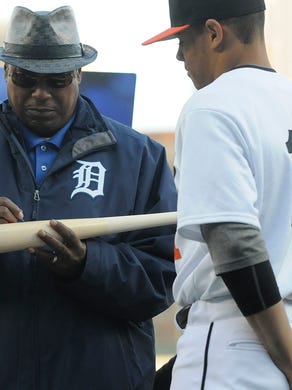 J.D. Martinez went 1-for-4 with a strikeout -- one of 13 registered against Tigers batters. Elizabeth Conley/Detroit News
Fullscreen

Tigers' Ian Kinsler (3) advances to third off of a single by Tigers' Miguel Cabrera (24) in the first inning. Elizabeth Conley/Detroit News
Fullscreen 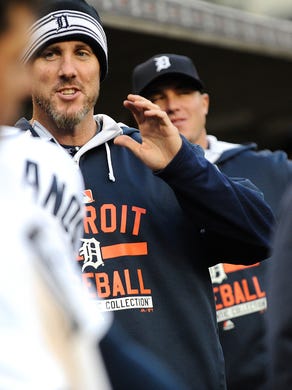 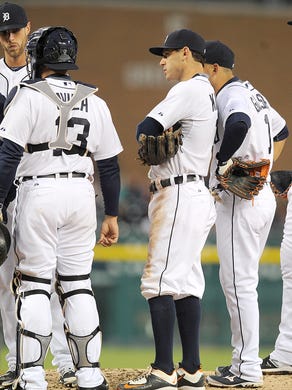 Meeting at the mound with the bases loaded and no outs for the Indians in the top of the fifth inning. Elizabeth Conley/ Detroit News
Fullscreen

Tigers' Jose Iglesias (3) reacts to swinging a strike in the bottom of the sixth inning. Elizabeth Conley/ Detroit News
Fullscreen

Tigers' pitcher Al Alburquerque stands on the mound as Indian's Brandon Moss works the bases after hitting a 2-run home run in the top of the ninth inning making the score 13-1. Elizabeth Conley/ Detroit News
Fullscreen

Tigers' Jose Iglesias (1) reacts after being hit by a foul ball in the bottom of the ninth inning. Elizabeth Conley/ Detroit News
Fullscreen

Victor Martinez has been on the DL since May 19 with knee inflammation. Elizabeth Conley/ Detroit News
Fullscreen

Designated hitter Victor Martinez, who adds a great deal to the potency of the Tigers lineup, is hit by a pitch from Danny Salazar in the first inning against the Indians at Comerica Park.(Photo: Elizabeth Conley)

Detroit — This was not the best week for making historical comparisons of present and past Tigers lineups.

It's difficult to hit when it is snowing and 36 degrees. The Tigers obviously didn't disagree during a Yankees series that saw them lose three games and look as if they had ditched their bats for Popsicle sticks.

But it has been tempting this spring, as a faster, deeper Tigers batting order took shape, to wonder how it might stack up against some past Detroit lineups, especially in years when Motown's team won, or played in, a World Series.

The short answer is this:

The 2015 Tigers are better, perhaps a lot better, overall than the '68 world champions, even if you remove from this analysis the designated hitter, which baseball didn't have in 1968.

They have a great chance at finishing ahead of the 2006 Tigers, who lost to the Cardinals in the World Series and who put up numbers that aren't always appreciated even from a team that played only nine years ago.

They will not easily beat the 1984 Tigers, although there is a speed component to this year's team the '84 championship club never had.

This dip into Detroit's baseball archives seemed appropriate as the Tigers began the year banging hits and scoring bushels of runs. They certainly impressed CC Sabathia, the Yankees star who has seen his share of big hitters. Sabathia said this week of their lineup: "That should be illegal."

The Tigers of 2015 have gotten a lift fundamentally because of health. Miguel Caberera is fine. Jose Iglesias, after a year layoff, is reminding everyone of his two-way talent. Victor Martinez, although not quite 100 percent as his left knee recovers from February surgery, is functioning.

This year's order makes a case for being one of the top Tigers offenses in the past 50 years because of one great quality: overall balance.

The top of manager Brad Ausmus' lineup is not All-Star-good, but it's generally effective. The middle is dynamite. And the bottom third is why there can be reasonable debate about the 2015's historical potential.

The Tigers this year have a more even infield offense than they had even in 1984. They have a solid outfield that can go four-deep. They are hanging in at catcher, and, of course, they have Victor Martinez as their DH.

Here's how they might size up compared with some of those past teams:

2006: The difference is Cabrera at first base. The '06 Tigers didn't have him. And if they had, St. Louis wouldn't have been winning the World Series in five games.

The Tigers of '06 also got 55 home runs total from their No. 8 and No. 9 hitters, Craig Monroe and Brandon Inge.

But you can see the potential for this year's group, in part because of speed, to eclipse those 822 runs by the 2006 team.

1984: The Tigers won't match Alan Trammell or Lou Whitaker's firepower at shortstop and second base, nor will they easily do what center fielder Chet Lemon contributed in '84, which was impressive to the tune of an .852 OPS.

Lance Parrish, who was the team's All-Star catcher, bashed 33 homers in '84, but hit only .237 with a .730 OPS. So the numbers aren't as overwhelming as some might suspect.

As for benches, no comparison, and this is why the '84 team, which scored 829 runs, is almost impossible for the 2015 gang to approach. Ruppert Jones and Johnny Grubb checked in with OPS of .862 and .827.

As for that magical '68 club, any analysis has to be viewed in the context of an older baseball era. There was no DH. There was a hill-high pitcher's mound. No wonder the top two Tigers batting averages that season were by Al Kaline (.287) and Willie Horton (.285).

Baseball life was so different then that two regulars rolled up these numbers: Ray Oyler, shortstop: .135 batting average and .399 OPS. Don Wert, third base: .200 and .556.

Of course, that also was the year Carl Yastrzemski won the American League batting title with a mighty average of .301. It is why the mound was lowered in 1969 and why, four years after that, the DH came to at least one league.

But even after a frigid week when Detroit's 2015 bats didn't spur thoughts of a championship, an offense's long-term potential is clear. There will be nights and days when it disappears, mostly because pitching in 2015 is so much better than in previous years.

There will be other games and weeks when a lineup is firing and people will wonder how this bunch ranks against some of Detroit's previous best.