Miguel Cabrera worked the count to 3-2 off left-hander Tyler Lyons and then, crack -- history. 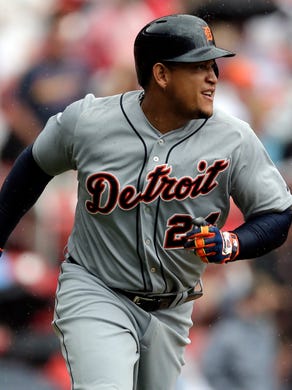 Detroit Tigers' Miguel Cabrera rounds the bases after hitting a solo home run during the first inning of a baseball game against the St. Louis Cardinals, Saturday, May 16, 2015, in St. Louis. Jeff Roberson/Associated Press
Fullscreen

Members of the Busch Stadium grounds crew pull a tarp over the field at the start of a rain delay during the first inning. Jeff Roberson/Associated Press
Fullscreen

St. Louis Cardinals' Matt Holliday, bottom, is tagged out by Detroit Tigers shortstop Jose Iglesias while trying to stretch a single into a double during the 10th inning. Jeff Roberson/Associated Press
Fullscreen

Yoenis Cespedes and Rajai Davis of the Tigers celebrate after beating the the Cardinals in ten innings. Dilip Vishwanat/Getty Images
Fullscreen 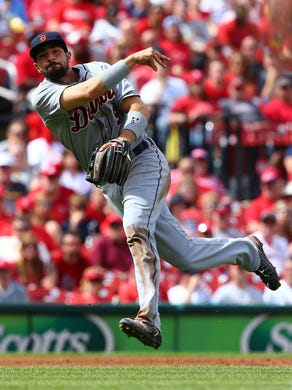 Nick Castellanos of the Tigers throws a runner out at first base against the Cardinals in the third inning. Dilip Vishwanat/Getty Images
Fullscreen 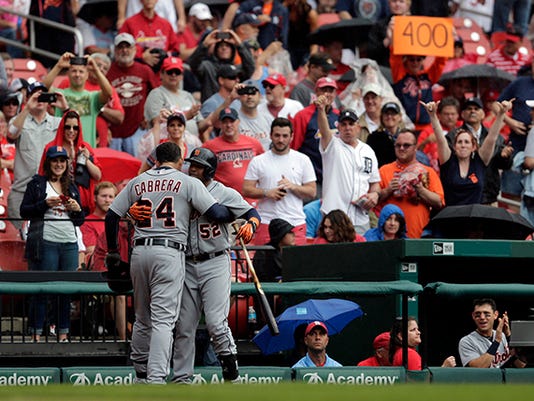 Miguel Cabrera gets a hug from teammate Yoenis Cespedes after hitting a solo home run during the first inning for No. 400 Saturday.(Photo: Jeff Roberson, AP)

St. Louis — You know that famous scene in the 2003 World Series when Yankees pitcher Roger Clemens threw a ball near 20-year-old Miguel Cabrera's head and Cabrera responded by hitting a monster home run to right field on the next pitch?

Victor Martinez witnessed the prequel to that scene. It was in winter ball in Venezuela when Cabrera was 17.

"The pitcher said he was going to throw one at Miggy's head and then throw something off-speed down and away," Martinez said. "Then Miggy takes him deep. That's when we said, 'Wow, this guy is something.' He was never afraid of anybody, not even at 17."

Flash ahead to Saturday. First inning against Cardinals left-hander Tyler Lyons. Rain is falling. The count is 3-2 and, crack – 32-year-old Cabrera makes history. He hit a screamer to dead center field that landed some 428 feet onto the berm, and became the 53rd player in major league history to hit 400 home runs.

Cabrera, who has now hit four home runs in three games, is the 15th player to reach the 400-homer club in his age-32 season. He is also, oddly enough, just the second player to hit his 400th homer as a member of the Tigers. Darrell Evans was the other.

The home run also made him the all-time home run king among Venezuelan-born players.

"It's huge in Venezuela," Martinez said. "They guy he just passed, I mean, great hitter. You talk about Andres Galarraga, he was everybody's idol — still. Great career. For Miggy to pass him, it's crazy."

The home run ball was retrieved by Busch Stadium security personnel. Cabrera, though, didn't have it in his possession immediately after the game.

"Watching Miggy in a three-game or a four-game series, I know the difference in watching what he does all year long," Martinez said. "As a hitter, he can be frustrating (watching so much greatness). That's how good he is.

"With all respect due for all the players in the league, he's got to be the best player in the game, by far."

Cabrera was mobbed in the dugout by his teammates, but it was a brief celebration.

"It was exciting but they know we have a game to play," Cabrera said after the Tigers beat the Cardinals 4-3 in 10 innings. "It was a good game and I am glad we won."

Tigers starting pitcher David Price was among the first to greet him in the dugout.

Cabrera showed his smarts with a highlight-reel defensive play in the eighth inning. With the score tied, the Cardinals' Pete Kozma was on first, running for Jhonny Peralta who led off with a walk.

Mark Reynolds hit a foul ball near the stands down the right-field line. Cabrera made a good running catch then turned and, without hesitation, threw a strike to third base to nab Kozma who had tagged up.

"That was the biggest play of the game," manager Brad Ausmus said. "It's awareness of what is going on. Miggy has a high baseball IQ. He is aware of what is happening around him. He was aware the guy might be tagging and he just assumed he was going. He came up throwing."

Cabrera's home run was his 262nd as a Tiger, which ties him for fourth with Willie Horton. Next on the Tigers' list for Cabrera to catch is Hank Greenberg, who hit 306 homers.

"He still has a long career to go," Martinez said. "I just pray that God can give him a lot of health. The rest is going to be history."