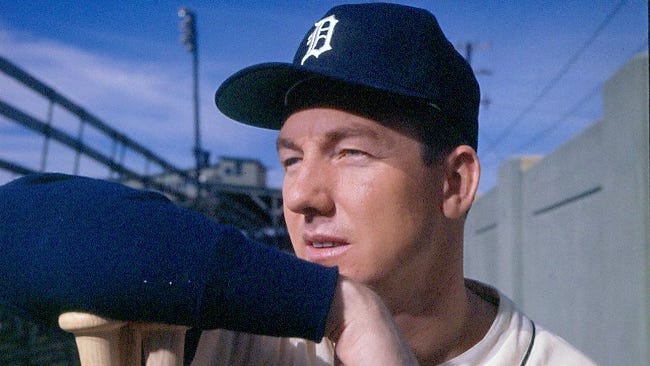 Detroit — Imagine it's 2015 and Al Kaline is about to play the last big league game in a Hall of Fame career.

His life and numbers would have been analyzed by all of Silicon Valley's technology and firepower. ESPN would have categorical breakdowns and comparisons crawling across TV screens and busting from its website.

Baseball Prospectus, FanGraphs, explorations by historical baseball numbers crunchers Jay Jaffe and Dan Szymborski — Kaline's career would have been cracked open and sifted for every statistical shard of meaning and value.

There is no chance Kaline and baseball's world would be unaware that, with one more home run, a Tigers superstar could become the first American League player with 3,000 hits and 400 home runs, as was the case in 1974, when Kaline retired.

There is even less chance the Tigers outfielder would leave his final game after the third inning and two at-bats. There is no way Kaline would, or could, excuse himself from posterity. From being the first Tigers player to hit 400 home runs, an honor secured last weekend in St. Louis when Miguel Cabrera hit No. 400 against the Cardinals.

But history was brushed aside that last day he played in the big leagues, Oct. 2, 1974, at Tiger Stadium.

"It was my fault," Kaline said, sitting on a black leather sofa in the Tigers clubhouse as Detroit got ready for a night game against Milwaukee. "It was one of the worst, if not the worst, decisions I've ever made in my life.

"Sometimes when you make bad decisions you don't realize how it might hurt other people."

He was speaking of two parties — three, if you care to count Kaline.

First of all, fans. Many had turned out that day to see Kaline for the final time put on his soon-to-be-retired No. 6 jersey.

He also realized too late the player who replaced him that cold autumn Wednesday afternoon, Ben Oglivie, would be booed by plenty of the final-day customers when Oglivie came to bat in the fifth.

"I really felt bad for Ben," Kaline recalled, shaking his head at a decision made impulsively, almost angrily.

It cost him at least two at-bats and two shots at that 400-homer plateau no American League player with 3,000 hits would reach until Red Sox star Carl Yastrzemski did it in 1979.

"Back in those days, statistics weren't as important," Kaline said, trying to explain the inexplicable. "You didn't have ESPN. And I didn't realize 400 homers would be quite such a milestone.

"And, really, statistics are a great conversation piece, but I've never been a stats guy. Eras in baseball are all different. The game changes so much. I knew how many great hitters had hit 400 or 500 home runs, and to me it wasn't like I was in their class."

The game Kaline wishes he could have back unfolded in low-key fashion, minus any majesty, despite the knowledge this would be his last rodeo. The Tigers were about to finish with a 72-90 record and in sixth place in what then was a 12-team, two-division American League.

The first-place Orioles were in town. Starting for them was left-hander Mike Cuellar, who in 1969 had been a co-Cy Young Award winner alongside Tigers ace Denny McLain.

In the first inning, Kaline, batting third, struck out looking. Not a big deal. He still had three at-bats, minimally, on the season's final day, 10 weeks before he would turn 40.

Third inning. The Tigers were leading, 2-0 after Ron LeFlore, who scored the first run, smacked a sacrifice fly that drove home Aurelio Rodriguez from third. Eddie Brinkman, who singled, was on second base, while John Knox was at first after Knox bunted for a single.

Cuellar was in trouble. Kaline was about to add to it — until his line drive to left was hauled in by Al Bumbry.

Kaline was irked. It was cold, he just hit the ball on the screws and made an out, and as far as he was concerned it had been a career.

And he was gone from baseball after 22 seasons as one of the game's elite two-way players. All his professional life had been spent with the Tigers at a time when free agency was still a landmark court decision and a couple of years of legal evolution from being part of baseball's mainstream.

Kaline, who has worked for the past 12 years as an assistant to Tigers front-office chief Dave Dombrowski, is no more bothered by the money he forfeited ahead of free agency than he is at missing a seat in that 3,000/400 penthouse.

He genuinely believes the power-hitters' elevation belongs more to Hank Aaron, to Ted Williams, to Mickey Mantle — as it eventually would for Cabrera — than it ever did to a 6-foot-1, 180-pound kid from Baltimore.

"I don't want people to think I'm trying to be modest," he said, speaking specifically of Cabrera, "but I'm not in his category. He is the best hitter I've ever seen in a Tigers uniform.

"My journey, to me, was unbelievable. I loved it. All the time during those years in Baltimore, living in that row house, all I ever wanted to be was just a baseball player. Later on, something like 400 homers wasn't that big of a deal."

In fact, it never should have been an issue. Kaline had 400 homers-plus in the bag. At least he did until stuff happened, physical and atmospheric.

He lost two home runs to games that were washed out before they had a chance to become official. One vanished June 1, 1958, when he homered in the second inning against the White Sox at then-Briggs Stadium, only to have the game halted in the fourth before it was called.

The same thing happened in 1963, in a game against the Senators at D.C. Stadium in Washington, D.C. His second-inning homer off Bennie Daniels didn't survive rain and cancellation of that day's boxscore.

And then, of course, there were the injuries that cost him a cumulative 21/2 seasons: broken collarbone, broken finger, fractured arm. Considering he played 22 years, injuries were inevitable. But not, perhaps, to the extent he lost nearly 10 percent of his career to the disabled list.

The home runs simply didn't matter as much as that other statistical tribute to a great player's career: 3,000 hits, which Kaline had nailed down eight days earlier, against Orioles left-hander Dave McNally. It came by way of a double down the right-field line. And of all the places he would get his 3,000th, it happened to be in Baltimore, at Memorial Stadium, with his dad, Nicholas, and mother, Naomi, in the stands.

Kaline had made it known well ahead of September that 1974 would be his last season as a player. He had seen a personal idol, Willie Mays, hang on too long and fall down in center field during his final season with the Mets. And neither Kaline nor his wife of 60 years, Louise, wanted a career as accomplished as his to end on a pitiful note.

He took off his uniform that day at Tiger Stadium, got ready for a 40th birthday and, with anxiety he had not anticipated, began to wonder about a life without baseball.

"What do I do?" Kaline remembers of thoughts he says were nothing less than "scary" for a kid who had joined the Tigers out of high school in 1953 and who never played a day in the minor leagues.

"I don't have a job," he said, retracing his mind's steps during that autumn of 1974. "I don't have any education other than high school."

He would have considered managing in the minor leagues, perhaps at Toledo or some such regional stop, Kaline says, even though Toledo was then a Phillies affiliate.

"I would have done anything," he said last week.

But no more than the Red Wings knew quite what to do with Gordie Howe after Howe retired, the Tigers never viewed Kaline as a resource that could be happily plowed into their system.

Only when he moved to the Tigers television booth in 1977 as an analyst did Kaline's experience and insight begin to find an outlet, which evolved into owner Mike Ilitch naming him, as well as Willie Horton, a front-office assistant in 2001.

This has been a good fit, Kaline says. A great fit, really, for a man who still hits the ballpark regularly, who continues to invest in a single team and game all he has learned from a lifetime in baseball.