An infield that had been dealing with life minus Jose Iglesias was back in alignment Thursday at Angel Stadium of Anaheim.

Kole Calhoun of the Angels breaks his bat during his at-bat in the first inning. Victor Decolongon/Getty Images
Fullscreen

Johnny Giavotella throws to first base for the double play as Ian Kinsler starts his slide into second base in the first inning. Victor Decolongon/Getty Images
Fullscreen

Tigers third baseman Nick Castellanos can't get a glove on a bunt by Grant Green during the second inning. Chris Carlson/Associated Press
Fullscreen

Matt Joyce is greeted in the dugout after a home run against the Tigers during the second inning. Chris Carlson/Associated Press
Fullscreen 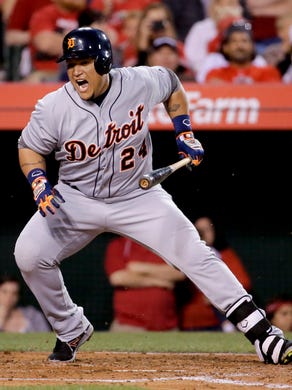 Miguel Cabrera, right, reacts after getting hit by a pitch as catcher Chris Iannetta reaches for the ball during the third inning. Chris Carlson/Associated Press
Fullscreen 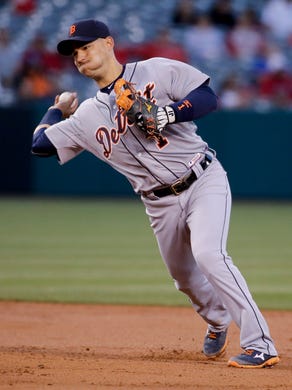 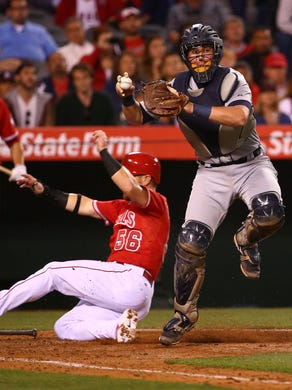 Catcher James McCann of the Tigers steps off home plate after getting the force out at home plate on a sliding Kole Calhoun in the sixth inning. Victor Decolongon/Getty Images
Fullscreen 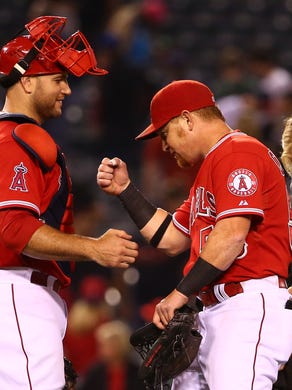 Anaheim, Calif. — An infield that had been dealing with life minus Jose Iglesias was back in alignment Thursday at Angel Stadium of Anaheim.

Iglesias returned to regular duty, and to Tigers manager Brad Ausmus' lineup, following a five-day layoff due to a bruised left knee.

Iglesias hurt the knee in last Saturday's game against the Astros at Comerica Park when he collided with first baseman Chris Carter.

Iglesias is batting .333 on the season. One of the stand-ins who worked in his absence, rookie shortstop Dixon Machado, was notified Thursday he would be returning to Triple A Toledo, as all parties, Machado included, expected.

The Tigers needed to drop a player from their 25-man roster when Buck Farmer, who was to start Thursday's game against the Angels, was added to the roster.

Machado, of course, was made expendable when Iglesias returned. Overall, Ausmus thought a 23-year-old man getting his first taste of the big leagues did just fine in this week's two starts.

"After that first game he did exactly what we had seen in spring camp," said Ausmus, who preferred to give Machado a pass on his big-league debut when an error and some bad at-bats made for a less-than-stellar impression. "He gave us good-at-bats (Machado got his first big-league hit Thursday) and his defense was fine."

Ausmus had a conversation Thursday with Machado, who knew along with everyone else that his first splash of big league life would be brief.

"He understood," Ausmus said. "This was a good first step. It makes you feel like you can earn your way back."

The Tigers had only five hits Thursday against three Angels pitchers, two of which came from catcher James McCann.

The other Tigers hits, all singles, belonged to Rajai Davis and J.D. Martinez.

Once their rookie starter, Buck Farmer, was excused in the sixth, the Tigers brought on three relievers.

Angel Nesbitt allowed a hit and a run, while Tom Gorzelanny, who had pitched admirably for much of the spring, ran aground in the seventh.

Yoenis Cespedes has, for the time being, replaced J.D. Martinez as the Tigers cleanup batter.

It isn't necessarily a long-term adjustment, Ausmus has made clear. But a manager played a hunch Wednesday in Oakland and Cespedes answered with a three-run home run in the Tigers' 3-2 victory over the A's.

"Why change it?" Ausmus asked rhetorically, when quizzed about Cespedes' return to the No. 4 slot Thursday, which saw Cespedes go 0-for-4, with a pair of strikeouts.

Cespedes was batting .291 ahead of the Tigers-Angels series, but slipped to .285 with his four hitless trips Thursday.

He arrived for Thursday's game with the second-most doubles in the American League (16). He was tied for fourth in extra-base hits (23).

A man whose right arm might as well have been pulled from a gun rack also has four assists, tied for sixth in the American League.

RH Anibal Sanchez (3-5, 6.12 ERA), Tigers: Has had a bizarre spring, allowing too many home runs, even on days when his strikeouts and overall pitch quality have been impressive. It's a simple matter of better pitch location for a starter who should be one of the league's best.

LH Hector Santiago (3-3, 2.47 ERA), Angels: Another example of how the Angels have been competing with pitching that hasn't been matched by their offense. Santiago has a top-notch repertoire that can be tough on a Tigers team that has had its issues scoring runs.