Justin Verlander: "As a true baseball fan, you should vote correctly and not just vote for just your team."

Who should be the American League starters in the All-Star Game? Go through the gallery to see the most deserving candidates, according to Rod Beard of The Detroit News. Included with Beard's analysis is the voting leader at each position through Monday. (Statistics through Sunday's games.) Illustration by Richard Epps, Detroit News
Fullscreen

CATCHER: Salvador Perez, Royals: .285 average, 10 HR, 29 RBIs. Royals fans may have gotten this one right. It depends on a fan’s taste, but Perez is a very good defensive catcher and has decent numbers at the plate, as well. The Athletics’ Stephen Vogt (.273 average, 11 HR, 40 RBIs) deserves a look too. VOTE LEADER: Perez. Ed Zurga, Getty Images
Fullscreen

THIRD BASE: Josh Donaldson, Blue Jays: .315 average, 17 HR, 45 RBIs. As the Blue Jays have streaked of late, Donaldson has been hot for much of the season, carrying them through the doldrums. There’s an argument for Mike Moustakas here, but Donaldson has done well in all phases of the game. VOTE LEADER: Moustakas, Royals (.318, 5 HR, 20 RBIs). Tom Szczerbowski, Getty Images
Fullscreen

SHORTSTOP: Jose Iglesias, Tigers: (.335, 1 HR, 9 RBIs). Now healthy, Iglesias is showing that he’s not only one of the best defensive shortstops in the game, but pretty good with the bat too. The Tigers might miss Jhonny Peralta’s power, but the intangibles that Iglesias brings are worth the price of admission. VOTE LEADER: Alcides Escobar, Royals (.255, 2 HR, 18 RBIs). Robin Buckson, Detroit News
Fullscreen 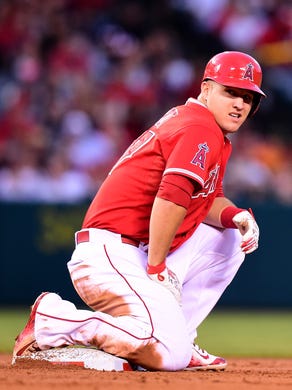 Detroit — The Kansas City Royals were the Cinderella team of last season's playoffs, with their run from a wild-card qualifier all the way to the World Series, before falling to the San Francisco Giants.

The Royals — and their fans — are raising a few more eyebrows this year, with several of their players leading in fan voting for the All-Star Game. With the latest tallies released on Monday, eight Royals are on pace to start in the All-Star Game on July 14 in Cincinnati.

With Major League Baseball switching to all-online voting this year to determine the starters, it seems that the Royals fans are making a concerted effort to ensure that they'll see an inordinate number of their players in the starting lineup.

The only non-Royals player who is in a starting position in the current standings is Angels outfielder Mike Trout, who trails the Royals' Lorenzo Cain by about 650,000 votes. Catcher Salvador Perez is the American League's leading vote-getter at 7,202,292 votes.

"Every year, there are players who people say should get in and players they say shouldn't get in. They tried to adjust the process," Tigers manager Brad Ausmus said Monday. "They changed it so the starters were voted in by fans and the reserves voted in by the players. It's been an evolution the last decade, the All-Star Game selection. I just don't have an answer.

"The Kansas City Royals fans are out-voting all the other fans in the country and in Canada. That's all I can say."

The current fan-voting system comes at the expense of stars like the Tigers first baseman Miguel Cabrera, who trails Kansas City's Eric Hosmer by more than 475,000 votes. Royals fans aren't bending the rules to get their players in the starting lineup, but Tigers pitcher Justin Verlander thinks they could handle things differently.

"I know that every fan likes their own team and you can't ask them to be impartial, but as a true baseball fan, you should vote correctly and not just vote for just your team," Verlander said. "There are some players starting right now that it's very easy to look at and say they should not be."

Although the Royals fans' ploy is starting to get national attention, there might not be much that Major League Baseball can do about it, especially given that fan voting was put in place to allow the most popular players to be chosen.

There could be some tweaks to the system, but it's unclear whether anything would happen for this year, even if the results are unprecedented.

Ausmus stopped short of calling the system flawed, but pointed to the Royals fans taking advantage of what's in place and this year being more of an anomaly.

"If this happened on an annual or bi-annual basis, I would say it is flawed," Ausmus said. "I think it is more a fluke than flawed at this point."

Verlander said some of the onus will fall of MLB if the voting trend continues.

"It's hard and I know it's not easy for MLB. If the voting holds where it is, they're going to have a lot of questions to answer this year. I don't know exactly what to do," he said. "Obviously, the fans are an integral part of this and an important piece to the puzzle, so you want to keep them involved.

"How do you do that and not have it become a joke? I don't know that answer."

There is precedent for altering the All-Star lineups, even after the fan vote. In 1957, the Cincinnati Reds fans voted seven of their players into the All-Star Game and commissioner Ford Frick overruled their voting, putting Hank Aaron and Willie Mays into the starting lineup.

That incident led to voting being taken away from fans until 1970.

Verlander did take solace in the fact that if the Royals dominate the All-Star voting, it's a complement for the Tigers and the other teams in the AL Central.

"It's hard to believe that we're playing against the All-Star squad every couple weeks in our division."