In Rondon's last six outings, he had blown three saves and given up four runs, six hits and five walks in six innings. 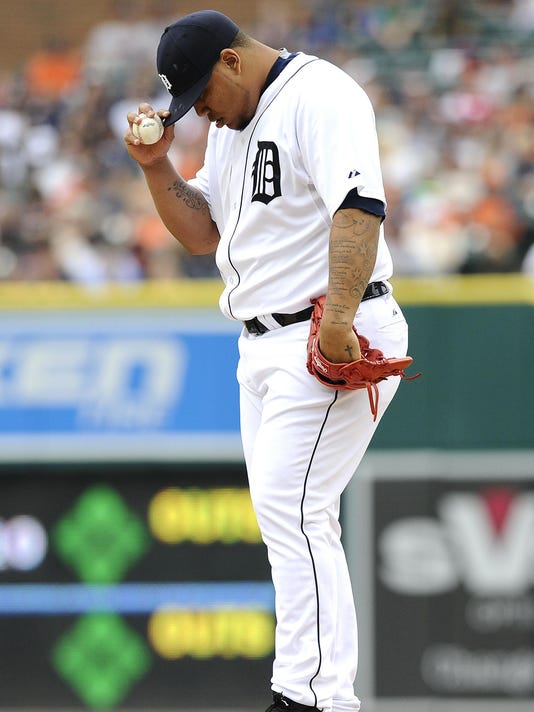 Detroit — Brad Ausmus asked for the media to be in his office right when the clubhouse opened at 3:38 p.m. Tuesday.

"I've got something for you guys," he said.

It wasn't a gift. It was a bombshell.

"Bruce Rondon, because of his effort level, has been sent home," Ausmus announced. "And other than saying that (general manager) Al Avila and myself completely agreed on it, there will be no other details or comment."

It has been clear for a couple of weeks that something was amiss with Rondon. In his last six outings, he had blown three saves and given up four runs (three earned), six hits and five walks in six innings.

His fastball in his last two outings ranged from 93 to 96 mph, well below his usual 97-100. He kept telling Ausmus and the medical staff that he felt fine physically, though a week ago Monday against the Twins, he complained of arm tightness which he said was from being off for six days.

He also said that day he had throttled down his fastball on purpose, in order to have better command. Ausmus and pitching coach Jeff Jones advised him against that strategy.

He pitched a scoreless inning in the nightcap Monday, again with his fastball averaging 93 mph.

After brush with history, Tigers settle for walk-off win

Afterward, Ausmus had very little to say about Rondon, only that he "said he felt fine" and that "he got three outs."

Rondon, who has seemed increasingly, and uncharacteristically, surly the last couple of weeks, refused to speak to the media.

It's certainly a line-in-the-sand moment for the Tigers. Rondon, who for three years has been the closer in waiting, is under team control through 2020. Before the doubleheader Monday, Ausmus was asked which player in the final weeks of this season could most affect his status for 2016 and he didn't hesitate —Rondon.

To say the least, Rondon has a lot of bridges to mend before next season.

"To be a big component of the team, you've got to be here on the team," Alex Avila said. "There's nothing else really for me to say."

Reliever Alex Wilson said he could see this coming for Rondon.

"Hopefully he comes back next year with a new mindset and attitude. He's a guy with a big arm and he can help us. But it's going to have to be figured out between the ears before he can get on the field."

Rondon's frustrations this season go all the way back to the end of spring training. After missing the 2014 season recovering from Tommy John surgery, he seemed to have won a spot on the 25-man roster — only to incur biceps tendinitis.

He didn't work his way back to Detroit until June 25, struggling mightily through his rehab outings in Toledo. He wasn't immediately recalled to Detroit after he was cleared, either. He spent another week in Toledo.

Even when he got back with the Tigers, his performance was erratic. He incurred the wrath some of his teammates for slacking on his conditioning work in between outings.

Tigers' Ryan welcomes return to bullpen as a relief

After closer Joakim Soria was traded to Pittsburgh, Rondon wasn't immediately designated as the closer — which didn't sit well with him. Alex Wilson, who had been the team's most reliable bullpen arm all season, was the closer until he was shut down with arm fatigue.

Finally, six weeks ago, Rondon was given the closer role. Nothing changed. Except for a brief stretch of four strong outings, he continued to pitch erratically and at times disinterestedly. He had five saves and four blown saves since Aug. 8.

"I think he's just got a little growing up to do still," Wilson said. "It's just one of those things. It's going to be up to him. No one else's decision but his. If he can come back and help us, we're obviously going to welcome him back with open arms.

"You never want to see a guy hurt himself, especially off the field and between the ears. I've seen it done before, seen it happen before. He's just got to be smart."

"Brad and I met and we both agreed this course of action is best for Bruce and the club as we move forward," Al Avila said.

The Tigers are not saying what the future holds for Rondon. But the ball clearly is in his court.