Verlander dials it up to secure Tigers' victory

Right-hander, who was registering between 90-93 mph, hit 99 to close out White Sox in pivotal seventh inning.

Verlander dials it up to secure Tigers' victory

Tigers pitcher Justin Verlander waits for a bee to clear his area before the next pitch in the first inning. The Tigers split the four-game series, winning 7-4 over Chicago White Sox on Wednesday, Sept. 23, 2015, at Comerica Park in Detroit. Robin Buckson, Detroit News
Fullscreen 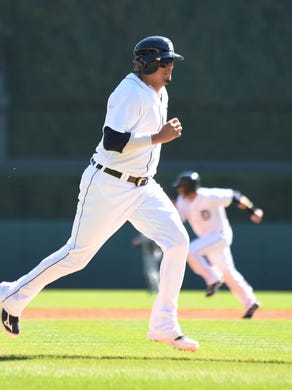 Tigers' Victor Martinez , left, heads home to score on a single by Nick Castellanos in the third inning to give the Tigers a 5-0 lead. Robin Buckson, Detroit News
Fullscreen

Tigers' Miguel Cabrera, who had the day off, congratulates Victor Martinez after Martinez scores on a single by Nick Castellanos in the third inning. Robin Buckson, Detroit News
Fullscreen

Tigers outfielder Rajai Davis hustles to third base on his triple in the fourth inning. Davis went 3-for-4. Robin Buckson, Detroit News
Fullscreen

Tigers pitcher Blaine Hardy works in the eighth inning. Hardy pitched two-thirds of an inning, allowing one hit with one earned run, one walk and one strikeout. Robin Buckson, Detroit News
Fullscreen 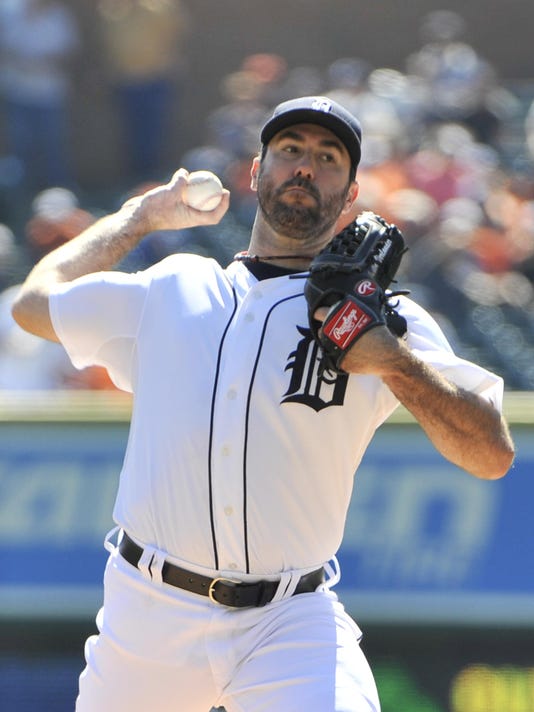 Detroit — Very suddenly, the game was on the line.

After cruising through six innings with a 7-2 lead, Justin Verlander gave up three straight hits and a fast run in the seventh. The White Sox had runners on second and third and only one out.

It was at that point that Verlander flipped it into hyperdrive.

His fastball had been registering between 90-93 mph the whole game. But he struck out Carlos Sanchez with 94, 95 and then 96. And he was just getting loose.

"He's got a knack for being able to turn it up when the heat is on," manager Brad Ausmus said after the 7-4 win Wednesday. "His velocity was probably the best we've seen all year in that one inning."

"I don't know where that came from," McCann said. "That's impressive. Especially in September, late in the season, finding a way to bear down and reach back for all you've got for a couple pitches, very impressive. That's vintage Ver."

Funny thing. Pitching coach Jeff Jones had come to the mound before the Sanchez at-bat — stepping on the gas wasn't the plan.

"Honestly, the sequence we went with was not the sequence we talked about," Verlander said. "But the first fastball I threw, Mac was like, 'Holy crap.' I had the same feeling, honestly, so we stuck with it. It was nice to feel it come out like that, especially after how the beginning had gone."

Verlander said his body felt lethargic, though he'd only allowed two hits, one a two-run home run by Melky Cabrera in the fourth. That was an irksome inning for Verlander.

There were two outs and he thought he had the previous hitter, Trayce Thompson, struck out on a 2-2 fastball. He ended up walking him and Cabrera blasted the next pitch over the fence in right.

Verlander had some words for home plate umpire Tom Woodring.

"Some calls go your way and some don't," Verlander said. "Obviously, when you are pitching you want every call. That's not the way it goes. I needed to refocus and make a better pitch and don't walk him.

"That's the thing I am kicking myself in the butt for, that walk, especially after we had scored some runs to break it open."

The White Sox scored a run off Blaine Hardy in the eighth, but Neftali Feliz, who'd blown a save Tuesday, pitched a clean ninth inning to close it out.

"He's still the same type of pitcher," White Sox manager Robin Ventura said of Verlander. "I think he has a presence out there. He's able to locate and execute. You get him down to the end where you get him in a little bit of a bind and he can reach back and grab something extra."

Seven runs. Verlander hadn't seen that much run support all season. In eight of Verlander's 18 starts this season, the Tigers have produced two runs or less.

"That helped big-time," Verlander said. "Especially the early runs. Victor (Martinez) getting his 200th home run. I was able to attack guys."

Martinez whacked a two-run homer in the first, making him one of six Venezuelan-born players to reach that milestone.

"I knew, I knew," Martinez said. "But obviously, I'm not looking for homers, I'm looking to get hits. It felt great, but the most important part was that we were able to pull out a win."

The Tigers blew it open against rookie Frankie Montas in the third. J.D. Martinez whacked a two-run double, Nick Castellanos singled in another and the fourth scored on an Alex Avila ground out.

Rajai Davis, who had three hits, tripled and scored on an Ian Kinsler single in the fourth. It was the career-best 11th triple for Davis.

Verlander took it from there, leaving the field to a rousing standing ovation after striking out Soto in the seventh. It almost felt like old times.

"That never gets old," he said of the ovation. "It was nice to have that support after the big inning. That was a pivotal point in the game. Emotions were riding high, a lot of adrenalin. To be able to get out of it in that fashion, that felt pretty good."