It was the Tigers' third straight win. The Twins' loss drops them two games out of the second wild-card spot.

Tigers' Rajai Davis is all smiles after his two-run home run in the eighth inning to make it 6-4 Tigers, Friday Sept. 25, 2015, at Comerica Park in Detroit. The Tigers beat the Twins 6-4. Robin Buckson, Detroit News
Fullscreen

Tigers' J.D. Martinez, front, is called out sliding into third base with Twins' Trevor Plouffe on the play in the second inning. Robin Buckson, Detroit News
Fullscreen

Twins' Trevor Plouffe heads home to score on a triple by Eddie Rosario in the fifth inning to make it 3-0 Twins. Robin Buckson, Detroit News
Fullscreen

Twins' Trevor Plouffe, right, congratulates Miguel Sano after they both, along with Torii Hunter, score on a triple by Eddie Rosario in the fifth inning. Robin Buckson, Detroit News
Fullscreen

A throw from Tigers' Ian Kinsler gets past catcher James McCann on a sacrifice fly by Eduardo Escobar which scores Eddie Rosario in the fifth inning. Robin Buckson, Detroit News
Fullscreen 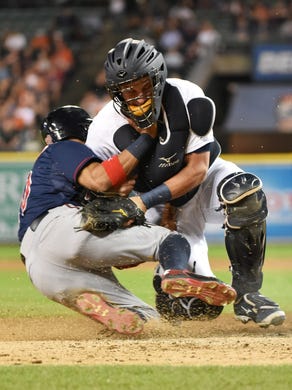 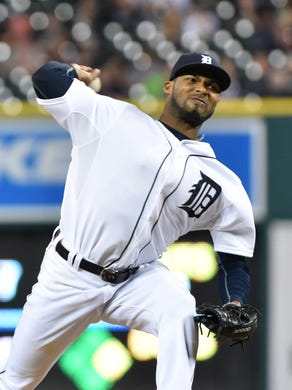 Tigers' Dixon Machado is congratulated after he scores on a ground rule double by Ian Kinsler to make it 4-2 Twins in the seventh inning. Robin Buckson, Detroit News
Fullscreen

Tigers third baseman Nick Castellanos is given a throwing error on this play in the fifth inning, loading the bases. Robin Buckson, Detroit News
Fullscreen 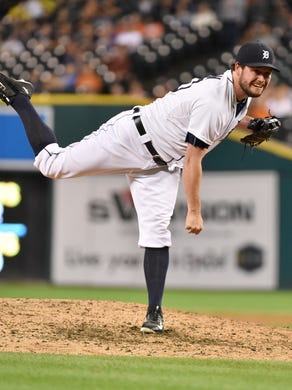 Tigers first baseman Miguel Cabrera looks down at the ball after a fielding error in the eighth inning. Robin Buckson, Detroit News
Fullscreen

With two men on base, Tigers pitcher Alex Wilson throws to first for the out on Twins' Miguel Sano to end the top of the eighth inning. Robin Buckson, Detroit News
Fullscreen

Tigers' Nick Castellanos motors past Twins' Joe Mauer on his way to second base in the eighth inning. Robin Buckson, Detroit News
Fullscreen

Tigers' James McCann walks back to the dugout after a called third strike in the eighth inning. Robin Buckson, Detroit News
Fullscreen

— At one point in the seventh inning Friday, the Tigers were outhitting the Twins, 9-1, and losing the game, 4-1.

"I looked up there and was like, 'Something's going on; what is it?" Rajai Davis said. "But the guys kept getting hits and getting on base and we finally got that clutch hit."

It was Davis, actually, who got the scoreboard to make sense with two huge at-bats.

First was a marathon, 14-pitch at-bat in a three-run seventh that seemed to wear out reliever Casey Fien. The second came with two outs in the bottom of the eighth when he hit a 3-2 pitch from Glen Perkins over the wall in right field — a two-run shot that sent the Tigers to a 6-4 win over the Twins.

"I did hear about it," Davis said. "He was pretty vocal about it. It's nice when your team has your back and rooting for you and for the win."

Davis threw his hand in the air triumphantly as the ball went out.

"Just in case they didn't see where that ball went, I had to point it out," Davis joked.

It was the Tigers' third straight win, and the second game-winning hit by Davis in that span. It keeps their tragic number (to be mathematically eliminated) at two and it knocks Minnesota back a half-game, now two games out of the second wild-card spot.

Back to the seventh inning.

With Dixon Machado on first and one out, Davis worked Fien for 14 pitches before flying out to left. He fouled off nine, six in a row at one point. It was hard labor for Fien, and he wound up walking Anthony Gose and giving up a run-scoring double to Kinsler.

"I think it definitely helped, no doubt," Kinsler said of Davis' at-bat. "It frustrated (Fien) a little bit, wore him down a little bit. He had a tough time finding the strike zone against Gose and I got a really good fastball to hit.

"That's the game of baseball right there."

Kinsler's blast bounced into the shrubbery in center field. Machado scored but Gose was sent back to third on the ground-rule double.

That was it for Fien. Twins manager Paul Molitor brought in lefty Perkins, who walked Miguel Cabrera semi-intentionally to load the bases.

Victor Martinez, who was 0-for-3 batting left-handed, slapped a two-run double from the right side of the plate to tie the game.

"Especially right-handed," manager Brad Ausmus said when asked if he was confident in Martinez in that spot. "He's swung the bat a little bit better right-handed, because of that knee. But I always feel like Victor's got a chance."

It was just the second time Perkins has failed to hold a lead against the Tigers in his career. He has 13 saves and five holds. Davis, who saw a total of 31 pitches and had two hits, pinned the loss on him with his eighth homer of the season.

"In the past he's thrown me a lot more fastballs," Davis said. "He gave me one fastball, that was it. He was trying to bury that slider, but I made up my mind I wasn't going to be over-aggressive. Just take what he gives me and not try to do too much."

After Alex Wilson worked around a Cabrera error and an infield single in the eighth, Neftali Feliz pitched a clean ninth for his ninth save.

So how did the Twins score four runs with just one hit?

"That was a little unusual, but that's what the Twins do," Kinsler said. "They are fundamentally sound and they play the game the right way and take advantage of situations."

Tigers rookie Matt Boyd was zipping along. He'd faced the minimum number of Twins hitters without allowing a hit through four innings. But he walked the first two in the fifth and trouble was knocking.

Torii Hunter then reached on the first of two odd defensive plays. Nick Castellanos fielded Hunter's slow ground ball but inexplicably tried to underhand the ball to second. Kinsler had to leap off the base to flag the high toss — everybody was safe; bases loaded.

Eddie Rosario then collected the Twins first hit — a bases-clearing triple that appeared to hit off a fan's glove above the wall in right-center field. The umpires reviewed the play, ruled it was fan interference but changed nothing — Rosario still had a three-run triple.

With one out, Eduardo Escobar hit a pop-up to shallow right field. Kinsler caught it flat-footed but his throw was still in time, but it skipped past catcher James McCann.

Four runs, one hit. According to Baseball Reference, the Twins were just the fourth team since 1914 to produce four or more runs with just one hit in an inning.