The Tigers have reportedly agreed to terms with outfielder Justin Upton, who is a career .271 hitter (1,175-for-4,329) in nine seasons in the majors with the Diamondbacks, Braves and Padres. David Zalubowski, Associated Press
Fullscreen

Justin Upton blows a bubble as he heads to the dugout after striking out in an August 2015 game against the Nationals. Alex Brandon, Associated Press
Fullscreen

In his only season with the Padres, Upton had 28 home runs, 81 RBIs and batted .251 in 150 games. Lenny Ignelzi, Associated Press
Fullscreen

Upton was dealt to the Padres from the Braves along with Aaron Northcraft for Max Fried, Jace Peterson, Dustin Peterson, and Mallex Smith on Dec. 19, 2014. Gregory Bull, Associated Press
Fullscreen

Justin is the younger brother of Melvin (formerly B.J.) Upton. 5 gum created customized life-size bobbleheads for the Upton brothers, who played together on the Braves. Rick Diamond/Getty Images
Fullscreen

Upton hit a career-best 31 homers in 2011 with the Braves. Getty Images
Fullscreen

In his first season with the Diamondbacks, Upton batted .221 with two home runs and 11 RBIs in 43 games. Getty Images
Fullscreen

Upton had a career-best 21 steals in 2011 with the Diamondbacks. Dustin Bradford/Getty Images
Fullscreen

Upton was dealt from the Diamondbacks with Chris Johnson to the Braves in exchange for Martin Prado, Randall Delgado, Nick Ahmed, Zeke Spruill, and minor league first baseman Brandon Drury on Jan. 20, 2013. The trade united him with brother Melvin, who was a member of the Braves. Ralph Freso/Getty Images
Fullscreen

Upton gets hit in the head with a pitch against the Giants on Sept. 25, 2011. That season he was hit 19 times. Christian Petersen/Getty Images)
Fullscreen 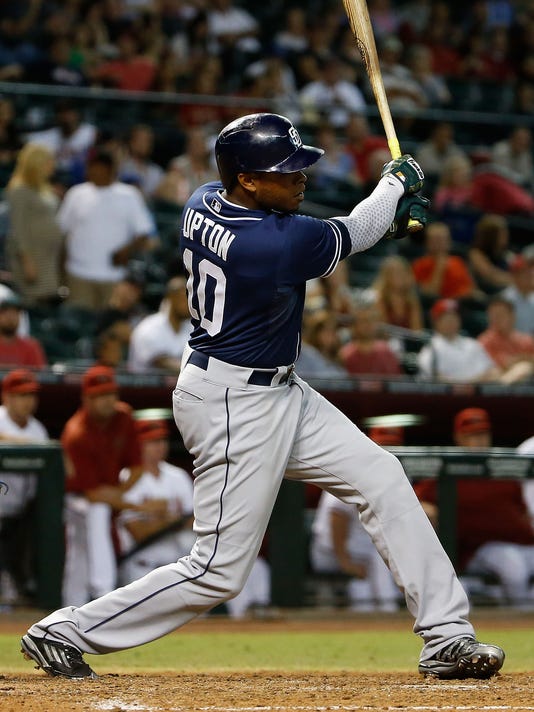 Detroit — The Tigers agreed to terms with one of the biggest names left on the free-agent market, outfielder Justin Upton, on Monday night.

The deal, pending Upton's passing of a physical, is for six years and $132.75 million, Tigers officials confirmed. Ken Rosenthal of Fox Sports and MLB Network first reported the deal.

The contract includes an opt-out after the second year. Upton is expected to have his physical on Thursday.

Since the Winter Meetings, general manager Al Avila has maintained the Tigers weren’t likely to add another expensive contract. The Upton deal, averaging $22.12 million per year, will almost assuredly put the team over the luxury tax threshold.

How Tigers batting order shapes up with Upton

But owner Mike Ilitch has a history of stepping in late and acquiring another piece, regardless of the cost. He signed Prince Fielder for $214 million in 2012, and before that worked February deals with Magglio Ordonez, Pudge Rodriguez and Johnny Damon.

Presently, the Tigers have spent $272.25 million in free agency this offseason, second only to the Cubs. In all, they've landed two starting pitchers (Jordan Zimmermann and Mike Pelfrey), rebuilt the back end of the bullpen (Justin Wilson, Mark Lowe and Francisco Rodriguez), added outfielders Cameron Maybin and Mike Aviles and back-up catcher Jarrod Saltalamacchia.

Then Ilitch gave the green light to pursue Upton. According to USA Today, Avila and manager Brad Ausmus visited Upton at his home in Phoenix last Friday.

Upton, 28, and a three-time All-Star, will essentially replace Yoenis Cespedes, who was traded in July, as the team’s starting left fielder and places him in the heart of the order with Miguel Cabrera, Victor Martinez and J.D. Martinez.

A streaky hitter, he posted a .251 average with 26 home runs and 81 RBIs with the Padres last season. He has hit at least 26 home runs in four of the last five seasons.

Because the Padres gave Upton a qualifying offer, the deal will cost the Tigers their third draft pick this year. They lost their second pick by signing Zimmerman and their first pick, ninth overall, is protected.

In his nine seasons, all in the National League, Upton has amassed 190 home runs and 616 RBIs. He has a .271 career batting average with and .352 on-base and .825 OPS. The right-handed hitter has done most of power damage against right-handed pitching — 130 homers and 459 RBIs.

Prior to Upton, the Tigers had planned to platoon Anthony Gose and Tyler Collins in left field, with Gose and Maybin playing in center. Now, Gose and Maybin will share center and Collins, a left-handed hitter, will probably have to battle Aviles for a roster spot.