Former Tiger was influential in Upton's formative years as a major league player.

New Tigers outfielder Justin Upton sits as he is interviewed on the radio following his introduction to the media. Steve Perez, Detroit News
Fullscreen 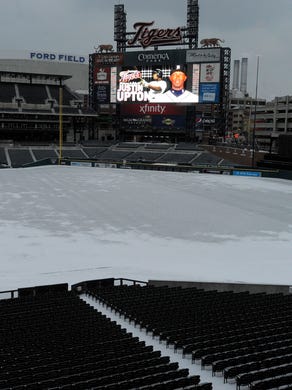 Detroit — When Justin Upton got to the big leagues with Arizona in 2007, his outfield coach was Kirk Gibson.

“I was a young kid and he really got me along early on,” said Upton, who was a 19-year-old phenom in 2007. “He really helped me through those early years.

But the relationship was strained after Gibson became the manager in 2010, to the point where he had to bench a struggling Upton for a brief time in 2013.

“As a manager, you have to deal with more and more personalities and there is a lot more pressure on you,” Upton said. “So the personal part of it got dismissed. But when I was spending a lot of time with him as an outfield coach, it was awesome.”

Upton was traded to the Braves after the 2013 season, and there was plenty of media speculation that Upton’s poor relationship with Gibson hastened the move. Gibson has always denied it. Here’s what he told a Phoenix radio station after the trade:

“I had a good time working with him. I feel like I taught him a lot. I feel like I shared many experiences with him on the way up and that he took those well. Were there times when maybe I said things that he didn’t like? I’m sure there were. Sparky Anderson did the same to me. It’s part of baseball. It’s part of coaching. I think some things are blown out of proportion.

“He did not frustrate me. I liked the way he played. I thought he busted his (butt) all the time. Did he make mistakes, yeah. But I will tell you I will never forget the mistakes that I made, too…I really had no problem with Upton at all. He had a ton of ability and I think there’s a lot more left in him.” Flash ahead to earlier this month. The Tigers, having gotten the green light from owner Mike Ilitch to pursue an elite free agent left fielder, were vetting Upton. He was No. 1 on their list, ahead of Alex Gordon and Yoenis Cespedes, and they asked Gibson and Alan Trammell (who was with Gibson in Arizona) for their input.

“They loved him,” Avila said. “Gibson recommended him highly. You couldn’t get a better recommendation. They loved him and it gave me a lot of confidence in going after him.”

“I still have the utmost respect for Gibby,” Upton said. “Not only what he did in the game, but as a young player, he’s a guy I learned a lot from him. I am sure I will be bumping into him around here. There are no hard feelings.”

Upton, a three time All-Star, has averaged 25 home runs, 30 doubles and 16 stolen bases the last seven seasons. He brings a career .352 on-base percentage and a .825 OPS. Still, surprisingly, he remained on the market deep into January.

“It was kind of a slow process,” he said. “My agents were in my corner, keeping me patient, but it was tough at times. But what sold me (on Detroit) was Mr. Ilitch is a guy who wants to win ballgames and wants to win a championship.

“That had been one of the big talking points for me; I wanted to be in a winning situation. I want to be part of a winning ball club and that’s the atmosphere they create here.”

He also got a push from former Tiger Torii Hunter, who shares the same agent (Larry Reynolds).

“He had nothing but great things to say,” Upton said. “His first comment was, being with the Twins for years, he hated Detroit, hated everybody here. Every time he came here he just wanted to win every game and leave. But he said when he played here, it was one of the best experiences he ever had.

“He said the team itself, it’s a winning atmosphere, and the fans love their players. He said if you go out there and play the game the right way and have a smile on your face every day, the people of Detroit will respect you and love having you here.”

One of the knocks on Upton over the years, and one of the things Gibson would ride him about, is that he is streaky. Upton didn’t dispute it.

“Lack of consistency,” he said. “I’ll carry you for two weeks and then there are times when I disappear. Those are the things I am working on. As I get older, I am finding ways to combat that.”

Being part of the Tigers lineup, hitting with the likes of Miguel Cabrera, Victor Martinez and J.D. Martinez, should help. Opposing pitchers won’t have the luxury of pitching around him as often as they did last season in San Diego.

“It’s great,” he said. “You are talking about some of the best hitters in the league, guys who have been doing it for a long time. It’s definitely a luxury to be around that.”

But, Upton said, after eight seasons, it’s not likely he can completely reinvent himself.

“You learn something every year,” he said. “You go home, digest it and try to come back better. I have had some good years, some so-so years. But the goal of every player is to contribute every day and at the end of the year you look up and know your numbers are going to be there and you have helped the team win.

“At this point, you are the player you are. But you try to do it on a more consistent basis.”

Upton was accompanied Wednesday by his mother and father, his wife Ashley and their two-week-old daughter Sydney, who was given a miniature No. 8 Tigers jersey.

“We did our homework,” Avila said. “And everybody we talked to, all of our reports, there was never a bad thing about Justin Upton. It was all positive. That’s an amazing thing in this day and age.

“We feel like we’ve brought in a great baseball player and a great human being, a guy we are proud to have in the organization.”