Fulmer feeling confident if Tigers want him this season

The Tigers will take a long look at right-hander Michael Fulmer during spring camp and he could land in Detroit in 2016.

Fulmer feeling confident if Tigers want him this season

Gabe Mio, 18 poses for a picture with Detroit Tigers pitcher Justin Verlander as Andrew Baxter, 16, gets emotional as he poses with Tigers Miguel Cabrera before taking a tour of the GM Heritage Center. Daniel Mears, Detroit News
Fullscreen 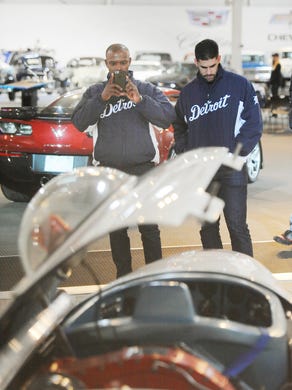 Detroit Tigers Justin Upton would certainly be more comfortable in this 1977 GMC Motor Home than even the finest hotel while on a long West Coast road trip. Daniel Mears, Detroit News
Fullscreen 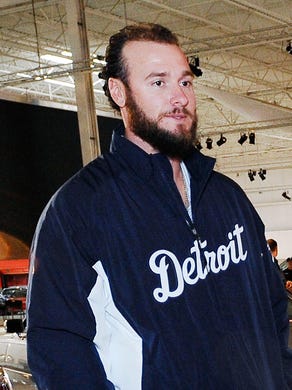 Detroit Tigers Jarrod Saltalamacchia, right, comments about the 1931 Cadillac V16 with an extra speedometer in the backseat, "My grandma would sit back there and say slow your $%& down" touring the GM Heritage Center with teammate Buck Farmer. Daniel Mears, Detroit News
Fullscreen 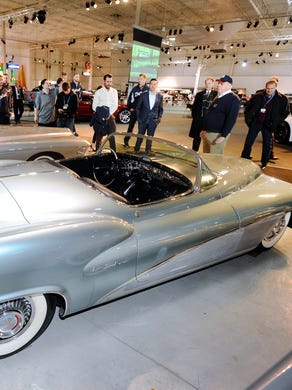 Detroit Tigers players take a tour of the GM Heritage Center including the super sexy 1951 Le Sabre Concept, inspired by the lines of the F-86 Sabre jet fighter, featured two seperate fuel systems, one for gasoline and the second for alcohol to provide extra boost for the supercharged V8. Daniel Mears, Detroit News
Fullscreen

Detroit Tigers J.D. Martinez climbs out of the 1969 512 Electric Experimental vehicle that when fully charged at 25 mph would go a total of 58 miles. Daniel Mears, Detroit News
Fullscreen

Judy Essenmacher of Walled Lake cheers with both arms up alongside Mary Gruber of Rochester, left, when the Tigers take the stage at Chevrolet. Robin Buckson, Detroit News
Fullscreen 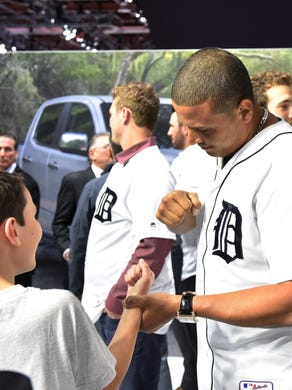 Tigers' Justin Upton comes over for a closer look at the 2017 GT that Justin Verlander is sitting in at the Ford display. Robin Buckson, Detroit News
Fullscreen

Looking at the Acura NSX display, Nanette Morales of Pleasant Ridge, in black jacket, looks around and realizes these guys must be somebodies, and they are Detroit Tigers. Robin Buckson, Detroit News
Fullscreen 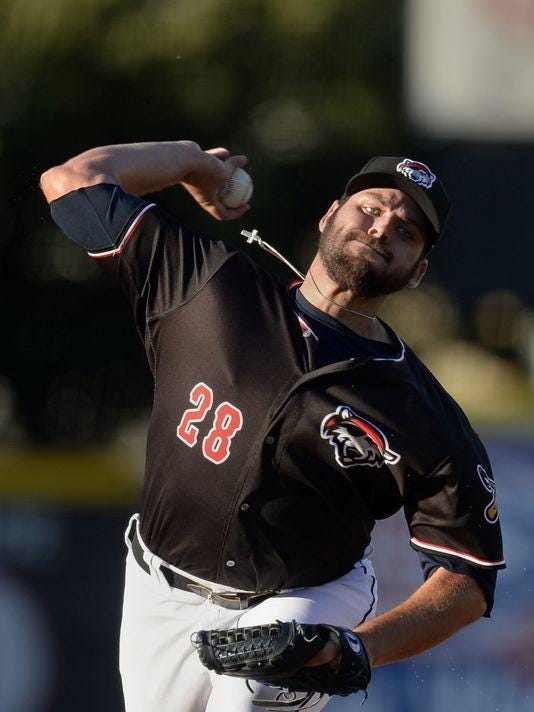 It was the closing minutes of the 2015 interleague trade deadline. The Tigers had gotten owner Mike Ilitch’s go-ahead 48 hours earlier to shop three appealing players who in a couple of months were headed to free agency: David Price, Joakim Soria and Yoenis Cespedes.

With the first two having been dealt (Price to the Blue Jays, Soria to the Pirates), Dombrowski was slipping closer toward an afternoon deadline. The Mets wanted Cespedes. Dombrowski insisted on their top-prospect pitcher, Michael Fulmer.

The phone rang minutes before time expired. Alderson, with a sigh, said “deal.” Fulmer, a 22-year-old, right-handed starter, was on his way to Detroit as Cespedes, who would help the Mets to a deep playoff run, was headed for New York.

Dombrowski had gotten his guy, not that it spared him from his own free agency, which Ilitch soon finalized following the feverish holdout to land Fulmer.

“That’s what Mr. Alderson told me on the phone,” Fulmer said Thursday at Comerica Park, as he joined a roster of Tigers players, and staff, for the Winter Caravan and for today’s TigerFest event.

“He told me how it all went down. I’d never been part of anything like that, but I’m extremely happy it happened.”

There were reasons Dombrowski had insisted on Fulmer, most of which are clear from his 2015 season numbers. In 22 games, all starts and all but one of which were pitched at Double A, Fulmer was 10-3, with a 2.24 ERA and a 1.08 WHIP.

He threw 1242/3 innings, allowed 104 hits, struck out 125 and walked 30. His fastball rides comfortably in the mid-90s and can move a tick or two beyond. He has a slider out-pitch that can vary in speed and break, depending upon how he chooses to throw it.

And, since last season, when he backed away from a decent curveball in a bid to master a better off-speed pitch, he now has a change-up.

The Tigers will take a long look at Fulmer during spring camp. If a tentative script is followed, a pitcher who turns 23 in March will relocate to Triple A Toledo for some buffing and polishing ahead of an expected transfer to Detroit, perhaps at some point in 2016.

“I’ve learned to trust my stuff,” said Fulmer, a 6-foot-3, thick-bodied Oklahoma native who owns a tidy black beard and an easy personality. “I’m at the point where I can trust anything I throw.”

That he could land in the big leagues at some point this year is not news. Not in a developmental sense. Fulmer was grabbed 44th overall, between the first and second rounds, in the 2011 draft. There were heavy expectations when the Mets signed him and watched him move fairly steadily along their farm paths.

He might already have arrived had a torn meniscus in his right knee, and bone spurs in his throwing elbow, not interrupted Fulmer during his 2013 and ’14 seasons.

On a cold Thursday at Comerica Park in January of 2016 a man could think about possibilities — and about a potential return trip.

“My first time in Detroit,” said Fulmer, who was drafted out of Deer Creek High School, in Edmond. “My first time at Comerica. It’s a beautiful stadium.”

The Tigers think so much of his fastball-slider combo there has been loose talk about perhaps making Fulmer a future bullpen closer.

But the team is prepared, for now, to think of him as a starter. He has the size, the power, and, increasingly, the fuller repertoire.

“I’m not big on looking back at charts,” Fulmer said, when asked about his four-seam fastball and velocity. “My goal is to get people out. I’ll work my fastball this way, or that way. It depends on the hitter.

“As for my slider, I’ve learned to vary it since I stopped throwing my curve. It has more break and tilt when I throw it slower, and then I’ve got a faster one that I use almost like a cutter.”

“It’s kind of a Vulcan change,” he said, speaking of what once upon a time was referred to as a “forkball” grip. “It’s like a little splitter, almost.”

And so he will drive to Lakeland, Fla., in a few weeks and get further acquainted with the rhythms and routines during what will be his first full season as a Tigers employee.

If it involves a return trip to Detroit, Fulmer would be pleased. Perhaps no more than an organization that wanted him so desperately last July with a clear purpose and plan in mind.