McCosky: Tigers’ Holaday could be auditioning for other teams

Bryan Holaday belongs in the big leagues. You would be hard-pressed to find anybody in the Tigers’ organization who disagrees.

McCosky: Tigers’ Holaday could be auditioning for other teams

Bryan Holaday was drafted in 2010 and flew through the Tigers' system.(Photo: Detroit News)

Detroit – Bryan Holaday belongs in the big leagues. You would be hard-pressed to find anybody in the Tigers’ organization who disagrees.

Yet, once again it appears circumstances will conspire to keep him out, at least in a Tigers uniform.

It’s one of the cruel realities in baseball. Sometimes having a big league heart and big league talent aren’t enough. Sometimes you also need the numbers to line up for you and that hasn’t happened for Holaday.

Drafted in 2010 out of TCU, Holaday flew through the system, making it to Triple-A Toledo and earning his first call-up to the Tigers in 2012. Over parts of four seasons, he’s hit .251 and earned the trust and respect of a veteran pitching staff, as well as managers Jim Leyland and Brad Ausmus.

In his one extended stay in Detroit, 62 games in 2014, he proved to be a solid backup catcher to Alex Avila. But then James McCann burst onto the scene and Holaday was back in Toledo last season.

Still, Holaday kept fighting. Called up to the Tigers late in the season, he hit .281 with two homers and 13 RBI, playing through a gnarly thumb injury. And when Avila signed with the White Sox in late November, it seemed like Holaday’s perseverance would pay off. He would be the Tigers’ No. 2 catcher behind McCann going into 2016.

Nothing against Holaday, Tigers general manager Al Avila said when the deal was done, it’s just the club needs another left-handed hitter on the bench.

“We like his pop from the left side,” Avila said. “We think that is going to play.”

Holaday could point out that in his time in the big leagues he’s always hit right-handers better than lefties (.280-.211 and .663-.567 OPS). But that’s not his style. He will no doubt do what he’s always done, keep his mouth shut and show up in Lakeland ready for battle.

Only this time he will be auditioning for other clubs as much as for the Tigers. 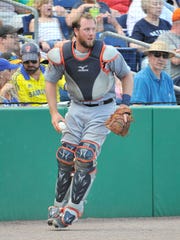 The thought that Bryan Holaday would be the Tigers’ No. 2 catcher behind James McCann going into 2016 was short-lived. (Photo: Robin Buckson, Detroit News)

Holaday is out of minor-league options. If he doesn’t make the Tigers’ 25-man roster out of spring training, he would have to clear waivers before accepting an assignment in Toledo. The Tigers know he wouldn’t clear waivers.

So, barring an injury to McCann or Saltalamacchia -- or unforeseen gross underperformance -- the Tigers are likely to shop Holaday around the league. There are several teams who seem to have a need for a quality backup catcher – two in Holaday’s home state (Astros and Rangers).

Holaday has some value as a trade chip, for sure, but the Tigers also want to do right by him. They know, from Avila to Ausmus on down, that he’s a Major League player and, like they did this week with Jefry Marte, they will try to send him to a better situation.

The question that leaves for the Tigers, then, is who’s the No. 3 catcher?

They have drafted two highly-regarded prospects in the last three drafts – Austin Green, 13th round in 2013 and Kade Scivicque, fourth round in 2015. Both have performed well – Green at Double-A Erie last year and Scivicque in Low-A.

Both have been invited to big league camp, though neither seems ready to make the jump to the big leagues this year.

Two other catchers have been invited to camp, as well.

Miguel Gonzalez, who has some big league experience with the White Sox, is slated to start at Toledo. He has a strong arm behind the plate (he threw out 43 percent of would-be base stealers in Double A in 2014), and hit .242 between Double-A and Triple-A last year.

Raffy Lopez, who is 28 and had a brief stint with the Cubs, is a left-handed hitter with some pop, who is expected also to play in Toledo this year.

You can say, “Who cares about a third catcher?” Well, given the injury rate of catchers, the Tigers do. And you can bet they would feel a lot more secure knowing Holaday was just an hour’s drive up I-75 away.

It’s not happening this year. Holaday, most likely, has punched his ticket on that shuttle for the last time. And the Tigers are probably going to be left scrambling for a suitable replacement.