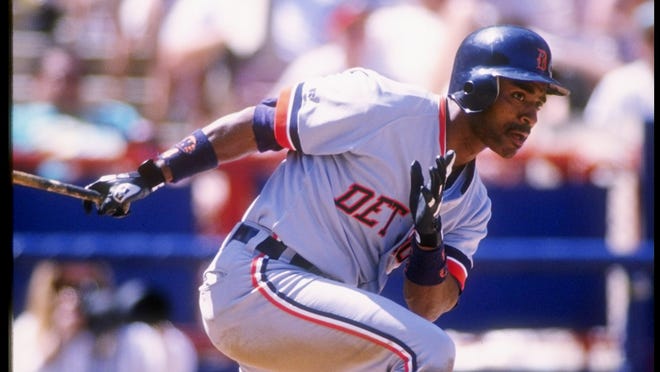 He was the ultimate gamer, not afraid to scrap with those much bigger than his 5-foot-10, 175-pound frame, whatever it took to win.

Phillips, who died Wednesday in Arizona of an apparent heart attack at 56, was the kind of guy you loved to play with, and hated to play against.

"He was the ultimate competitor."

Phillips played 18 seasons in the major leagues, and played all over the diamond — mostly for the A's (nine seasons) and Tigers (five seasons).

He played in Detroit from 1990-94, walking 519 times in those five seasons. A leadoff hitter for Detroit whose unique, crouched batting stance was mimicked — to the chagrin of so many Little League coaches — all over Metro Detroit and Michigan, Phillips led the league in runs in 1992 (114) and walks in 1993 (132).

He once charged after Twins pitcher Scott Erickson, during batting practice, the day after he was hit by a pitch. He once allegedly attacked a Brewers fan in Milwaukee.

Even a few years back, while playing independent ball, he got into a brawl with former Los Angeles Dodgers outfielder Mike Marshall.

"He was a feisty guy," Alan Trammell said. "He was going to speak his mind. He had a lot of piss and vinegar.

"He was a tough son of a guy. But he believed in himself, and he wouldn't back down from anybody."

Trammell, who received the news about Phillips in a text from Cecil Fielder, raved about more than just Phillips' persona.

Trammell argues that for the five years in Detroit and for the couple years afterward, with Ricky Henderson still productive but not the player he was, Phillips was the top leadoff hitter in the game.

Phillips caught the final out of the A's 1989 World Series victory over the San Francisco Giants, and then, after GM Bill Lajoie and manager Sparky Anderson consulted with former teammates in Oakland including Heath, was signed by the Tigers to a three-year contract, worth about $4 million, to be a super-utility player. He ended up playing nearly every day.

Always wagging the bat and spitting his body weight in saliva every at-bat, Phillips was in Detroit where he flourished, buying into the more strict work ethic of the Tigers, compared to the more relaxed A's.

"He probably was like Sparky when Sparky was a player. Sparky always made fun of himself, but Sparky played the game hard. He had to," Dan Petry said. "He probably saw a lot of himself in the way Tony played.

"I mean this with nothing but respect, he was mean. He was a mean guy, just the way he played baseball. He was a big competitor, and an unbelievable teammate. That's what I told him (when he signed with Detroit): 'Man, I'm so glad you're on my side.'"

Phillips, a switch-hitter who also had surprising pop, played mostly third base his first season in Detroit, and mostly outfield after that. But he could play anywhere, and did. Heath said he could play second base as well as anybody — and, yes, Heath played with Lou Whitaker.

Phillips' first three seasons in Detroit were so impressive — he averaged a WAR of five, before anybody knew what WAR was — Mike Ilitch, having just bought the Tigers from Tom Monaghan, extended Phillips on a deal for three years and worth more than $10 million.

A chunk of that money was deferred, which Phillips was happy to note when he attended Tigers fantasy camp for the first and only time about five years ago.

He told Tigers fantasy camp director Jerry Lewis: "Make sure if you see Mr. Ilitch, thank him. I'm still living off that money!"

As hardcore as he was on the field, he was among the most popular players off the field — the ultimate jokester in the clubhouse who would use the same, bleeped-out phrase dozens of times a day, in anger or endearment. He liked to throw a young Prince Fielder in trash cans. He had a laugh Trammell said he'd recognize if he hadn't seen Phillips in 100 years.

"He was beautiful. That's some very sad news."

Phillips, who went to high school in Georgia, was the No. 10 overall pick by the Montreal Expos in 1978. He was traded by the Expos to the San Diego Padres to the A's in 1981, and debuted in the majors in 1982.

His Tigers career ended during the strike of 1994-95, when he was dealt to the then-California Angels for Chad Curtis.

He also played for the Angels in 1997, around a stint with the White Sox. That's when a young broadcaster named Mario Impemba got to know a veteran player named Phillips.

"He treated me like I had been in the big leagues for 20 years," Impemba said.

The Tigers released a statement Friday, saying, "The Detroit Tigers were saddened to learn of the passing of Tony Phillips. Tony was an exciting player to watch and became a fan favorite during his years in Detroit. The Tigers organization extends our deepest sympathies to Tony’s family.”

Phillips also played briefly with the Toronto Blue Jays and New York Mets, before finishing his career back with the A's in 1999.

His major-league career, anyway. He was planning to mount an independent-league comeback just last year.

Phillips was caught with cocaine in the 1990s, and was put on a rehab program by Major League Baseball. Reportedly, he completed the program drug-free.

"Tony is one of the guys I loved playing with," said Heath, who recalled an odd mid-summer Halloween party during his A's days — Phillips went as the Lone Ranger, mask and all, and was teased mercilessly about if that's how he showed up to collect his paychecks. "He was a very good player. My heart is saddened."