Hmm, the spring training camps are open, and down in Florida the Tigers might as well raise their arms in surrender.

A long line of coaches with decades upon decades of baseball experience, as a group, stand in the outfield. Robin Buckson, Detroit News
Fullscreen

Hmm, the spring training camps are open, and down in Florida the Tigers might as well raise their arms in surrender. Just hoist a white sheet on the flagpole at Joker Marchant Stadium.

Why bother playing the 2016 baseball season?

The Tigers are doomed.

PECOTA has it all mapped out for us. A jigger crammed with statistics, blended with some magical insight – and presto, PECOTA has the Tigers scraping near the baseball bottom.

Plus USA Today, with its regular journalistic brilliance, supports PECOTA’s gloomy outlook with an investigation all its own.

All the pre-preseason projections are negative.

For the Tigers, expect 162 reruns of the 2015 drop-into-last-place follies.

Not that the preseason guesswork matters much. The game is evaporating. It has turned to trash, according to information from the highest circles.

The still-new commissioner of baseball indicates that America is bored with baseball.

What’s-his-name? Bud, no; Rob – Rob Manfred -- is looking for bright ideas to spruce up a stale product. Rob is searching for gimmicks that would enchant and entice sports devotees below the age of 62.

Meanwhile, the sabermetricians WARn that Mike Ilitch has been wasting his money in the convincing Jordan Zimmermann and Justin Upton to frolic now in the Olde English D. A better investment might have been a time machine for Justin Verlander.

But it is PECOTA that attracts much national attention from baseball aficionados.

PECOTA takes the pulse of every Major League player and how many games each guy ought to play and how he ought to do. Then it mixes all its stuff up with self-adoring wizardry and determines the October standings.

For example, PECOTA – which was devised by Baseball Prospectus – has the Tigers set to finish fourth in the American League Central.

That jibes with what has been dribbled out of USA Today’s crystal ball.

But there is a mighty difference.

USA Today projects the White Sox as the AL Central winner. PECOTA, slithering through the sabermetric goo, awards the first-place finish to the Indians.

Not only is PECOTA proclaiming that the Indians will the division, this outlet of savvy baseball projections has the Indians winning in a runaway. Cleveland is destined to hit the postseason with a 92-70 record – with a 10-game advantage over the White Sox.

The Twins are going to finish third in PECOTA’s mindset with the Tigers in fourth, with a 78-84 record. That likely would fry Brad Ausmus’ biscuit.

And oops, one team is missing. Oh, the Royals! Where did PECOTA position the Royals in their own homey division for 2016?

Fifth place. Last. In the dungeon.

Of course, where else would the sabermetric geniuses place the reigning world champions -- World Series players the past two seasons?

This is an example of logic, I suppose.

And PECOTA does have a track record for such figuring.

One year ago, this month, PECOTA came out with is projections for the 2015 season.

The Tigers, this outlet figured, would finish again in first place in their division at 82-80.

The Royals were not designated for last a year ago. PECOTA boiled down all its numbers and determined the Royals would finish fourth – with a 72-90 record.

That after the Royals had survived to a seventh game in the 2014 World Series and ultimately dying with a tying baserunner on third against the Giants. 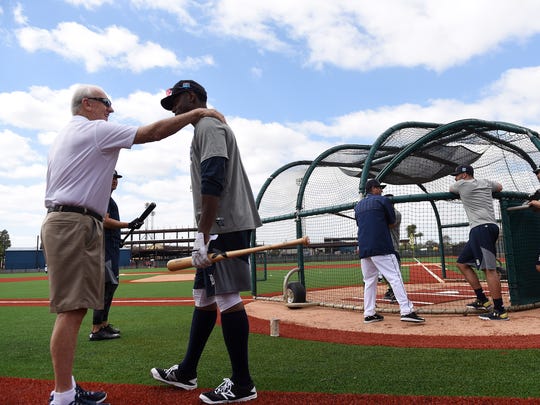 For those who join me in the previously uninformed, I reckon that is the translation from the Latin. Dunno for sure, never did grasp Latin.

But what I do grasp is Manfred’s concerns about baseball.

He puts it into a nutshell.

Baseball is an old fogeys’ sport. It has become dull, it has become boring, it has veered away from the American masses.

A serious problem, Manfred theorizes, is that fewer kids nowadays play baseball. Thus, fewer grow up as baseball fans. Translate the label “fans” to “consumers,” and there is trouble in big league cities.

Stats show since 2000, youth participation in baseball and softball has plummeted by 40 percent, figures proclaimed by the pros at USA Today.  That is a very dangerous drop for what once was considered our American national pastime.

More dreary stats emanating from USA Today show that 56 was the median age of viewers hooked on watching baseball on television during the 2015 season.

Some of the brainstorm ideas popping from the commissioner’s inner sanctum, as reported in USA Today, include:

* Start every inning with a runner on first base.

* Start each inning with a different count.

* Eliminate the three-outs-and-inning’s-over rule and send up five batters per inning.

* Require all baserunners to steal.

This was reported as serious stuff to boost baseball participation among youngsters and thus, develop more fans with more bucks younger than 56.

“The games in San Francisco don’t look like a typical baseball crowd,” Manfred was quoted as saying. “Really, we’d like to see young audiences like that everywhere.”

Yep, top of the third starts with a runner on first, ready to take off, while the first of the five batters step to the plate with a 3-and-1 count.

And to think, Manfred’s predecessor rankled this ancient purist with his obsession on piling up more wild-card teams for our TV pleasure in October.