“My fingers were going freezing cold and turning black and blue,” the Tigers right-hander said Sunday. “It wasn’t necessarily that I couldn’t feel the ball. It was every time the ball would come off my fingers, it was stinging really bad.

“It would be like having really cold toes and then stomping your toes. It’s the only way I can describe it. It was just a freak thing.”

Greene was eventually diagnosed with an aneurysm in his shoulder. The aneurysm, a weakening of the blood vessels, led to the formation of blood clots that moved down his arm and into his fingers.

But he didn’t know that as his season was crumbling right in front of his eyes. After winning his first three starts for the Tigers, he gave up 20 runs in 11 innings over his next three starts and eventually was sent back to Triple-A.

“Nobody really had any answers,” he said. “I didn’t have any pain except for cold fingers, so being a competitor, I just (decided) I’m going to go and compete until they tell me I can’t anymore.

“And it just became an issue where all I could think about are my fingers. So that’s when I said enough is enough.”

The aneurysm was surgically repaired but it’s going to take some time for the blood clots to dissipate.

“It’s been a pretty slow process,” he said. “Like when I first started throwing, the coldness was still pretty bad, because the surgery wasn’t on my fingers, it was on my shoulder -- so my body is taking the blood clots out in time. And there’s no way to tell how long before it is going to be 100 percent.

“So right off the bat, they were still pretty cold. But now that I’ve gotten going and it’s a little while after surgery, they’re feeling pretty good.”

If his early bullpen sessions are any indication, his arm is back on track.

“As far as pitching goes, I’m perfect,” he said. “I’m probably a little bit ahead of schedule, to be honest. But the body’s dealing with the blood clots, and there’s no telling. It could be tomorrow, it could be 10 years from now when they’re 100 percent.

Manager Braud Ausmus said one of the goals this spring is to identify one or two long relievers. He listed off some candidates.

“Blaine Hardy was a starter before he came here and he’s a four-pitch guy,” he said. “Alex Wilson showed he could do that last year and Drew VerHagen was a starter before, too. Shane Greene has the ability to be a starter, a long reliever or a short reliever. So there are some options.”

… Outfielder Steven Moya arrived at camp Sunday and put on quite a power show in batting practice.

“Every time I see him I realize how big of a human being he is,” Ausmus said of Moya, who is 6-7 and 260 pounds. “He’s looks big and strong. Put a cape on him and he'd look like a superhero.”

… The subject of pitchers having swing-and-miss pitches came up and Ausmus reached into his top drawer and pulled out a chart.

“Did you know that the fastball is the lowest swing-and-miss pitch in baseball?” he said.

Tigers pitcher Buck Farmer puts his arm around Angel Nesbitt, left, while they walk away from the clubhouse at Detroit Tigers spring training workout day at the practice fields at Joker Marchant Stadium in Lakeland, Fla., on Feb. 21, 2016. Robin Buckson, Detroit News
Fullscreen

Tigers pitcher Shane Greene, right, plays with a ball while he and Bobby Parnell wait for their turn during a drill. Robin Buckson, Detroit News
Fullscreen

Tigers pitcher Shane Greene looks towards home during a drill to practice stepping off the mound and checking the baserunner. Robin Buckson, Detroit News
Fullscreen 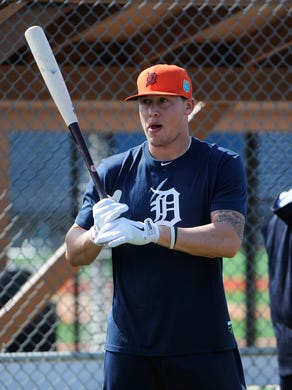 Tigers pitcher Kyle Ryan wonders why no one threw him the ball while he was covering second during a drill for pitchers to practice stepping off the mound and checking the runner or trying for a pickoff. Robin Buckson, Detroit News
Fullscreen

Tigers pitcher Shane Greene looks towards second base during a drill for pitchers to practice stepping off the mound to check the runner or try for a pickoff. Robin Buckson, Detroit News
Fullscreen