V-Mart: This might be best Tigers team I’ve been on 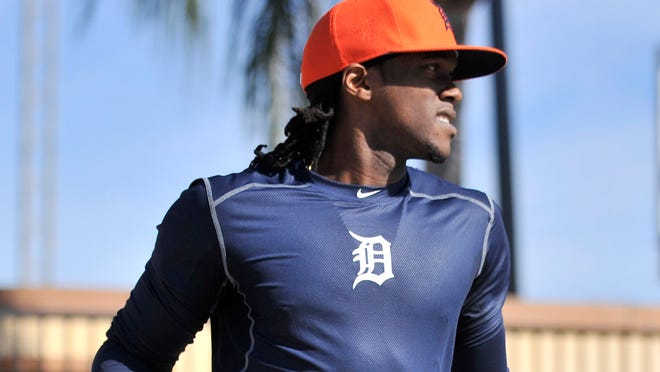 Lakeland, Fla. – He had already got in an early workout and taken at least 50 swings from each side of the plate in the batting cage well before 9 a.m. Monday. Not bad for what was technically the last off day of the spring for position players.

“I feel really good,” said Victor Martinez, with a smile that accentuated his point. “I am happy to get everything started. And being back healthy, it’s been a while. It definitely feels great, man, getting back with your teammates and having fun.”

At this time last year Martinez was just three weeks removed from surgery on his left meniscus. He and Miguel Cabrera (coming off foot and ankle surgery) were both working their own programs.

“It’s not fun when you are working like that,” Martinez said. “Now I am able to do everything I need to get ready for the season.”

That left knee never fully recovered last season and Martinez suffered through the worst year of his career. To compensate for the pain he altered his swing mechanics from both sides of the plate. But in the end, he was never able to launch off back leg from the left side of the plate or fully stride into the ball from the right side.

“I have made no excuses,” he said. “It is what it is. It was the worst year of my career. I tried, I played, whatever. But the good thing about it, it is over. It’s a brand new year. Nobody remembers what I did in 2014 (32 homers, 103 RBI). Nobody remembers what I did my whole career (.300 hitter from both sides of the plate). Everybody lives for today, day by day and game by game.

“Fortunately people forget critically what you have done. It’s always been that way. Just keep working. This game is about consistency.”

Martinez has been hitting on his own since the end of November. He said he has regained his old swing mechanics and habits.

“I can tell the difference,” he said. “It’s a lot different than last year, for sure. I can do stuff. Last year I couldn’t do anything.”

He has changed his diet a bit and tempered some of his workout habits in deference to his 37-year-old body. But his workout mentality, the general intensity of it, hasn’t changed since he was a rookie.

“I am so used to working out and having my catcher’s mentality, working out like I am still a catcher,” he said. “That’s something that helps me, just being a DH. I still try to stay in good shape.”

This is the first spring there was no new catcher’s gear in his locker. But, unlike last year, there was a first baseman’s mitt. Martinez will take some reps at first base this spring and be available whenever Cabrera needs a day off.

“This is the first time in my career I haven’t had to show up with pitchers and catchers,” he said. “It felt like I was late getting here, but I really enjoyed it.”

Martinez isn’t prone to hyperbole. He’s not a pie-in-the-sky optimist by nature. But he seems genuinely excited by the changes general manager Al Avila made to the club this offseason.

“I think this has got to be the best team I’ve been on since I’ve been here in Detroit,” said Martinez, who joined the Tigers ahead of the 2011 season.

“Adding Justin Upton is definitely a good thing,” he said. “Anytime you put a bat like that in your lineup it’s always great. But I think what helps us more is the job they did in the bullpen. It’s no secret (that’s where the team has struggled).”

The key, he said, will be learning the hard lessons taught in 2015.

“I always say, we don’t win games on paper,” he said. “We’ve got to go out and play the game. Nothing is given in this game; I think a lot of guys realize that now. But I think we are definitely looking pretty sharp.”