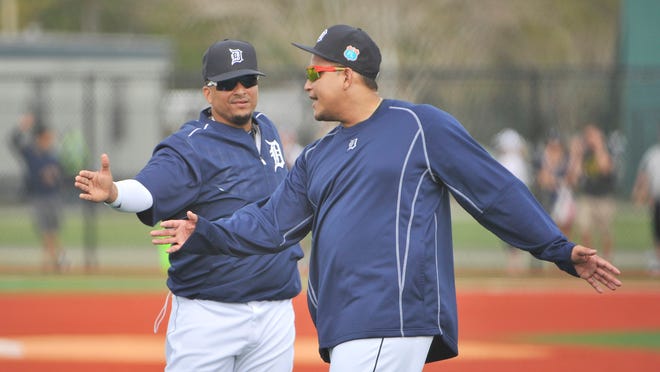 Lakeland, Fla. – It was Christmas Day and Miguel Cabrera’s cell was blowing up. It was J.D. Martinez texting him from the Miami-area gym where they both work out in the offseason.

“Christmas Day!” Cabrera said Tuesday. “He text me, ‘Where you at?’ I’m like, man, I got kids, it’s Christmas, what do you think?”

Two things to take from this: One, Martinez clearly has no kids and isn’t beholden to any holiday schedule. And two, more importantly, that Cabrera was and had been working out that early in the offseason.

“This is the first time in three years I’ve worked out normally,” he said. “It’s exciting to me. I am able to get my legs in shape. I am trying to get strong for the season.”

Cabrera has set one personal goal for himself this year: “Play 160 games. That’s my goal. I want to play every day.”

Cabrera, coming off foot and ankle surgery following the 2014 season, missed 43 games last year. For perspective, from 2008 through 2011, he missed just 15 games.

“The mindset is just to be healthy,” he said. “We had too many (players) down last year. We had a lot of key players going on the DL. The goal is stay healthy and compete every day. ... We’ve got a team, we just need to be on the field. If we can stay on the field it will make a lot of difference.”

Manager Brad Ausmus would love for Cabrera to achieve his goal of 160 games, but it’s not going to happen.

Kinsler bent on chasing the butterflies, bad taste from 2015

“There are going to be times when we have to rest him,” Ausmus said. “I know people think players should play 162 games because of the money they make, but you want to get the most out of them. And getting the most out of them sometimes involves giving them an off day.”

Cabrera won his fourth batting title last season – how’s that for having a down year? His power numbers, though, were down (18 homers and 76 RBI), largely, he believes, because he lost strength in his legs.

“I’ve been able to run this offseason,” he said. “I am good condition. I was able to work outside and do everything they asked me to do to try and strengthen my legs.”

“It feels different, yeah, for sure,” he said. “I can use my back leg more. I can stay back and drive through the ball. It’s good.”

Cabrera praised the offseason efforts of general manager Al Avila and recalled that it was back in 1999, when Cabrera was 16, that Avila signed him to a professional contract.

“Back in the day I said, “Al, sign me, please,’” he laughed. “Now it’s like, unbelievable. The first time he sees me he signs me and now he is GM. It’s amazing we are still here. Now we want to win a World Series together.”

Cabrera spent part of his offseason on an MLB-sponsored goodwill tour of Cuba. While there he spent time counseling one of its troubled countrymen, the Dodgers’ Yasiel Puig.

Cabrera said Puig, whose antics and immaturity have made him a polarizing figure in Los Angeles, wanted to pick his brain on how to keep focused through a long season.

“Just play and compete every day and try to stay even.”

Moya shuts out the noise when hitting: �I just let it go�

Cabrera has worked out with Puig in the offseason for a couple of years.

“He is a very strong man,” Cabrera said. “A very athletic man.”

Asked if Puig was stronger than another physically-gifted Cuban, Yoenis Cespedes, Cabrera said, “Yeah, but Puig is bigger, more mass. Cespedes, though, wow.”