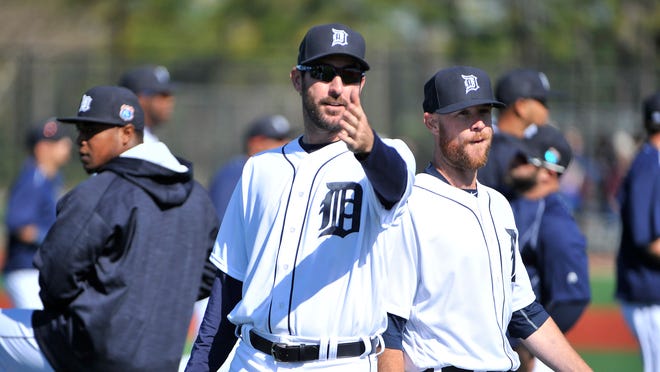 Lakeland, Fla. – Some pitchers truly don’t care if they start or work out of the bullpen. Michael Fulmer is one of those guys.

“Whatever they need me to do,” he said. “I have to get guys out regardless of when I pitch.”

Kyle Ryan has toggled between starting and relieving but he has made it clear he prefers to come out of the bullpen.

“I’m an adrenaline junkie,” he said last year. “I love coming out of the bullpen. The atmosphere of 40,000 fans yelling and screaming on top of you. It just, it gets my heart going.”

Buck Farmer wants to start. He will do whatever it takes to make the club, but in his heart, he is a starting pitcher. And it appears, at least for the early part of spring training, he is in the hunt for the fifth starting spot with Daniel Norris, Matt Boyd and Shane Greene.

He will get the start Wednesday in a split-squad game against the Pirates in Bradenton.

Farmer to this point has been a cautionary tale of sorts for the Tigers, an example of why you don’t rush players to the big leagues. Farmer was drafted by the Tigers in 2013, pitched in 13 games for Low-A Connecticut that year and by the end of 2014, made his debut for the Tigers.

Sliding rules put onus on runner to stay within bag

All told, he had made just 18 starts for Class-A West Michigan, two for Double-A Erie and two for Triple-A Toledo that year before getting called up.

He wasn’t ready, as his 0-5 record, 8.15 ERA and 1.752 WHIP in 18 Major League games the last two years would attest. Farmer essentially had to rely on his 93-mph fastball and changeup against left-handed hitters, and fastball and slider against right-handers.

The rest of his repertoire was undeveloped.

Something had to change, and it has. Farmer has added a cutter and a curveball to his arsenal.

“I had to have something I could get inside on lefties,” he said. “All they really had to look for was the fastball and changeup. I’ve also got back to throwing a curveball. I threw one in college (Georgia Tech) and a little bit my first year.”

The cutter, besides darting in on left-handers, gives him something that moves away from right-handers with a little more speed than his slider.

“It’s actually working out very well,” Farmer said. “I am still playing around with stuff as far as finding a grip that’s comfortable and arm angle, but it’s a pitch I enjoy throwing.”

Manager Brad Ausmus hasn’t seen Farmer’s cutter yet, but that’s not what he’s looking for from him.

“A cutter is one way of getting in on lefties,” he said. “But quite frankly, I think you have to have the ability to throw inside with the fastball.”

Farmer understands. It’s a matter of him trusting his stuff, trusting that he can work the inside part of the plate and jam left-handers without getting hurt. Thus far, he hasn’t accumulated enough positive results to have that confidence.

That’s what this spring is about for him. He’s had his baptism under fire. He’s added pitches to his tool box. By all rights, this should be the first spring that he legitimately has a shot at getting to the big leagues, the first spring where he’s fully prepared to pitch at that level.

That’s not how it went. The pitching depth grew thin, the club got desperate and Farmer went from Low-A to the big leagues in five months. But the experience, he said, didn’t ruin him, it made him stronger.

“Absolutely,” he said. “It helped me prepare more and it helped me know what to expect. I feel like I am ready to go.”