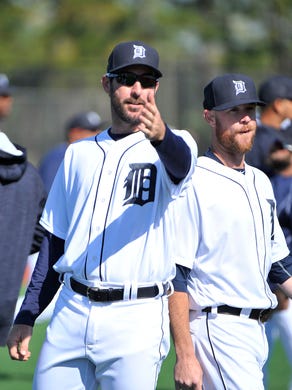 Pitcher Justin Verlander explains to the strength and conditioning coaches that he was actually not that late to warm-ups at Detroit Tigers spring training on the practice fields at Joker Marchant Stadium in Lakeland, Fla. on Feb. 27, 2016. Robin Buckson, Detroit News
Fullscreen

Catcher Jarrod Saltalamachia hands a signed ball back to Kendall Kulcher, 5, of Lakeland with her father, Kent Kulcher after the workout. Robin Buckson, Detroit News
Fullscreen

Manager Brad Ausmus talks with Victor Martinez at first base during practice on shifting the infield Saturday in Lakeland.(Photo: Robin Buckson, Detroit News)

Lakeland, Fla. – Spend a few days at big-league spring camp, any camp. And prepare to be impressed.

And then it’s April. And maybe as quickly as Opening Day, all the innocence and songbird glee is gone. Because baseball is difficult. And losing is inevitable.

Reality was woven into Brad Ausmus’ words following Saturday’s workout at Tigertown. The Tigers manager was asked if he could detect anything, even the faintest of gut feelings, about his team 10 days into spring rehearsals.

“Too early to put stock in anything,” Ausmus said after the Tigers had wrapped up three hours of drills. “A team shows its true colors when things aren’t going well.

“In spring training, it’s very easy to be relaxed.” Ausmus naturally figures he can get a better bead on pitchers and hitters when Grapefruit League games begin, which in the Tigers’ case is Tuesday against the Pirates at Marchant Stadium.

Even then, spring training can deceive. Hitters who aren’t good long-term bets can get hot. Veterans can take a while to get unhinged. Starting pitchers might get rocked because they’re working on a particular pitch.

It is wise and necessary to be careful, very careful, about assessing teams and players during February-March tune-ups.

Ausmus said Saturday he would trust his chiefs and tribal elders to help modulate the Tigers’ emotions and anxieties. Victor Martinez, Ian Kinsler, Miguel Cabrera, Justin Verlander – these are the clubhouse psychologists who can be important in keeping a team’s head straight.

“It’s a little like Reaganomics,” said Ausmus, resurrecting an economic philosophy from the 1980s. “It’s trickle-down. If you have good veterans, it’s trickle down.”

Of course, you can have a clubhouse full of veterans on hand and find, to take his economic metaphor a step further, a team is in a genuine Depression. That’s what the Tigers ran into late last summer after David Price, Yoenis Cespedes, and Joakim Soria had been dealt once the team’s playoff picture turned bleak.

Too often, they couldn’t compete. The Tigers were outmanned and out-muscled. They finished in last place. Even with Kinsler and Martinez and others working overtime alongside Ausmus to prop up players’ psyches, the team was simply no match for opponents.

“Credit to Kins (Kinsler) and Victor,” Ausmus said. “They were on it (the misery of losing) 100 percent. But they (players, particularly veterans) want to win. Losing stinks. They didn’t like it. Harbaugh will coach first base for Tigers in Florida

He’s right. A losing clubhouse is a somber clubhouse. But on the field a team’s soul stayed intact.

In fact, a couple of visiting scouts said during confidential press-box conversations last August and September that they were surprised how hard the Tigers played even after the deadline trades and the white flag had been raised.

Those dispiriting weeks from 2015 are in deep contrast to what you see this month in Lakeland. Roster repairs have been extensive. There is more quality depth than the team seemingly has brought to camp in years.

And so, once again, during that blissful interlude known as spring training, baseball is never better. Because there haven’t been any defeats, none that matter. And because everyone looks good and strong and as such a noble match for that most humbling of games.

About the Tigers’ rotation

It’s easy to put a number designation on Detroit’s 2016 starters. You begin with Justin Verlander as top dog. Hotshot newcomer Jordan Zimmermann is the team’s acknowledged No. 2 man. Anibal Sanchez, as long as he’s healthy, is No. 3.

A slightly different list is in place here. That it runs against the grain, and against a likely order Ausmus will unveil in April, is acknowledged. But strictly because of his talent and the fact the Tigers need a left-handed starter as close as possible to the top or mid-region of their rotation, it has been too tempting to think of Norris as the No. 4 guy, with Pelfrey in the fifth slot.

This order is all but certain to be reversed, mostly because the Tigers will want to keep Norris’ innings in check in 2016. But in terms of potency and potential, Norris gets a nod here as a pitcher who not only is all but locked into a slot, but as a pitcher who could soon be viewed as one of the better bets in Detroit’s starting five to give the Tigers a quality start and an edge in any single game.