Tigers claw back but fall short to Royals in opener 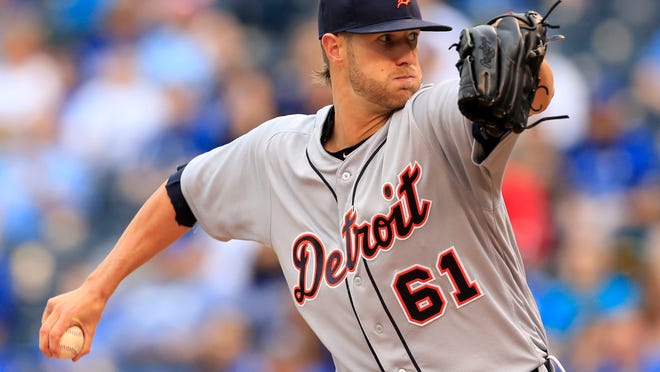 Kansas City, Mo. — Pluckiness and fortitude are admirable traits, and the Tigers have demonstrated an abundant amount of both through the early weeks of the season.

But five-run leads, more often than not, will trump pluck and grit.

“We’re not out of it; we’re never out of it,” manager Brad Aumsus said. “It’s not really the recipe or the plan to come back all the time. But they never stop fighting.”

The Royals drew first blood in this three-game series at Kauffman Stadium — winning 8-6.

“We’re fighting back but we’re not quite getting there,” said catcher Jarrod Saltalamacchia, whose three-run home run in the seventh inning off reliever Danny Duffy cut it to 8-5. “We’re not quitting and that’s what you want.”

Saltalamacchia’s homer, his third in three games and fifth on the season, set the stage for a dramatic eighth inning and a powerhouse showdown between the Royals All-Star setup man Kelvin Herrera and Miguel Cabrera.

The Tigers loaded the bases against their former teammate Joakim Soria with singles by Jose Iglesias and Ian Kinsler, and a walk to Justin Upton. With one out, Herrera was summoned to face Cabrera.

It had already been a rough night for the reigning American League batting champ. He struck out three times in the game to that point. Twice against starter Yordano Ventura, who fed him a steady diet of change-ups. Cabrera also hit a two-run double off a Ventura fastball in the fifth.

Herrera, one of the most fearsome setup men in baseball, has a fastball that often hits 100 mph. But all Cabrera saw was sliders — 81, 82 and 81 mph. He swung and missed on each one.

“Hitters like Miggy get pitched like that a lot because of the nature of who they are,” Ausmus said. “You don’t keep pumping heaters to Triple Crown winners. That’ll cost you.”

Cabrera, who also struck out with the bases loaded with one out in the third, is hitting .255 with a homer, six RBIs and 13 strikeouts this season. He is 6-for-25 on this road trip.

“We’re so used to seeing him roll. When he’s not hitting three-something, .320 or .330, it seems like something’s wrong,” Ausmus said. “The truth is, it’s just the part of the season. The numbers on the scoreboard early on are more pronounced, and you think he’s off to a bad start.

“If this happened in July, you wouldn’t even notice. It’d be a blip on the radar. This is not a trend, it’s an off night. Everyone has off nights.”

The Tigers managed to salvage a run in that eighth inning when Herrera hit Victor Martinez in the right kneecap. He writhed in pain but ultimately walked to first base. He was removed as a precaution and he said afterward he expected to play Wednesday.

That left it up to J.D. Martinez, who flew out to end the threat.

Closer Wade Davis, who hasn’t been scored on all year, closed it out for his sixth save.

The Royals offense was led by catcher Salvador Perez. He matched in this one game his home run (one) and RBI (five) totals for the season.

Shane Green took most of the punches. He allowed seven runs on six hits with four walks in 4.1 innings. Saltalamacchia said Greene may have been trying to be too fine with his pitches.

“We go over scouting reports and we know what kind of team they are,” Saltalamacchia said. “We don’t want to give in and throw too many over the middle of the plate. We might’ve nit-picked a little bit, trying to hit corners and make the perfect pitch.

“With his stuff, you don’t really have to.”

The walks and a hit batsman hastened Greene’s demise, but it was a misplay at home plate in the second inning that got the Royals off and running.

With two outs, Jarrod Dyson singled to left. Kendrys Morales tested the arm of left fielder Justin Upton and lost. The throw, which had had Morales dead to rights, hopped over Saltalamacchia’s glove.

“It definitely took a weird hop,” Saltalamacchia said. “You are taught to stay down, stay low. It’s like it hit the dirt and bounced over my head. Obviously, you want to make that play and nine out of ten times you do. I am frustrated I wasn’t able to grab onto it.”

Instead of being out of the inning, the Royals were on the board and Greene had runners on second and third. Both scored on a single by Alcides Escobar.