Detroit Tigers management, coaches and players at the annual Tigers meeting at the Detroit Economic Club at the Motor City Casino.

Detroit — There is no sugar coating it, not even at a fun gig like the Tigers’ annual appearance before the Detroit Economic Club.

As Marian Ilitch, the wife of the owner Mike, sometime says, the difference between sport and business is the scoreboard: Your performance is posted publicly, immediately as it occurs, for thousands to see at the stadium and millions more at home.

And, six revealing weeks into the season, the Tigers know the score.

But that did not prevent a lot of applause for them from about 1,100 people who attended at the Motor City Casino.

“Well, we do feel that we have a very good ball club.” general manager Al Avila said. “I think we see we have guys who are not selfish players, who do everything for the team.

“Right now, we’re very disappointed. We don’t like the outcome, so far.

“But we know that we’re going on the right track, and with just a few minor adjustments we should be able to turn this around in not too long down the road,” Avila said.

Rod Allen of Fox Sports Detroit asked Brad Ausmus what a manager does when things are not going well, and whether there is wisdom in simply staying the course and letting major league players work through their difficulties.

“You know, for the most part, you do stay the course, unless there’s an issue,” Ausmus said. “If there is an issue with the effort, guys are not coming in and getting their work, guys aren’t concentrating when they’re on the field.

“And when this team is put together, you think six months,” he said. “How is the team going to do over six months?”

Ausmus talked about having played on some bad teams, and that the 2005 Astros club that went 15-30 and made the World Series.

“So, you do have to keep the long picture. As much as you want to win on a daily basis, you can’t let the loss on a particular day change the direction for tomorrow,” Ausmus said. 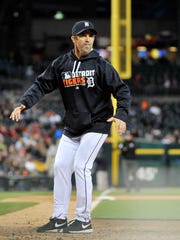 After being ejected, Tigers manager Brad Ausmus has words with home plate umpire and kicks the dirt near home plate in the fifth inning. (Photo: Robin Buckson, Detroit News)

There was some fun, too, and befitting of ballplayers, not shortage of deprecating humor.

As Allen began to ask Ausmus his first question of the event, the broadcaster interrupted himself to reference Ausmus’ dramatic ejection Monday, in the 10-8 victory against the Twins.

“Question for you skipper — how are you doing today, by the way?” Allen said.

“I’m doing great,” Ausmus said, smiling wryly and rising to the occasion, as the audience began to laugh.

“I’m feeling good — just a little cleansing,” said the manager, who has acknowledged he might be fired given the Tigers’ lagging performance.

Amid his tirade Monday, which occurred as the Tigers were blowing an eight-run lead and seemed to steel the team, Ausmus pulled off his hoodie and covered home plate with it.

A person in the audience was curious if Ausmus ever got his clothes back, after the ejection.

Ausmus, a major league catcher for 18 years, said Jarrod Saltalamacchia brought it to him in the clubhouse.

Questioned about the lineup and decision to bat J.D. Martinez second, Ausmus was interrupted by his big first baseman, whose presence looms large even in a grand ballroom full of a thousand people.

Miguel Cabrera piped up and declared that he wanted to hit second.

Ausmus did not miss a beat, and the audience laughed and applauded when he deadpanned and said: “I was going to hit you second. But Victor (Martinez) said you couldn’t score from first on a double!”