Fulmer gives Rays peek at his X-factor — the change-up

The rookie right-hander threw first-pitch strikes to 18 of 25 hitters.

Fulmer gives Rays peek at his X-factor — the change-up

Kevin Kiermaier of the Tampa Bay Rays reacts after injuring his left arm making a diving attempt on a fly ball hit by James McCann of the Detroit Tigers during the fifth inning. Duane Burleson, Getty Images
Fullscreen 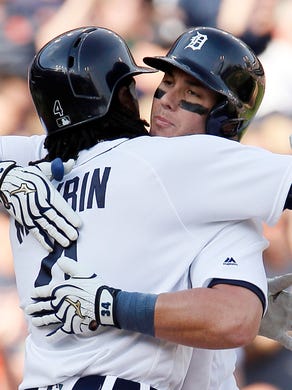 Detroit Tigers' Cameron Maybin throws down his bat after striking out during the ninth inning Carlos Osorio, Associated Press
Fullscreen

Detroit — Rookie Michael Fulmer isn’t really a numbers guy. The only stat he was concerned with after his first four starts was that the team was 3-1.

But he also knew the numbers attached specifically to him would have to improve if wanted to pass this early season audition with the big club.

He proved that Saturday, pitching seven strong innings, allowing four hits and a run while striking out a career-best 11. He left his first ever start at Comerica Park to a standing ovation.

“Yeah, I got the chills coming off the mound in the seventh, with all the fans on their feet and stuff,” he said. “I’m blessed and I’m honored to finally pitch at home.”

The turnaround start was the byproduct of some grueling work since his last start in Baltimore. His between-starts bullpen session was a long one. Some 20 pitches longer than usual. The reason it went longer was because he spent extra time trying to refine and get comfortable with his third-best pitch — a change-up.

“You've got to give him credit,” catcher James McCann said. “That pitch is mostly for his future, giving him a third pitch. He can't survive on a fastball and slider. Players will make an adjustment. This is a third dimension to his repertoire.”

It turned out to be Fulmer’s X-factor against the Rays Saturday.

“His fastball command was exceptional,” manager Brad Ausmus said. “But the change-up was by far the best it’s been. And he threw a number of them. It really helped him against left-handed hitters, and he used it against right-handers, too. That pitch is going to be enormous for him.”

He said his primary mission coming in was to pound the strike zone early and often. Throw strike one, get ahead of hitters and then mix in his slider and change-up.

Fulmer threw first-pitch strikes to 18 of 25 hitters. His fastball was as lively as it’s been all season, clocking 95-98 on the radar gun, and he was able to throw it up in the zone for strikes as well as with sinking action when he wanted.

That made his slider and change-up almost unfair. He got five of his 11 strikeouts with the either the change-up or slider.

McCann made the change-up a priority right from the start.

“It's something we really wanted to use today,” he said. “I told him early on we were going to use it and let you get a feel for it. He got a feel for it from the second batter on. The first one he threw he had a good feel for it.”

McCann made several visits to the mound, each time patiently explaining his reasoning for calling the pitch he was calling. Fulmer never fought him on any decision. As he said, “Just nodded and tried to execute the pitch.”

Said McCann: “The great thing about (Fulmer), he's a sponge. Sometimes you get guys with big-time talent like he's got and they think they've got it figured out and don't want any help.

“He's the exact opposite. He wants to learn from anyone who has experience and who can help him.”

The only blemish on the day was a sixth inning homer by Evan Longoria, which came on an 0-1 fastball after he had struck out Brandon Guyer and Brad Miller. It sounded like Fulmer broke Longoria’s bat on the pitch, and he still muscled it over the left field wall.

“That’s the first thing I asked Mac when we came back in the dugout,” Fulmer said. “I thought he did (break his bat), but I guess he’s got some man-power that I don’t know about.”

Ausmus wasn’t biting on questions about keeping Fulmer in the rotation. Presently he is filling in while Shane Greene works his way off the disabled list. Greene likely has two more rehab starts still to make.

“That’s a decision we will make when it’s time,” Ausmus said. “A lot of things can change between now and then.”

Fulmer likely has at least two more showcase starts, but that’s not his focus.

“I just go out and pitch whenever they tell me,” he said. “As long as I’m healthy, I’m happy, and I’ll do anything to help the team, no matter what.”