There is a pair of baseball spikes in Francisco Rodriguez’s locker with the number 400 stenciled on each shoe. 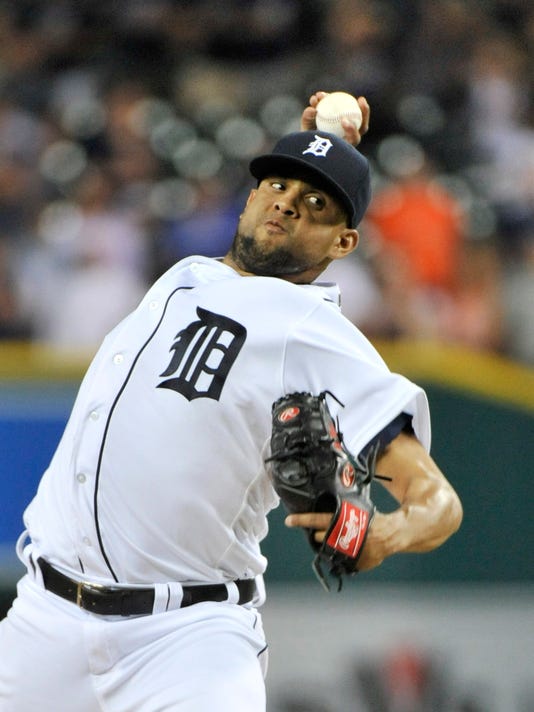 Tigers pitcher Francisco Rodriguez throws the final pitch of the game for a strikeout of the Phillies' Carlos Ruiz to end the game.(Photo: Robin Buckson, Detroit News)

Detroit – Before the game, the shoes, a pair of baseball spikes with the Venezuelan flag on the top and the number 400 scripted on back and sides, where sitting in Francisco Rodriguez’s locker.

Mike Pelfrey and Shane Greene were jokingly trying to get Rodriguez to wear them Tuesday. They were trying to convince him, once he recorded the final out, to take them off on the mound and light them on fire.

It didn’t quite happen that way, mercifully. But after the game, after Rodriguez had recorded his 14th consecutive save of the season in the Tigers 3-1 win over the Phillies and gained membership into the exclusive 400 save club, he wore those shoes proudly on his feet as he walked through the clubhouse.

“It means a lot, for sure,” an emotional Rodriguez said. “Just have to take it in, enjoy. Just the fact that only six people have done it. It’s special for me, and my family.

“I’m not planning to stop, either.”

“It means he’s been pretty good at his job for a very long time,” said manager Brad Ausmus, who caught three of those club members during his playing days (Hoffman, Wagner and Franco). “That’s a short list of people who put up 400 in the save category. It’s a testament not only to his ability, but to his longevity.”

The feat was unimaginable to Rodriguez when he broke into the big leagues, armed with an upper-90s fastball and little else.

“When I came here to the States, and I came up to the big leagues, I was just a little kid with a lot of dreams,” he said. “But, never … never even crossed my mind that 10, 12, 15 years later you’re going to be able to accomplish 400 saves. You never expected that.”

Rodriguez gave up a leadoff double to Freddie Galvis and then a single to Maikel Franco in the ninth Tuesday. But he got the next three hitters quickly to close it out. He threw a fist-pump and then raised his hand to the sky.

“I don’t know if I cried, screamed, laughed,” he said. “A lot of things going through my mind in the moment. And I’m still trying to soak it in, enjoy.”

He stopped himself, though.

“One thing I want to make clear: I don’t play this game for the numbers,” he said. “I play this game because I love it. I’ve got it in my veins, and it’s, honestly, the only thing I know how to do well.

“So, this has nothing to do with records, or anything like that.”

Justin Verlander, whose victory Rodriguez saved, offered a tip of his cap.

“Really special,” he said. “Unfortunately, I’ve seen a lot of those saves on the other side of the dugout. It’s nice to see him saving games for us. What a special moment.”

James McCann, who caught save No. 399 Monday night, agreed.

“It’s really impressive, what’s he done,” McCann said. “He’s really been two different pitchers over the course of his career. He used to be a guy who threw in the mid- to upper-90s. So the fact that he’s found a way, for that lack of a better word, to reinvent himself and have success is incredible.”

For Ausmus, Rodriguez’s presence at the back end of the bullpen has provided an unaccustomed sense of calm late in close games.

“There’s more confidence with the way things have been going with K-Rod now than probably at any point since I’ve been here,” he said.

If No. 400 wasn’t a clean representation of the typical Rodriguez save, Monday night’s certainly was.

“He’s very talented,” McCann said. “Just, you look at his stuff. How many closers are there in the game throwing 82 mph change-ups off 89 mph fastballs?”

It was a quick, non-dramatic, three-up, three-down save – on the surface. He got three struggling hitters out – Andres Blanco, David Lough and Cesar Hernandez.

But lurking, with the Tigers clinging to a 5-4 lead, was the ever-dangerous Maikel Franco, who already homered in the game and would bat if one runner reached.

Rodriguez didn’t let that happen. He disposed of the three hitters quickly and efficiently, expertly mixing his multitude of change-ups off well-positioned fastballs, striking out two of them.

“In order to make the (change-up) effective, you have to locate the fastball,” Rodriguez said. “That's what I've been able to do. I throw the first strike and now I can make the same pitch I want them to swing at.

“Early in the year I had no control of the change-up. I couldn't manipulate it where I wanted it. I couldn't take velocity off. I was all over the place. Now I can locate it and throw it like I want."

Since giving up back-to-back home runs in Kansas City on April 20, Rodriguez has allowed two runs and eight hits in his last 12 outings covering 11.1 innings. He has 12 strikeouts and two walks in that span and opponents are hitting .167 against him.

“What I’ve learned is how intelligent he is,” McCann said. “He’s one of the best I’ve ever seen at reading hitters and understand what a hitter is trying to do.”

Rodriguez freely shares his knowledge with the rest of the bullpen.

“I’ve heard stories about how he’ll come up to a guy after an outing and say, ‘You threw this pitch 2-2. Why did you throw a slider, you should have thrown a fastball there.’ So he remembers pitch sequences of other guys’ outings.

“I have learned a lot from him.”

So, now, what are you going to do with those shoes?