Michael Fulmer pitched a gem Friday night, in the Tigers' 4-1 win over the Oakland A's. 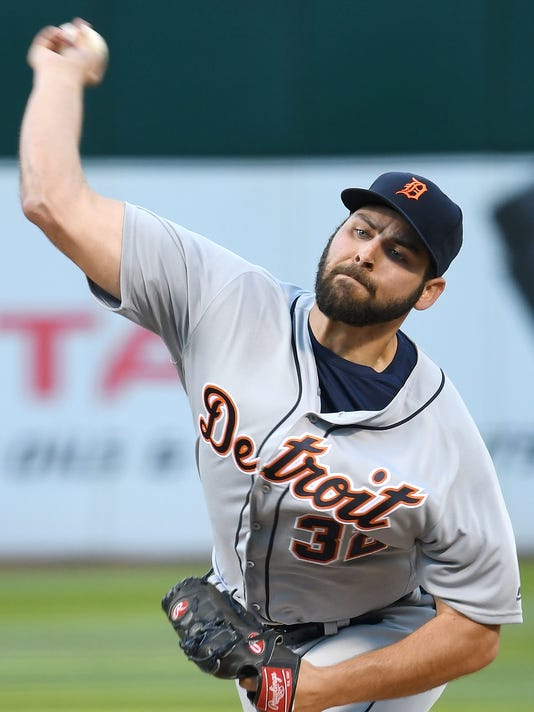 Michael Fulmer of the Tigers pitches in the bottom of the first inning.(Photo: Thearon W. Henderson, Getty Images)

Michael Fulmer pitched a gem Friday night, in the Tigers' 4-1 win over the Oakland A's.

Nick Castellanos was 2-for-4 with a home run.

With one out in the top of the ninth, Ian Kinsler collected his third hit for the Tigers. He scored on a J.D. Martinez hit, after A's right fielder Chris Coghlan misplayed the ball and lost his glove on the play, allowing Martinez to get over to third base. Going to the bottom of the ninth, the Tigers lead 4-0.

With two outs in the bottom of the eighth inning, and Tigers starter Michael Fulmer continuing to cruise, the A's offense tried to make things a little more interesting. Chris Coghlan singled, and moved to third on a ground-rule double from Coco Crisp. That was it for Fulmer, who threw an absolute gem. Left-handed reliever Justin Wilson struck out pinch-hitter Billy Butler to end the inning, and the threat. After eight, the Tigers are holding on to a 3-0 lead.

Tigers starter Michael Fulmer breezed through the seventh inning, save for only one baserunner -- Jed Lowrie was hit by a pitch with two outs. Fulmer has tossed seven shutout innings, allowing a hit, walking one and hitting a batter. After seven, the Tigers lead 3-0.

The Tigers stranded a pair of runners in the top of the seventh, including one in scoring position. After Jose Iglesias doubled to lead off the inning -- chasing A's starter Sean Manaea -- he was thrown out at third on a fielder's choice by Ian Kinsler. Two batters later, Miguel Cabrera worked a two-out walk, advancing Kinsler to second before Victor Martinez flew out to left field. Going to the bottom of the seventh, the Tigers lead 3-0.

Tigers starter Michael Fulmer allowed his second baserunner of the night -- a one-out walk to Chris Coghlan -- but stranded him on first base. After getting Coco Crisp to fly out and Billy Burns to ground out, Fulmer got to a point few Tigers starters have been able to navigate through this season. He's thrown six shutout innings, allowing a hit and issuing a walk, while only striking out one. Fulmer hasn't been overpowering the A's, instead letting his defense play behind him and the offense provide some run support. After six, the Tigers lead 3-0.

Nick Castellanos added to the Tigers' lead with a solo home run to left field on the first pitch of the sixth inning. After Justin Upton fouled out to A's first baseman Yonder Alonso, Cameron Maybin walked, but was picked off between first and second base two batters later to end the inning. After five and a half, the Tigers lead the A's 3-0.

While the end to the previous half inning may have people talking, Tigers starter Michael Fulmer clearly remains dialed in. He set the A's down in order, for the third inning in a row and the fourth time tonight. Fulmer has allowed only one hit -- a single by Khris Davis in the second inning -- in five innings, while striking out one and not walking a batter. After five, the Tigers are up 2-0.

With one out and runners at the corners, Victor Martinez popped out into what might be the most unusual double play the Tigers have seen this season. Martinez fouled out to A's first baseman Yonder Alonso, who then threw the ball back towards third base to hold Ian Kinsler -- who doubled to lead off the inning -- from tagging and scoring. Instead, the throw hit Martinez, resulting in Kinsler being called out -- ending the inning. After four and a half innings, the Tigers remain ahead 2-0.

Tigers starter Michael Fulmer continued his strong outing by retiring the A's in order for the second inning in a row. He struck out Danny Valencia swinging to end the inning, and after four the Tigers are ahead 2-0.

The Tigers got on the board in the top of the fourth inning, scoring twice on A's starter Sean Manaea. Justin Upton singled with two outs, to keep the Tigers alive. Cameron Maybin extended his hitting streak to 10 games by singling in Upton, and scored on an RBI single from James McCann. After three and a half innings, the Tigers lead 2-0.

Tigers starter Michael Fulmer appears to have found his groove in the bottom of the third inning. He set the A's down 1-2-3 for the second time in three innings, and looks to be placing his pitches well so far. The Tigers are sending Victor Martinez and Nick Castellanos -- who are each 1-for-1 -- and Justin Upton to bat in the bottom of the third, and the game is scoreless.

Ian Kinsler tripled off the wall in left field -- and a leaping Coco Crisp -- with one out in the top of the third inning for the Tigers. J.D. Martinez followed by striking out looking, while Miguel Cabrera grounded out to first baseman Yonder Alonso. Going to the bottom of the third, the game is still scoreless.

Tigers starter Michael Fulmer held the A's to one hit in the bottom of the second inning -- a single from Khris Davis with two outs. Neither offense has gained the upper hand, as yet, and after two innings the Tigers and A's are scoreless.

After Victor Martinez led off the top of the second inning with an infield single, and was moved up on a single from Nick Castellanos that bounced off of third base, the Tigers offense cooled off. Justin Upton struck out swinging, before Cameron Maybin fouled out to A's first baseman Yonder Alonso and James McCann struck out swinging. After one and a half innings, the game is scoreless.

Tigers starter Michael Fulmer equaled his counterpart Sean Manaea in the bottom of the first, retiring the A's 1-2-3. A's catcher Stephen Vogt grounded out to third baseman Nick Castellanos -- playing in short right field -- to end the inning. After one, the Tigers and A's are scoreless.

The Tigers failed to muster a hit against A's starter Sean Manaea in the top of the first inning. Ian Kinsler led off with a hard-hit ball to center field, but A's center fielder Billy Burns made a diving grab to save extra bases. Going to the bottom of the first, the game is scoreless.

How to watch: Detroit Tigers vs. Oakland A’s

The Tigers have won eight of their last 10 games to claw back into the AL Central race. They are in fourth place but only three games behind the first-place Chicago White Sox.

Michael Fulmer will make his sixth start. Fulmer is developing his repertoire, as Lynn Henning reports, and it’s paying dividends for a Tigers team that hopes to make it back to the postseason after missing out in 2015.

After three games in Oakland the Tigers will play three against the Angels starting Monday night.