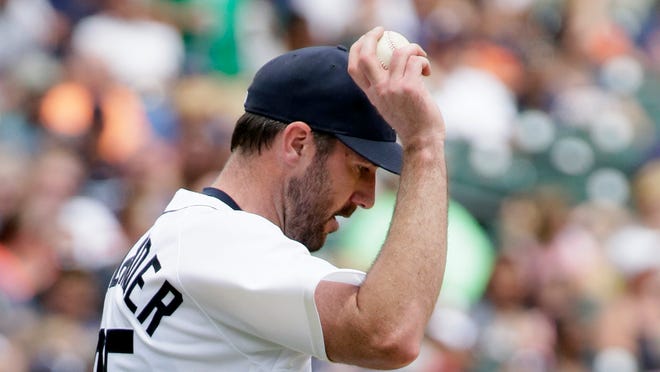 Swept at home by the American League Central-leading Indians, losing the finale Sunday 9-3 after ace Justin Verlander was tattooed for four home runs in the fifth inning, falling seven games back in the division, the beleaguered expressions in the clubhouse, the terse answers from the manager, the extended conversation in the hallway between Miguel Cabrera and general manager Al Avila after the clubhouse had mostly cleared – it feels like the season has reached a crisis point for the Tigers.

“Not at all,” said catcher Jarrod Saltalamacchia. “You can’t win it in the first three months of the season. You can lose it, but I don’t think we’re at that point at all. No one is running away with the division. Cleveland is playing really good ball, and we’re not playing our best ball at all and we’re still staying in striking distance.”

Are they? Seven games isn’t an insurmountable distance, but given their struggles against the Royals, who are in second place, and the Indians, who have now beaten the Tigers nine straight times by a combined score of 60-20, it’s going to be a formidable climb.

The clubhouse doors were kept closed to the media about 20 minutes longer than usual after the game and there was no roster move made or announced. Ausmus was asked if he’d spoken to the team.

“If I did, it would be between me and the team,” he said.

The Tigers came into the series riding a four-game sweep of the Mariners and were just four games behind the Indians; it was a pretty fast fall. Especially troubling was the Indians pounded the Tigers’ two top starting pitchers – scoring 15 runs on 18 hits in 8.1 total innings against Verlander and Jordan Zimmermann.

“Give the Indians credit,” Ausmus said. “They came in and stuck it to us. They were playing well before they got here and they played well here all weekend. … They just, right now, have our number. There’s no other way to explain it.”

Verlander had to feel like he was living his worst nightmare. He kept throwing pitches and Indians hitters kept clubbing them over the fence.

“I didn’t make any quality pitches,” he said. “I left a few balls over the middle of the plate and they hit them out. That’s not a great recipe for success.”

The Tigers had tied the game 2-2 in the bottom of the fourth on the first of two home runs by Victor Martinez.

Verlander was coming off a grueling 30-pitch fourth. He hung a first-pitch breaking ball to Juan Uribe leading off the inning – and the fireworks commenced.

Uribe blasted it into the seats in left. Two pitches later, Tyler Naquin hit another off-speed pitch, a change-up at 85 mph, over the wall in right field. Before the inning was over, Mike Napoli (on a slider) and Lonnie Chisenhall (on an off-speed pitch) both hit two-run shots.

Verlander had never given up four home runs in an inning. No Tigers pitcher in history had ever done it. He’d only allowed four homers in a game once – against the Indians in 2007. He had never allowed eight earned runs in a game before.

“It really sucks because I worked my tail off the last month and a half to get back to where I want to be, only to have one start like this blow up in my face,” Verlander said. “Just have to turn the page and move forward.

“But I wish I could’ve done a better job for the team today. It would have been a big win for us. Obviously, it didn’t happen the way anyone drew it up.”

Verlander was asked whether anything needed to be said afterward, either by the team’s leaders or by Ausmus.

“No, we are all professionals,” Verlander said. “We know what we need to do.”

He does not accept the premise that this might just be a .500 baseball team.

The Tigers will have an off-day Monday to lick their wounds and regroup.

“We haven’t been as consistent as we need to be, but we’re still keeping our head above water,” Saltalamacchia said. “We are a much better team than we are showing right now.”

The All-Star break is two weeks away. No time like the present to prove it.

Rotation set for Marlins series; no decision on Sanchez