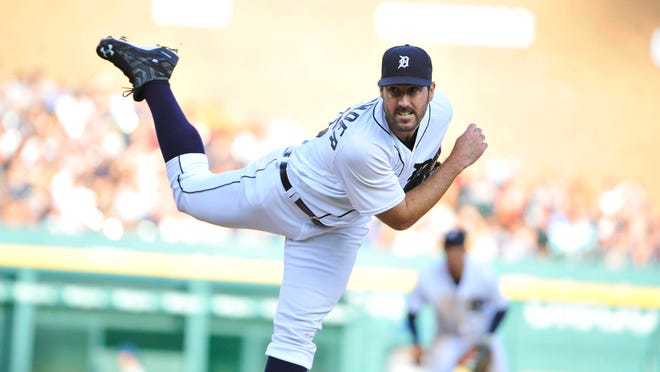 Detroit — Understandably, he doesn’t want to talk about the past.

“Whatever it was, it’s gone,” said Tyler Collins, who was summoned from Triple A Toledo to fill-in for Justin Upton, who left the team after the death of a family member. “That was in the past. Whether it was good or bad, it is gone. I am just ready to keep playing.”

It’s been, without question, the worst baseball year of Collins’ life. In January, he was preparing to be, if not the Tigers’ everyday left fielder, then certainly sharing the position and getting the bulk of the starts against right-handed pitching.

Then the Tigers signed Upton and Collins’ spiral began. He went from thinking he’d be a regular contributor to, best case scenario, being the Tigers' fifth outfielder. He made the team out of spring training, but was sent down on April 25 after he’d produced two hits in 20 at-bats.

Things only got worse. He was hitting .214, with a .274 on-base percentage and .323 slugging percentage for the Mud Hens. Something was clearly wrong — whether it was mental, giving in to the frustrations of the season, or physical — he’s not saying.

Only that he’s better now.

“I am ready to be back and helping out again — that’s for sure,” he said.

He helped, big-time, Friday. His one-out home run to right-center field off Luke Hochevar tied the game and triggered a three-run, game-winning rally in the Tigers' 4-2 win over the Royals.

“I know I can hit the ball hard, day in and day out,” he said. “That’s just basically doing your job. It feels great to help, don’t get me wrong. But it feels better to get the win.”

With Steven Moya struggling both defensively and at the plate recently, Collins has a chance to extend his stay after Upton comes back.

“It’s like I told him when we talked,” manager Brad Ausmus said. “The quickest way to get people to forget what happened here (in the past) is to hit a big home run or get a big hit. This was a good start.”

When pressed on his struggles, he said, “It’s just about relaxing and trusting my abilities again. That was the biggest shuffle — just trusting myself. T.C. is back to being T.C. I just want to go play.”

He was starting to swing the bat better the last couple weeks. In fact, over his last 24 games, he’d hit three home runs, four doubles and knocked in 14 runs. He hit .253 in that stretch.

He was clear, though, that his issues in Toledo weren’t attitudinal.

“No, just things were a little funky,” he said. “It happens. It’s how resilient can you be and getting back to playing how you are supposed to play, how you are capable of playing. I am good to go. We’re ready. There’s no problems any more — that’s for sure.”

Collins got the start in left field Friday night.

Tigers right-fielder J.D. Martinez, out with a fractured right elbow, had a CT scan on Monday to determine how well the bone was healing. The results were positive.

“It showed good healing,” Ausmus said. “He can basically do (baseball) activities as he can tolerate it.”

Before the break, Martinez had begun taking swings off the tee.

“He won’t go right to live pitching,” Ausmus said. “He will hit off the tee, maybe soft-toss. He felt better throwing the ball today. It just comes down to what he can deal with (pain-wise).”

The Tigers are hoping he can return by the end of July, but Ausmus said he will have to do a rehab assignment for a few games before returning to the lineup.

Ausmus said Upton texted him on Monday to alert him of his family situation. The Tigers put him on bereavement leave Thursday.

“It’s personal, but he had a loss in the family,” Ausmus said.

By rule, the earliest Upton would be eligible to return is Sunday.

“Yeah, but he needs to take the time that’s necessary for him,” Ausmus said. “By league rules, Sunday would be the earliest.”

After Mike Pelfrey and Michael Fulmer wrap up the series against the Royals, Ausmus said Matt Boyd and Anibal Sanchez would start the first two games against the Twins Monday and Tuesday.

Ausmus said the health of Daniel Norris (oblique) and Jordan Zimmermann (neck) would determine whether Boyd and Sanchez would get another start after Tuesday.

He was asked if Shane Greene would have been an option to start, and his answer was no.

“Shane Greene wouldn’t be an option,” he said. “He couldn’t go more than a couple innings.”

He also shot down the idea of having a bullpen game, where three or four relievers would work two or three innings.

“But to say you’re going with a bullpen start, it’s kind of tough.”